Our website publishes news, press releases, opinion and advertorials on various financial organizations, products and services which are commissioned from various Companies, Organizations, PR agencies, Bloggers etc. These commissioned articles are commercial in nature. This is not to be considered as financial advice and should be considered only for information purposes. It does not reflect the views or opinion of our website and is not to be considered an endorsement or a recommendation. We cannot guarantee the accuracy or applicability of any information provided with respect to your individual or personal circumstances. Please seek Professional advice from a qualified professional before making any financial decisions. We link to various third-party websites, affiliate sales networks, and to our advertising partners websites. When you view or click on certain links available on our articles, our partners may compensate us for displaying the content to you or make a purchase or fill a form. This will not incur any additional charges to you. To make things simpler for you to identity or distinguish advertised or sponsored articles or links, you may consider all articles or links hosted on our site as a commercial article placement. We will not be responsible for any loss you may suffer as a result of any omission or inaccuracy on the website.
Home News Vaccine deserts: The poor nations trailing in the fight against COVID-19
News 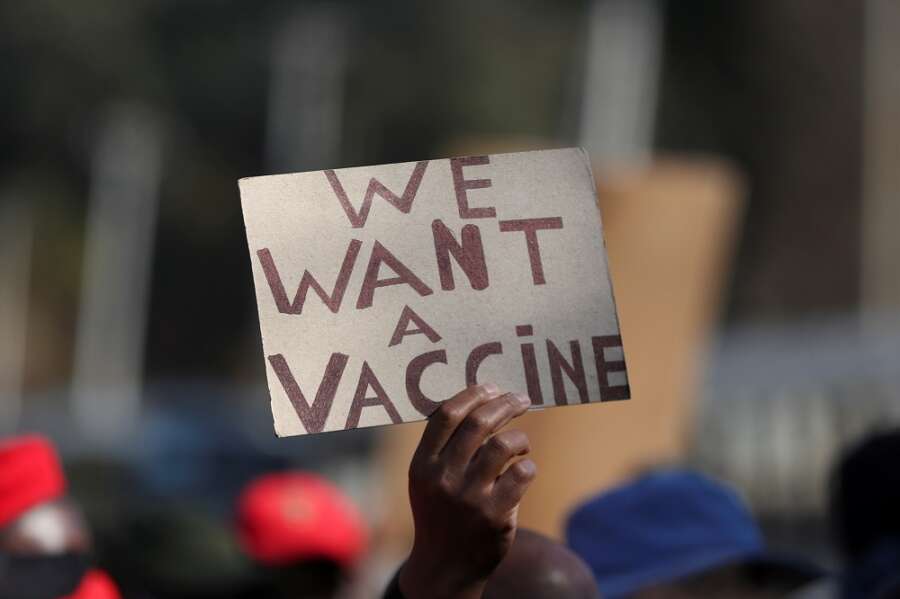 By Nita Bhalla and Anastasia Moloney

NAIROBI/BOGOTA (Thomson Reuters Foundation) – At a private hospital in Burundi’s capital, emergency specialist Emmanuel Kubwayo is worried for the first time since the coronavirus started spreading around the world last year.

Kubwayo initially shared the government’s view that the small central African country did not need COVID-19 vaccines because it had so few cases. But as deaths and infections surge across Africa, he has changed his mind.

Along with Eritrea, Tanzania and North Korea, Burundi is one of a handful of nations that have not started vaccinations, according to the World Health Organization (WHO), potentially threatening global efforts to end the pandemic.

“It’s time to let people who want, and can, to get vaccinated,” said Kubwayo, 53, whose name has been changed to protect his identity.

“Burundi isn’t an isolated island and if we don’t do so, the virus will circulate freely in the country and the region.”

So far, only about 18 million people in Africa, a continent of 1.3 billion, have been fully vaccinated against COVID-19 due largely to vaccine shortages, as well as widespread hesitancy.

But infections and deaths have jumped in recent weeks as more contagious variants take hold, shining a spotlight on the world’s so-called vaccine deserts – places that are either unable or unwilling to undertake mass inoculation.

Burundi’s interior minister, Gervais Ndirakobuca, told reporters last week the government was not against vaccines, pointing to the fact the country has allowed them in for foreigners working for the United Nations and other agencies.

Ndirakobuca, who is also president of the National Commission for the Fight against COVID-19, was not available for comment for this story.

As rich countries open up and start vaccinating less vulnerable younger people, poor countries are struggling to secure vaccines. In Africa and elsewhere, such as Haiti, health authorities have barely begun mass roll-outs.

The gap could widen still further as some governments order millions of booster doses to tackle a spike in cases linked to the highly contagious Delta variant, before others have received supplies for health workers and other high-risk groups.

“The global failure to share vaccines equitably is fuelling the pandemic,” said Tarik Jasarevic, a WHO spokesperson.

“Vaccines are effective against severe disease caused by the variants but variants will continue to flourish if the global inequitable rollout of vaccines is not addressed,” he said.

In Haiti, where the first batch of 500,000 doses finally arrived last week through the international COVAX programme, doctor Wilnick Richard said getting vaccinated would be a relief for health workers battling the nation’s first serious outbreak.

“I worry about getting infected and for my wife because she’s pregnant,” said Richard, 36, chief medical officer at Care 2 Communities, a social enterprise that runs rural health clinics in the Caribbean country.

“If I could get the vaccine, it would be wonderful,” he added.

While a lack of vaccines has been the biggest hurdle to mass immunisations in Africa, Burundi, Tanzania and Eritrea have been outliers – rejecting WHO advice to join COVAX on the grounds they have cases under control. Tanzania has since changed tack.

Eritrea has recorded about 30 coronavirus deaths, while Burundi has reported eight, according to the WHO.

In the United States, a think-tank founded by Eritreans has launched a campaign called #AllowCOVAXforEritrea to put pressure on the government to change course and seek vaccines.

“When you speak to family and friends back home, people are worried about the virus but they’re too scared to say anything about demanding the vaccine,” said cardiologist Habteab Feseha, a member of the Eritrean Research Institute for Policy & Strategy (ERIPS).

“If no vaccines are secured, many innocent people will die needlessly,” he said by phone from Arizona.

Government officials did not respond to a request for comment.

North Korea received approval from COVAX for about 2 million doses, but subsequently rejected planned shipments of AstraZeneca’s vaccine due to concerns over side effects, a South Korean think-tank said earlier this month.

Victor Cha, senior vice president of the Center for Strategic and International Studies (CSIS), a U.S.-based think-tank, said anti-virus restrictions were taking a heavy toll on the reclusive nation.

“The country appears to have been able to avoid such an outbreak by completely shuttering their borders to all contact with the outside world, even more so than is typical for the isolated regime,” said Cha, CSIS Korea Chair.

“But this has come at great cost – the economy is spiraling, commodity prices are rising, and food shortages are expected,” he added.

Economic concerns could eventually sway public opinion in East African vaccine laggard Tanzania, which has only recently acknowledged the risk of COVID-19 following the death of former President John Magufuli – a coronavirus sceptic – in March.

His successor, Samia Suluhu Hassan, has applied to join COVAX and pledged $470 million to buy vaccines and boost the economy.

The tropical island of Zanzibar has seen tourist numbers decline with local residents struggling to make a living.

And while vaccine mistrust is widespread and mask-wearing rare, some islanders said embracing inoculation may be the only way to revive the crucial tourist economy.

“If the whole world is vaccinated, then we should do it too,” said Mohammed Okala, a conservationist and tour guide. “Without the vaccine, we’ll have fewer tourists visiting and we’ll suffer.”

(Reporting by Anastasia Moloney and Nita Bhalla with additional reporting by Kim Harrisberg in Johannesburg and a correspondent in Bujumbura. Editing by Helen Popper. Please credit the Thomson Reuters Foundation, the charitable arm of Thomson Reuters, that covers the lives of people around the world who struggle to live freely or fairly. Visit http://news.trust.org)