Our website publishes news, press releases, opinion and advertorials on various financial organizations, products and services which are commissioned from various Companies, Organizations, PR agencies, Bloggers etc. These commissioned articles are commercial in nature. This is not to be considered as financial advice and should be considered only for information purposes. It does not reflect the views or opinion of our website and is not to be considered an endorsement or a recommendation. We cannot guarantee the accuracy or applicability of any information provided with respect to your individual or personal circumstances. Please seek Professional advice from a qualified professional before making any financial decisions. We link to various third-party websites, affiliate sales networks, and to our advertising partners websites. When you view or click on certain links available on our articles, our partners may compensate us for displaying the content to you or make a purchase or fill a form. This will not incur any additional charges to you. To make things simpler for you to identity or distinguish advertised or sponsored articles or links, you may consider all articles or links hosted on our site as a commercial article placement. We will not be responsible for any loss you may suffer as a result of any omission or inaccuracy on the website.
Home Headlines Russia sharply scales back Far East war games with China
Headlines 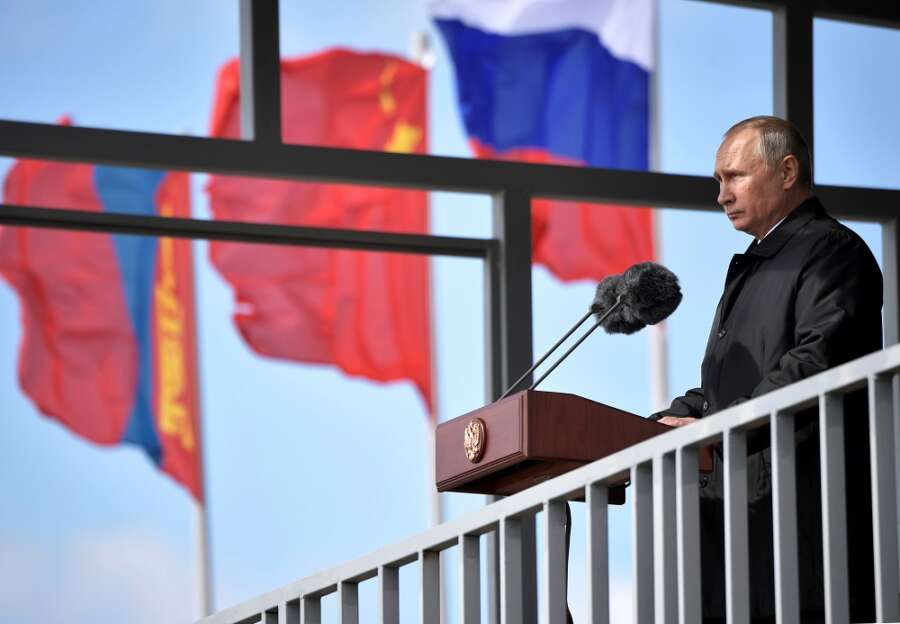 LONDON (Reuters) – Russian military exercises in the Far East this week will take place on a far smaller scale than when they were last held in 2018, reflecting the strain on Moscow’s forces as they struggle to make headway on the battlefields of eastern Ukraine.

Announcing the “Vostok 2022” war games, in which China will also participate, the Russian defence ministry said last month that its capacity to stage such exercises was in no way affected by what Russia calls its “special military operation” in Ukraine.

But the 50,000 personnel that Moscow said on Monday will take part are a fraction of the official figure of 300,000 that were said to be involved four years ago – though some Western military analysts suspect that number was overstated.

The defence ministry said 140 military aircraft and over 5,000 items of military hardware would be deployed – way down on the 1,000 aircraft and 36,000 tanks and armoured vehicles that were reported to have been sent into the 2018 manoeuvres.

“This is going to be the smallest strategic-level exercise in years because the entire ground forces potential is engaged in operations in Ukraine. So the exercise will have to be very small,” said Konrad Muzyka, director of the Rochan military consultancy based in Poland.

Still, the exercises will be closely watched by regional powers such as Japan and South Korea as a significant show of force by Russia and China, which joined up in Vostok 2018 and will take part again in drills on land and at sea.

Russia said its Pacific Fleet and China’s navy would take part in “joint practical actions to defend maritime communications and areas of maritime economic activity” in the Sea of Japan.

Russia has drawn heavily on units from the Far East to reinforce its war effort in Ukraine, thousands of miles to the west, where its forces have sustained heavy losses in men and equipment in the six months since its Feb. 24 invasion while occupying about a fifth of its neighbour’s territory.

Muzyka said he estimated that 70-80% of units from Russia’s eastern military district had been deployed to Ukraine, making it “impossible” for Moscow to free up 50,000 men for exercises. He said a more plausible figure would be 10,000 to 15,000.

“It’s just Russia pretending everything is fine and they still have the capability to launch a large-scale military exercise with China. But in reality I think the scope of this exercise, especially from a ground force perspective, is going to be very, very limited,” he said.

The eastern military district includes part of Siberia and has its headquarters in Khabarovsk, near the Chinese border.

The defence ministry said the exercises would take place from Sept. 1 to 7 and would also involve military contingents and observers from Algeria, India, Laos, Mongolia, Nicaragua, Syria and the former Soviet republics of Armenia, Azerbaijan, Belarus, Kazakhstan, Kyrgyzstan and Tajikistan.

Pain of breaking inflation will reverberate around the globe