Our website publishes news, press releases, opinion and advertorials on various financial organizations, products and services which are commissioned from various Companies, Organizations, PR agencies, Bloggers etc. These commissioned articles are commercial in nature. This is not to be considered as financial advice and should be considered only for information purposes. It does not reflect the views or opinion of our website and is not to be considered an endorsement or a recommendation. We cannot guarantee the accuracy or applicability of any information provided with respect to your individual or personal circumstances. Please seek Professional advice from a qualified professional before making any financial decisions. We link to various third-party websites, affiliate sales networks, and to our advertising partners websites. When you view or click on certain links available on our articles, our partners may compensate us for displaying the content to you or make a purchase or fill a form. This will not incur any additional charges to you. To make things simpler for you to identity or distinguish advertised or sponsored articles or links, you may consider all articles or links hosted on our site as a commercial article placement. We will not be responsible for any loss you may suffer as a result of any omission or inaccuracy on the website.
Home Headlines U.S. says it has agreed Pacific Islands partnership, offering ‘big dollar’ aid
Headlines 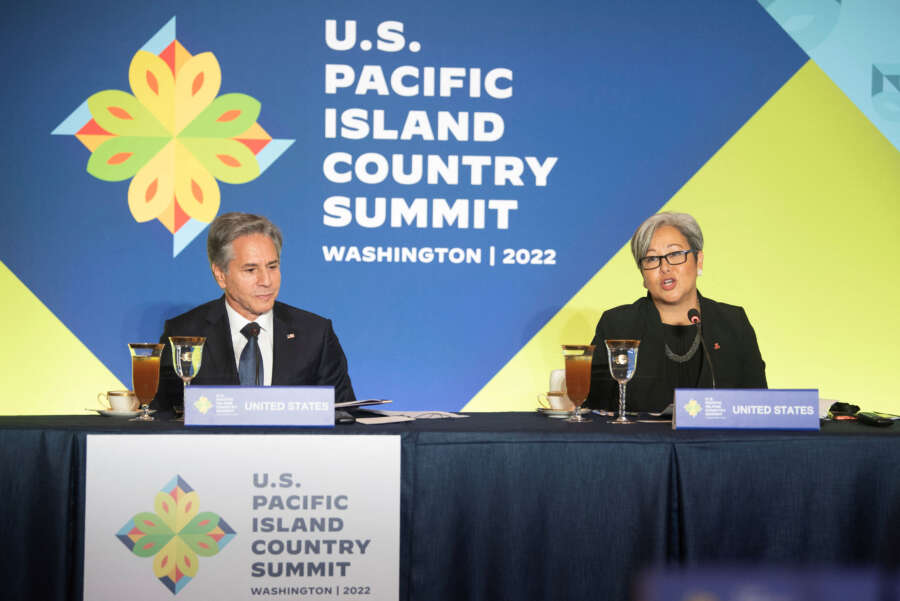 WASHINGTON (Reuters) -The United States said at a summit with Pacific island leaders on Wednesday that it had agreed on a partnership for the future with them and held out the prospect of “big dollar” help to a region where it hopes to stem China’s expanding influence.

The Washington Post quoted U.S. officials as saying the Biden administration would announce an investment of more than $860 million in expanded programs to aid the islands at the two-day summit, on top of more than $1.5 billion provided in the past decade.

The White House had no immediate comment on the funding figure, but a U.S. official said the newspaper’s reporting that all the visiting leaders had endorsed an 11-point statement of vision committing to joint endeavors was accurate.

They included Solomon Islands Prime Minister Manasseh Sogavare, whose government had earlier indicated it would not sign the declaration, raising further concerns about his ties to China. Sogavare’s spokesman had no immediate comment.

An unsigned draft of the declaration seen by Reuters said the leaders resolved to strengthen their partnership and shared a vision for region where “democracy will be able to flourish.”

The draft underscored the importance of the United Nations Convention on the Law of the Sea and freedom of navigation and overflight, while condemning Russia’s war in Ukraine.

It also said the United States remained committed to addressing the Marshall Islands’ environmental and health concerns, without specifically mentioning the legacy of U.S. nuclear testing there in the 1940s and ’50s.

An official who briefed journalists ahead of the meeting acknowledged Washington had not paid the Pacific enough attention and would come up with new initiatives with “big-dollar numbers.”

It is the first time the United States has been host to so many leaders of a region it has considered its maritime backyard since World War Two, but into which China has been making steady advances. Some of the nations have complained about being caught in the middle of the superpowers’ battle for influence.

Leaders and representatives from 14 Pacific island states are taking part in the summit.

White House Indo-Pacific coordinator Kurt Campbell said last week the summit would focus on issues such as climate change and health. Washington and its allies want to boost maritime security and island states’ communication links with countries like Japan, Australia and India, he said.

The leaders are being feted around Washington and on Thursday will have lunch at the U.S. Congress and dinner at the White House with President Joe Biden.

Addressing the summit opening at the State Department, U.S. Secretary of State Antony Blinken said the two sides had agreed “a declaration of partnership between the U.S. and the Pacific.”

Holding up a document, he said it showed the United States and the Pacific have a “shared vision for the future and a determination to build that future together.”

Blinken said the shared vision “recognizes that only by working together can we actually tackle the biggest challenges of our time, that confront all of our citizens.”

He cited the climate crisis, health emergencies, promoting economic opportunity, and preserving a “free and open Indo-Pacific” where every nation regardless of size “has the right to choose its own path.”

In a statement on the first day of the talks, Henry Puna, secretary general of the Pacific Islands Forum, said he was confident the islands and the United States “can, and … will secure and build a partnership.”

He said an outcomes document was expected to be released after a face-to-face discussion with Biden.

Strategic competition in the Pacific intensified dramatically this year after China signed a security agreement with the Solomons, prompting warnings of militarization of the region.

“It really came from your persistence and commitment, so I want to thank you for that. It made a difference to the world,” he said.

A source familiar with the discussions said the White House was working with the private sector to roll out an agreement on undersea cables for the region, calling it “a reaction to China’s diplomacy and military expansion.”

The Pacific states are eager for greater connectivity amongst themselves and with allies, however they have repeatedly stressed Washington should accept their priorities, making climate change – not superpower competition – the most urgent security task.

Micronesian President David Panuelo said on Tuesday participants had been working on a summit declaration that would cover five themes, including human-centered development, tackling climate change, geopolitics and security, as well as commerce and industry and trade.

Leaders from the Federated States of Micronesia, the Marshall Islands, Papua New Guinea, the Solomon Islands, Samoa, Tuvalu, Tonga, Fiji, Cook Islands, French Polynesia and New Caledonia have attended the summit as well as representatives from Vanuatu, Nauru and Palau.