Our website publishes news, press releases, opinion and advertorials on various financial organizations, products and services which are commissioned from various Companies, Organizations, PR agencies, Bloggers etc. These commissioned articles are commercial in nature. This is not to be considered as financial advice and should be considered only for information purposes. It does not reflect the views or opinion of our website and is not to be considered an endorsement or a recommendation. We cannot guarantee the accuracy or applicability of any information provided with respect to your individual or personal circumstances. Please seek Professional advice from a qualified professional before making any financial decisions. We link to various third-party websites, affiliate sales networks, and to our advertising partners websites. When you view or click on certain links available on our articles, our partners may compensate us for displaying the content to you or make a purchase or fill a form. This will not incur any additional charges to you. To make things simpler for you to identity or distinguish advertised or sponsored articles or links, you may consider all articles or links hosted on our site as a commercial article placement. We will not be responsible for any loss you may suffer as a result of any omission or inaccuracy on the website.
Home Headlines Challenging ‘orthodoxy,’ Kwarteng clings on after UK market rout
Headlines 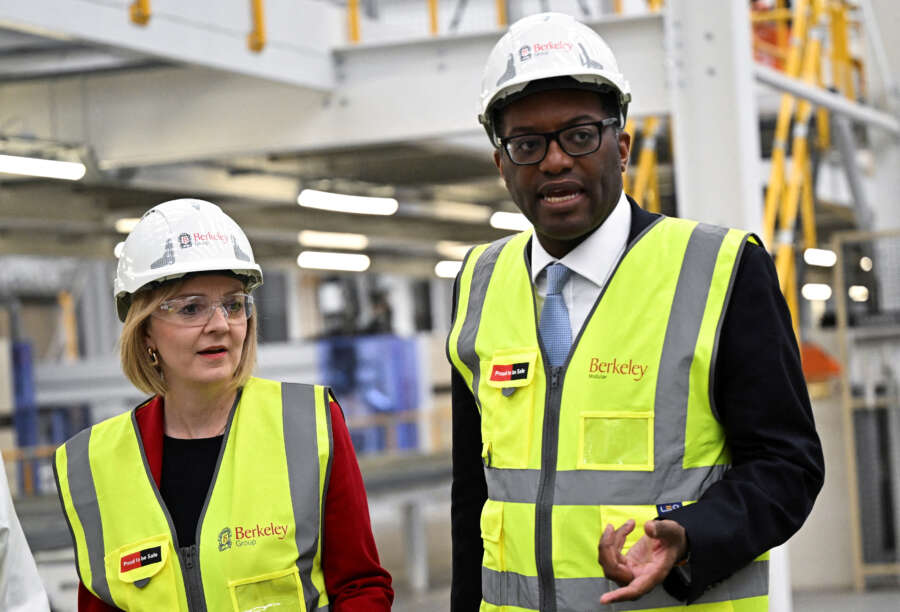 Instead he’s seen his first fiscal statement take down the pound, the bond market, his party’s reputation for financial credibility and quite possibly his own political career.

Truss was selected by Conservative members earlier this month to run the country on a low-tax agenda which vowed to challenge “Treasury orthodoxy” to get the country moving again.

Charged with delivering this vision, Kwarteng fired the finance ministry’s most senior official and unveiled a swathe of unfunded tax cuts with a view of turning “the vicious cycle of stagnation into a virtuous cycle of growth”.

What the 47-year-old unleashed was a vicious cycle of falling market confidence, flight from British assets and such damage to the British bond markets that the Bank of England was forced to start buying bonds.

A source at the Treasury said Kwarteng had no plans to resign or reverse any policies. Another person familiar with the situation said Truss was standing by her finance minister, whose official title is Chancellor of the Exchequer.

“The PM and the Chancellor are working on the supply side reforms needed to grow the economy which will be announced in the coming weeks,” a spokesman for Truss said.

Investors, traders, government officials and even some lawmakers from the ruling Conservative Party are increasingly of the view that to fix the situation, there will have to be policy reversals or even Kwarteng’s resignation.

One government source, who worked closely with Kwarteng in the past, told Reuters it was hard to see how he could survive. “He and Truss are close, and you have to wonder whether she is ruthless enough to axe one of her longest-standing allies this soon in her tenure.”

The source noted that Truss had backed the plan throughout.

Support for the governing Conservative Party has sunk, a YouGov poll showed this week, with key planks of the economic plan unpopular with voters.

Keiran Pedley, a research director at pollster Ipsos, said early data showed the opposition Labour Party was increasingly more trusted to manage the economy, spelling danger for the government heading into the next election, expected in 2024.

“If that continues, that’s a real problem for the Conservatives because that has typically been one of their key brand assets,” he told Reuters.

Britain’s first Black Chancellor, Kwarteng is the son of Ghanaian immigrants. He attended Eton, one of Britain’s most prestigious private schools, which has been the alma mater of numerous politicians. Kwarteng scored a “double-first” at Cambridge University in Classics and History, as well as attending Harvard University in the United States.

He was appointed on Sept. 6, and has to last another week in the job if he is to avoid being the shortest tenured Chancellor in British political history.

In Kwarteng, Truss picked a key ideological ally with whom she co-wrote a book that spells out a low tax, small state, deregulated vision of Britain.

A lawmaker since 2010 and economic historian known for his intellect, some said Kwarteng didn’t have the experience to run the huge finance ministry. A veteran Conservative source said before his appointment that the Treasury would “approve of his brain (but) disapprove of his independence.”

That desire to do things differently was exemplified when he immediately fired Tom Scholar as Permanent Secretary to the Treasury, with Scholar saying “the Chancellor decided it was time for new leadership.”

Paul Johnson, director of the Institute for Fiscal Studies, said the fall-out from Friday’s mini-budget showed why economic “orthodoxy” should be welcomed as evidence-based knowledge.

“It needs testing and challenging, but experience tells us that simply dismissing it is dangerous indeed,” he said on Twitter.

Truss’s and Kwarteng’s determination to sideline doubting voices was also reflected in the makeup of the first cabinet of ministers, where no backers of leadership rival Rishi Sunak were given roles.

Sunak had warned during the leadership campaign that Truss’s plans put Britain’s economic credibility in jeopardy, but she dismissed his caution as “negative, declinist language.”

Kwarteng has been equally dismissive of criticism of his Sept. 23 fiscal statement, stressing that it would drive growth.

“What was unacceptable and unsustainable was the idea that we were going to have tax being at a 70-year high and that we could continue simply raising taxes. That was unsustainable, and something had to change, and I’m very pleased we changed that,” he told the BBC on Sunday.

He has declined to comment on the market rout.

One other aspect that raised investor ire was Kwarteng’s decision to release a fiscal plan without the accompanying scrutiny of the independent Office for Budget Responsibility.

As investors processed the details, markets started to tank: the pound hit a record low against the dollar in early trade on Monday, long-dated bond yields hit a twenty year high on Wednesday, and the International Monetary Fund called for a rethink.

“He’s not going to feel culpable for any of the chaos in markets right now,” the government source said of Kwarteng. “He will be saying: the medicine tastes bad but the country needs to swallow this.”

Kwarteng will set out a medium term fiscal plan alongside OBR forecasts on the scale of government borrowing on Nov. 23.

First he must address the party’s annual conference next week, with discontent already spilling into the open.

“These are not circumstances beyond the control of government (or the) Treasury. They were authored there,” lawmaker Simon Hoare said. “This inept madness cannot go on.”

For some, Kwarteng, a committed supporter of Brexit, has form for downplaying market movements, with the London Evening Standard newspaper reporting overhead comments he made on the night Britain stunned markets by voting to leave the European Union.

“Who cares if sterling crashes?” he reportedly said. “It will come back up again.”