Our website publishes news, press releases, opinion and advertorials on various financial organizations, products and services which are commissioned from various Companies, Organizations, PR agencies, Bloggers etc. These commissioned articles are commercial in nature. This is not to be considered as financial advice and should be considered only for information purposes. It does not reflect the views or opinion of our website and is not to be considered an endorsement or a recommendation. We cannot guarantee the accuracy or applicability of any information provided with respect to your individual or personal circumstances. Please seek Professional advice from a qualified professional before making any financial decisions. We link to various third-party websites, affiliate sales networks, and to our advertising partners websites. When you view or click on certain links available on our articles, our partners may compensate us for displaying the content to you or make a purchase or fill a form. This will not incur any additional charges to you. To make things simpler for you to identity or distinguish advertised or sponsored articles or links, you may consider all articles or links hosted on our site as a commercial article placement. We will not be responsible for any loss you may suffer as a result of any omission or inaccuracy on the website.
Home News COVID-testing rules spark Christmas travel chaos in Australia as cases hit records
News 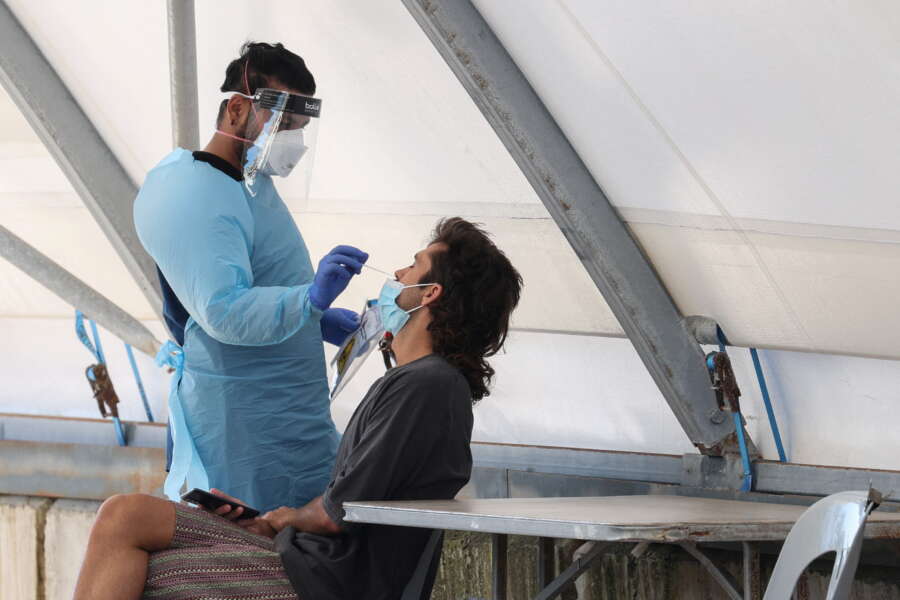 SYDNEY (Reuters) – Australia’s COVID-19 testing facilities were severely stretched on Thursday amid a record surge in cases and as tens of thousands of domestic travellers thronged the centres to get test results necessary to travel interstate for Christmas.

Most states require travellers to have a negative test result 72 hours before departure in order to be allowed entry, even as Prime Minister Scott Morrison urged them to ease the testing requirement, which he said was redirecting resources that could be used to ramp up the rollout of the booster shots.

More than 8,200 new cases were reported in Australia on Thursday, the biggest daily rise in the pandemic, eclipsing the previous high of some 5,600 a day earlier. The bulk of cases are in its most populous states of New South Wales and Victoria.

Despite the spike, people in hospitals remains far lower than during the Delta wave as active coronavirus cases in the country neared 44,000.

Around 800 COVID-19 patients are in hospitals across the country as of Dec. 20 but only 37 of those are Omicron cases, the health department said in an emailed response. Only one case is in intensive care and no deaths have been reported.

Morrison had been asking people to focus more on the number of people in hospitals than the total infections and resisted calls for a national mandatory rule to wear masks indoors.

But Victorian state authorities said they would make masks mandatory indoors from Thursday night, while Queensland state also has mandatory mask rules, with health officials saying the spread of the virus has become “inevitable and necessary”.

“In order for us to go from the pandemic phase to an endemic phase, the virus has to be widespread. We all have to have immunity,” Queensland Chief Health Officer John Gerrard told reporters.

Even amid the Omicron wave, Australia’s tally of 273,000 infections and 2,173 deaths is far lower than many countries.