Home Headlines Auto suppliers feel the green squeeze as carmakers get clean
Our website publishes news, press releases, opinion and advertorials on various financial organizations, products and services which are commissioned from various Companies, Organizations, PR agencies, Bloggers etc. These commissioned articles are commercial in nature. This is not to be considered as financial advice and should be considered only for information purposes. It does not reflect the views or opinion of our website and is not to be considered an endorsement or a recommendation. We cannot guarantee the accuracy or applicability of any information provided with respect to your individual or personal circumstances. Please seek Professional advice from a qualified professional before making any financial decisions. We link to various third-party websites, affiliate sales networks, and to our advertising partners websites. When you view or click on certain links available on our articles, our partners may compensate us for displaying the content to you or make a purchase or fill a form. This will not incur any additional charges to you. To make things simpler for you to identity or distinguish advertised or sponsored articles or links, you may consider all articles or links hosted on our site as a commercial article placement. We will not be responsible for any loss you may suffer as a result of any omission or inaccuracy on the website.
Headlines

Auto suppliers feel the green squeeze as carmakers get clean 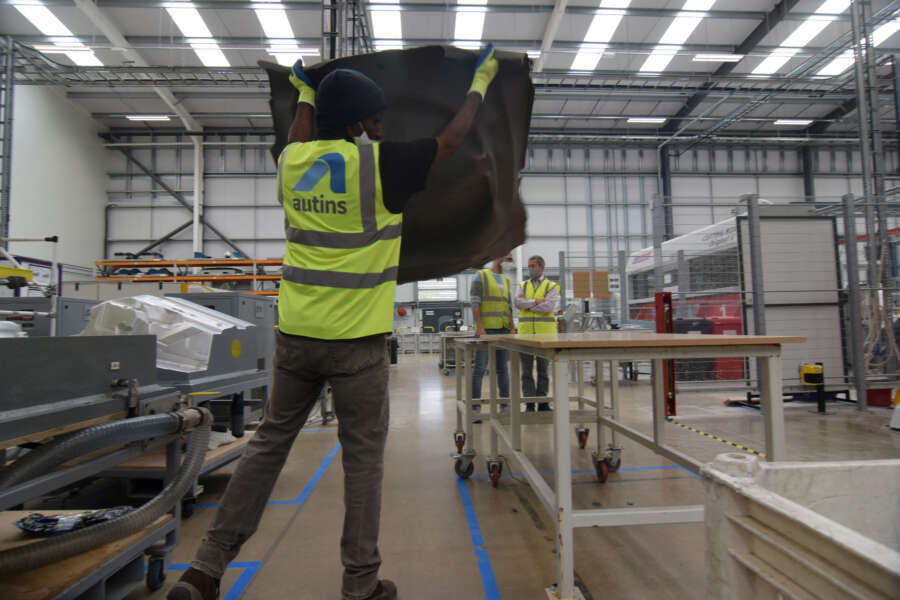 TAMWORTH, England (Reuters) – The auto industry’s drive to a greener and cleaner future is a treacherous road for companies in its beleaguered supply chain. Only the strong and the shrewd may survive.

Many auto suppliers, already squeezed by rampant inflation and energy prices, say they have little choice but to shoulder the extra costs of making their components sustainable to meet carmakers’ environmental targets.

“If you don’t, you’re not going to have a business in five or six years supplying major carmakers,” said Shane Kirrane, commercial director at Autins Group, which has plants in Britain, Sweden and Germany that make acoustic and thermal insulation for cars.

All major carmakers have committed to green targets, seeking to purge dirtier materials from their supply chains to satisfy regulators and investors as they transition to electric vehicles (EVs).

BMW, for instance, expects all of its battery and many of its steel and aluminium providers to produce materials made using renewable energy, while Volvo is targeting 25% recyclable plastic in its cars by 2025.

Many suppliers are consequently making large investments to green up their acts, from developing recyclable parts to hooking up their businesses to renewable energy, according to interviews with more than a dozen industry players.

At the same time, many say they have little leeway to raise the prices they charge big automakers, which are themselves laser-focused on costs as they shell out tens of billions of dollars to reinvent themselves for a lower-carbon era.

“We use the term disruptive all the time, but it’s much more than just disruptive,” said Joe McCabe, CEO of researcher AutoForecast Solutions. “We’re going to see a real big shakeout the next five, 10 years in the auto supply chain.”

Philadelphia-based AutoForecast compiles auto industry production estimates and advises suppliers on whether the requests-for-quotes (RFQs) they receive from carmakers are based on realistic assumptions for vehicle production volumes.

“Suppliers are being asked to develop new technologies to support EVs and invest in a greener supply chain with (high) volumes we don’t believe are obtainable based on the actual RFQs,” McCabe added. “But carmakers are also telling suppliers: ‘If you want to be part of this new green revolution, give me the best price possible so I don’t go to your competition’.”

Carmakers are often reluctant to discuss contractual relationships with suppliers.

Mercedes-Benz, which aims to extensively use recyclable material and “green” steel made using renewable energy in its cars, told Reuters it was fully aware that going to zero emissions was “a monumental task” for suppliers.

It said that it planned to reach this goal collaboratively, including providing training to suppliers or shared research and development.

Volkswagen, targeting a 30% reduction in CO2 emissions for its vehicles including their supply chain, said it has a collaborative relationship with suppliers, citing a joint programme it created to tackle rising energy prices, without providing details.

Going green is costly for even the biggest suppliers, such as American Swiss connector maker TE Connectivity, according to its chief technology officer Ralf Klaedtke. The company, which is worth about $39 billion, launched its own sustainability drive in 2020 and is working on recyclable products with carmakers including Volkswagen, Volvo and BMW.

“For smaller suppliers, the challenge is even more severe,” Klaedtke said. “The suppliers that don’t qualify for sustainability will be ruled out of the procurement process.”

For Britain’s Autins, which had revenue of about 23 million pounds ($26 million) for the fiscal year ending September 2021, one part of the green solution is to shift to 100% renewable energy later this year, according to CEO Gareth Kaminski-Cook, speaking at the company’s plant in Tamworth, central England.

He said this would cost his company several thousands of pounds more per year – the cost of building out infrastructure to connect renewable energy to the grid is passed on to business customers. Eventually, though, those bills will come down.

The publicly-traded company has also been pursuing its own green targets to satisfy shareholders.

Autins, whose customers include Volkswagen and Jaguar Land Rover, has invested about 50,000 pounds in developing a recyclable insulation material that should be ready around the end of 2022, Kaminski-Cook added.

Plastic and rubber component maker Sigit, with annual revenue of around $200 million, spent 10 million euros in 2019-20 on a research centre in Turin that has developed a recyclable thermoplastic composite bracket 90% lighter than the previous metal part.

CEO Emanuele Buscaglione said supply-chain problems that began during the pandemic plus soaring costs had “killed our margins” and “created the perfect storm” for the industry.

The Swiss-Italian company spent three years developing the bracket and now has its first contract, for vans made by Stellantis, the world’s No. 4 carmaker, Buscaglione added.

“We are trying to concentrate the few resources we have available on innovation,” said the CEO. He added, though, that Sigit’s carmaker customers had been unwilling to pay any more for new, greener products so far, even the luxury brands.

The challenge of passing on added costs to customers is “anything but trivial,” Buscaglione says.

M. Busch, which makes cast-iron parts including brake discs and gearboxes in North-Rhine Westphalia, wants to shift from burning coke to “biocoke” made from organic waste, use renewable energy and replace gas for melting the metal with hydrogen, owner Andreas Guell said.

But the organic waste is hard to find, there is not enough hydrogen fuelling infrastructure to meet his needs while renewable energy is still expensive compared with conventional power, he added.

Guell says carmakers only want to work with suppliers who use green energy, leaving him in a tight spot.

German aluminium supplier Gerd Roeders, the owner of G.A. Roeders, which provides material for Volkswagen and Continental, wants to shift to a hydrogen-and-gas mix from just gas, but says government and carmaker support is needed to build green infrastructure.

“To be innovative, the supplier industry needs money,” Roeders said. “We feel a bit stuck.”

(Reporting by Nick Carey in Tamworth, Victoria Waldersee in Berlin and Giulio Piovaccari in Milan; Editing by Pravin Char)