Our website publishes news, press releases, opinion and advertorials on various financial organizations, products and services which are commissioned from various Companies, Organizations, PR agencies, Bloggers etc. These commissioned articles are commercial in nature. This is not to be considered as financial advice and should be considered only for information purposes. It does not reflect the views or opinion of our website and is not to be considered an endorsement or a recommendation. We cannot guarantee the accuracy or applicability of any information provided with respect to your individual or personal circumstances. Please seek Professional advice from a qualified professional before making any financial decisions. We link to various third-party websites, affiliate sales networks, and to our advertising partners websites. When you view or click on certain links available on our articles, our partners may compensate us for displaying the content to you or make a purchase or fill a form. This will not incur any additional charges to you. To make things simpler for you to identity or distinguish advertised or sponsored articles or links, you may consider all articles or links hosted on our site as a commercial article placement. We will not be responsible for any loss you may suffer as a result of any omission or inaccuracy on the website.
Home Headlines With solemn ceremony, Scots pay tribute to late Queen Elizabeth and welcome new king
Headlines 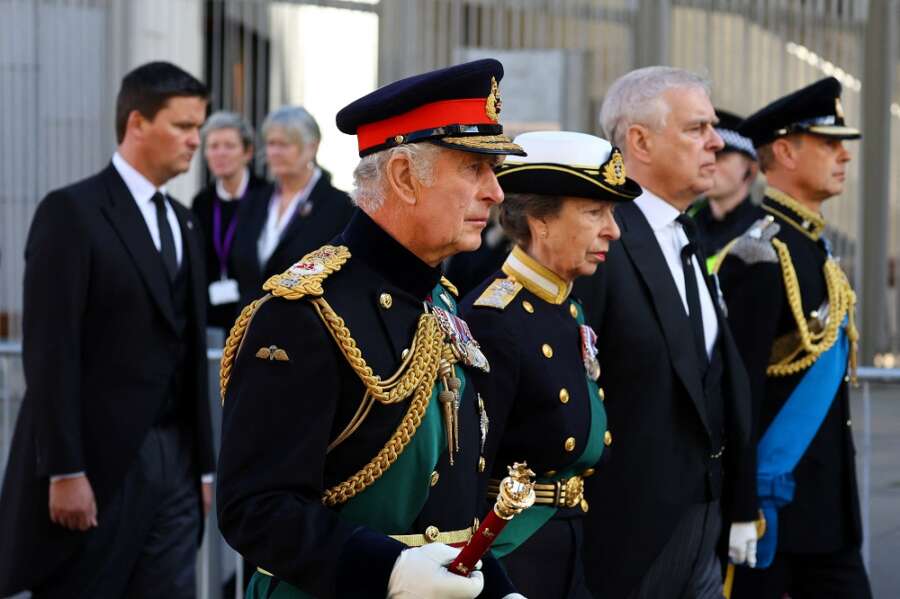 By Andrew MacAskill and Lindsay Dunsmuir

EDINBURGH (Reuters) – The late Queen Elizabeth’s coffin was taken along the Royal Mile in the Scottish capital Edinburgh on Monday in a silent and solemn procession watched by thousands of people paying their respects to Britain’s longest serving monarch.

The oak coffin, draped in the Royal Standard of Scotland and with a wreath of white flowers placed on top, was then carried into St. Giles Cathedral and the crown of Scotland laid on it.

While a grieving crowd – with many people in tears – stood outside, King Charles and other members of the royal family, as well as political leaders and dignitaries, attended a service of thanksgiving for the queen.

The coffin will lie in St Giles’ Cathedral for an overnight vigil before being flown to London on Tuesday.

Queen Elizabeth died on Thursday in her holiday home at Balmoral, in the Scottish Highlands, at the age of 96 after a 70-year reign, plunging the nation into mourning even as it faces an economic crisis and a change of government.

Charles became king on her death and was formally proclaimed as monarch on Saturday.

The queen’s coffin arrived from Balmoral on Sunday and stood overnight at the Palace of Holyroodhouse, the monarch’s official residence in Scotland.

A bagpipe lament was the only sound as kilted soldiers from the Royal Regiment of Scotland bore the casket from the palace and placed it in the hearse for the short journey to the cathedral.

A gun salute boomed out from a battery on Edinburgh Castle when the hearse moved off and a single round was fired each minute of the procession up the historic street. Other than that there was just silence – except a brief shout from a heckler aimed at Prince Andrew.

Under a sunny sky, King Charles and his siblings – Anne, Andrew and Edward – walked slowly behind the hearse, while the Royal Company of Archers provided the guard of honour.

At the service, Scotland’s First Minister Nicola Sturgeon read from Eccliastes and folk singer Karen Matheson sang a psalm in Gaelic, while other speakers paid tribute the late queen.

Tina Richardson, 63, a retiree from Dunbar, was among those standing on the centuries-old Royal Mile beside the cathedral. She said her middle name was Elizabeth after the late queen.

“There’ll never be anyone like her,” she told Reuters. “She was such a beautiful lady who gave us all so much. She dedicated her whole life to the country. In good times and bad she was there, especially during COVID. She united everybody.”

Ellie Merton, 52, an arts producer, who travelled up from the border region of Scotland, said: “It was very dignified and appropriate. We had pipers, horses and archers. There was the sense of the Scottish community being around here as she made her final journey. It was all done according to her affinity to Scotland.

“Charles is overseeing the change seamlessly. And we need that. The monarchy is the centrifugal point of our political set-up. If you don’t have a monarch then everything falls apart.”

Earlier on Monday in London, King Charles had addressed members of the British parliament at Westminster Hall.

He called parliament the “living and breathing instrument of our democracy” and pledged to follow his late mother’s example in maintaining its independence.

As with all the ceremonies taking place to mark the queen’s death and Charles’ accession to the throne, there was much pageantry.

He arrived at Westminster Hall to a fanfare of trumpets with his wife Camilla, Queen Consort. The royal couple sat on ceremonial chairs, with cavalry troopers in red tunics and plumed helmets standing to attention behind.

Charles, 73, told members of the House of Commons and the House of Lords: “While very young, Her late Majesty pledged herself to serve her country and her people and to maintain the precious principles of constitutional government which lie at the heart of our nation. This vow she kept with unsurpassed devotion.

“She set an example of selfless duty which, with God’s help and your counsels, I am resolved faithfully to follow.”

The assembly then sang “God Save the King”.

Charles, who is now king of the United Kingdom and 14 other realms including Australia, Canada, Jamaica, New Zealand and Papua New Guinea, is known for expressing his views on matters ranging from the environment to youth issues.

He has suggested that as king, he might have to moderate his style, in keeping with the tradition that the monarch keeps out of political matters.

On Sunday, the queen’s coffin was taken by hearse on a six-hour journey from Balmoral through picturesque Scottish countryside, villages, towns and cities to Edinburgh.

Tens of thousands of well-wishers lined the roads to pay their respects.

On Tuesday, the coffin will be flown to London, where on Wednesday it will begin a period of lying in state until Sept. 19 – the day of Elizabeth’s state funeral https://www.reuters.com/world/uk/world-leaders-come-london-queen-elizabeths-funeral-2022-09-12 – on a catafalque at Westminster Hall.

In London, members of the public will be allowed to process past the coffin, which will be covered by the Royal Standard with the sovereign’s Orb and Sceptre placed on top, for 24 hours a day until 6.30 a.m. (0530 GMT) on Sept. 19.

The government said those wishing to do so should expect to queue for many hours and possibly overnight due to the number of people expected.

Thousands of people gathered at royal palaces across Britain, bringing flowers. In Green Park near Buckingham Palace, where some of the tributes are being taken, long lines of bouquets now snake around the park.

Britain last saw such a display of public mourning in 1997 after the death of Charles’s first wife, Princess Diana, in a Paris car crash.

In his first public comment since the queen’s death, Prince Harry – Diana’s son – paid an emotional tribute to his “granny” on Monday, saying she would be sorely missed not just by the family, but the world over.

“We, too, smile knowing that you and grandpa are reunited now, and both together in peace,” Harry said, a reference to Elizabeth’s husband of 73 years Prince Philip who died last year.