Home Business U.S. weekly jobless claims increase; third-quarter growth raised
Our website publishes news, press releases, opinion and advertorials on various financial organizations, products and services which are commissioned from various Companies, Organizations, PR agencies, Bloggers etc. These commissioned articles are commercial in nature. This is not to be considered as financial advice and should be considered only for information purposes. It does not reflect the views or opinion of our website and is not to be considered an endorsement or a recommendation. We cannot guarantee the accuracy or applicability of any information provided with respect to your individual or personal circumstances. Please seek Professional advice from a qualified professional before making any financial decisions. We link to various third-party websites, affiliate sales networks, and to our advertising partners websites. When you view or click on certain links available on our articles, our partners may compensate us for displaying the content to you or make a purchase or fill a form. This will not incur any additional charges to you. To make things simpler for you to identity or distinguish advertised or sponsored articles or links, you may consider all articles or links hosted on our site as a commercial article placement. We will not be responsible for any loss you may suffer as a result of any omission or inaccuracy on the website.
Business 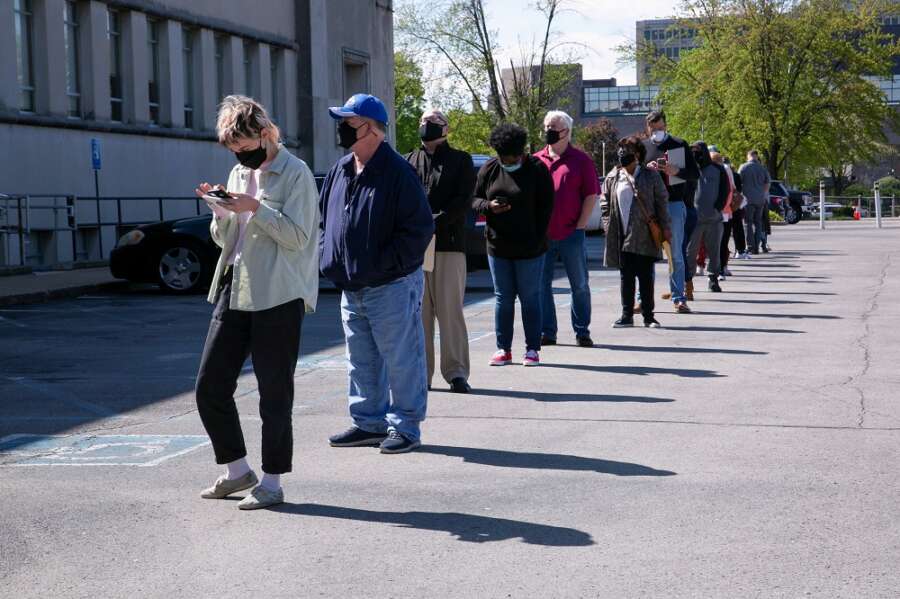 Still, the third straight weekly increase in jobless claims reported by the Labor Department on Thursday could raise concerns that slowing economic growth could persist beyond the third quarter. Economic activity has cooled because of a resurgence in COVID-19 cases, driven by the Delta variant of the coronavirus, and the fading boost from pandemic relief money from the government.

“This is not just the Delta variant. It could be the start of a significant slowdown in economic growth, which would make it harder for those who lost their jobs in the pandemic to regain their positions or find new opportunities,” said Christopher Rupkey, chief economist at FWDBONDS in New York.

Initial claims for state unemployment benefits rose 11,000 to a seasonally adjusted 362,000 for the week ended Sept. 25. Economists polled by Reuters had forecast 335,000 applications for the latest week. Claims have been rising, with economists blaming a range of factors including wildfires in California and the lingering effects of Hurricane Ida, which struck the Gulf Coast in late August and caused record flooding in New York and New Jersey in early September.

The latest wave of coronavirus infections could also have caused some companies in the high contact services sectors to layoff workers. The upheaval caused by the pandemic has also made it harder to adjust the data for seasonal fluctuations.

Unadjusted claims, which economists say offer a better read of the labor market, fell 8,326 to 298,255 last week. Claims in California increased 17,978 last week, adding to the 17,218 rise in the prior week. California offered no reasons for the string of increases.

There was also a rise in applications in Michigan last week, likely related to the idling of assembly plants by some automakers as they try to manage their supply of semiconductors amid a global shortage. Claims in Texas also rose significantly. There were, however, big declines in filings in Virginia, Maryland, Arizona, Ohio and Louisiana.

Claims, which have dropped from a record 6.149 million in early April 2020, remain well above their pre-pandemic levels.

With economic activity appearing to be picking up after being restrained by the latest coronavirus wave, claims are likely to decline in the weeks ahead. There are indications that infections are subsiding, though deaths remain high.

“Fortunately the wave has crested, but just as with previous waves, it takes a few weeks at least before consumers return to certain businesses, and those businesses stop laying off workers,” said Robert Frick, corporate economist at Navy Federal Credit Union in Vienna, Virginia. “The downward trend could resume in October.”

The claims report also showed the number of people continuing to receive benefits after an initial week of aid dropped 18,000 to 2.802 million in the week ended Sept. 18, a sign that more people were finding work.

The so-called continuing claims covered the week during which the government surveyed households for September’s unemployment rate. Continuing claims decreased slightly between the August and September survey periods.

The claims data is being watched for signs of how soon a shortage of workers, which is constraining hiring, will start easing after the expiration early this month of federal government-funded benefits.

Those expanded benefits were blamed by businesses and Republicans for keeping the unemployed at home. There were a record 10.9 million open jobs at the end of July.

More than 8 million people are estimated to have lost all their pandemic benefits on Sept. 6. As a result the total number of people receiving unemployment checks under all programs dropped to 5.028 million during the week ended Sept. 11 from 11.250 million in the prior week.

“So far, evidence from the states that ended benefits early over the summer suggests that even with the end of unemployment benefits nationally, there is unlikely to be a sudden and large return to the labor force,” said Veronica Clark, an economist at Citigroup in New York.

The economy created 235,000 jobs in August, the fewest in seven months. Lack of childcare, fears of contracting the coronavirus and pandemic-related career changes have been blamed for the worker shortage.

A separate report from the Commerce Department on Thursday confirmed that economic growth accelerated in the second quarter, thanks to fiscal stimulus, which boosted consumer spending. Gross domestic product increased at a 6.7% annualized rate, the department said in its third estimate of GDP growth for the April-June quarter. That was revised up from the 6.6% pace of expansion reported in August.

The economy grew at a 6.3% rate in the first quarter. Growth, however, looks to have slowed in the third quarter because of the Delta variant as well as shortages of raw materials, which have hurt motor vehicle sales and constrained home building and purchases.

Growth estimates for the third quarter are below a 5% rate.

Analysis: From chips to ships, shortages are making inflation stick