Our website publishes news, press releases, opinion and advertorials on various financial organizations, products and services which are commissioned from various Companies, Organizations, PR agencies, Bloggers etc. These commissioned articles are commercial in nature. This is not to be considered as financial advice and should be considered only for information purposes. It does not reflect the views or opinion of our website and is not to be considered an endorsement or a recommendation. We cannot guarantee the accuracy or applicability of any information provided with respect to your individual or personal circumstances. Please seek Professional advice from a qualified professional before making any financial decisions. We link to various third-party websites, affiliate sales networks, and to our advertising partners websites. When you view or click on certain links available on our articles, our partners may compensate us for displaying the content to you or make a purchase or fill a form. This will not incur any additional charges to you. To make things simpler for you to identity or distinguish advertised or sponsored articles or links, you may consider all articles or links hosted on our site as a commercial article placement. We will not be responsible for any loss you may suffer as a result of any omission or inaccuracy on the website.
Home Business Thomson Reuters lifts sales outlook on back of earnings beat
Business

Thomson Reuters lifts sales outlook on back of earnings beat 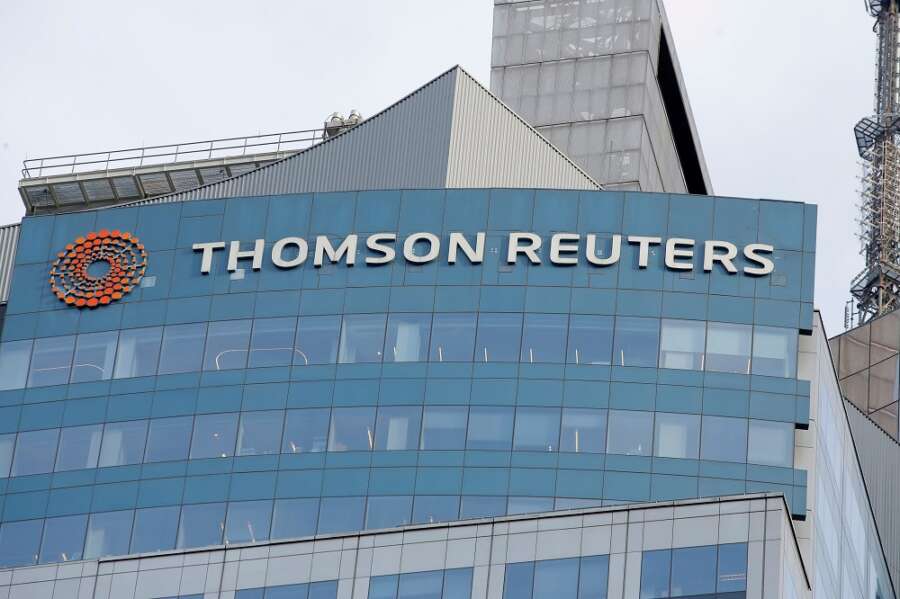 By Kenneth Li and Nick Zieminski

Underscoring its upbeat outlook, fueled by a recovering global economy, the global news and information company said on Thursday it would buy back up to $1.2 billion of its shares.

The company said it is monitoring whether the spread of the Delta variant of COVID-19 is affecting its businesses.

“We do not think that there is a significant financial impact for our customers, and therefore for us through the rest of this year,” Chief Executive Steve Hasker said, adding that the course of the pandemic was unpredictable.

The Thomson Reuters print and events businesses are among the areas most vulnerable in case of a worsening of the COVID-19 situation, Chief Financial Officer Michael Eastwood said.

Thomson Reuters, which is the parent company of Reuters News, said its total revenues rose 9% to $1.53 billion, compared to expectations of $1.5 billion.

Operating profit was down 14% to $316 million, reflecting one-time gains in the year-ago quarter.

All the divisions are expected to show higher sales in the third quarter, and total revenue for 2021 is now seen rising 4% to 4.5%, Thomson Reuters said, marking the second increase to sales guidance this year.

Thomson Reuters executives said in an interview after the results that it has spent $90 million of an estimated $500 million to $600 million investment as part of its Change program to shift from a portfolio company into an operating company.

The executives said $700 million remained of a $2 billion mergers and acquisitions budget and there was a “robust” pipeline of targets in the automation, small-to-medium sized cloud-based and software-as-services businesses, and companies that help improve customer experiences.

The London Stock Exchange Group in January closed a $27-billion deal data and analytics company Refinitiv that was part of Thomson Reuters until 2018. Thomson Reuters holds a minority stake in LSE which was worth $7.5 billion as of Aug. 4.