Our website publishes news, press releases, opinion and advertorials on various financial organizations, products and services which are commissioned from various Companies, Organizations, PR agencies, Bloggers etc. These commissioned articles are commercial in nature. This is not to be considered as financial advice and should be considered only for information purposes. It does not reflect the views or opinion of our website and is not to be considered an endorsement or a recommendation. We cannot guarantee the accuracy or applicability of any information provided with respect to your individual or personal circumstances. Please seek Professional advice from a qualified professional before making any financial decisions. We link to various third-party websites, affiliate sales networks, and to our advertising partners websites. When you view or click on certain links available on our articles, our partners may compensate us for displaying the content to you or make a purchase or fill a form. This will not incur any additional charges to you. To make things simpler for you to identity or distinguish advertised or sponsored articles or links, you may consider all articles or links hosted on our site as a commercial article placement. We will not be responsible for any loss you may suffer as a result of any omission or inaccuracy on the website.
Home Headlines Sterling slides below $1.15 for first time since 2020
Headlines 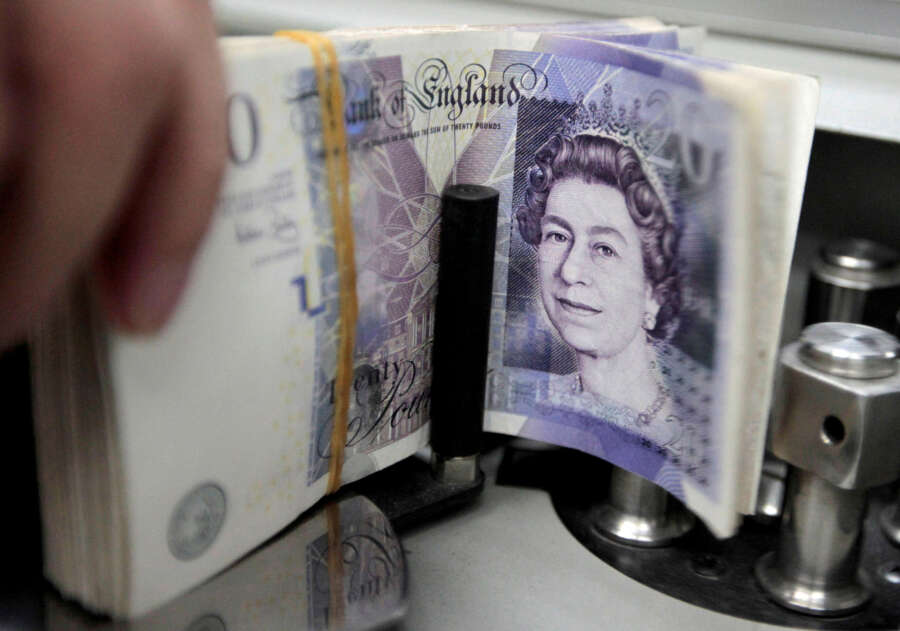 By Tom Wilson and Samuel Indyk

LONDON (Reuters) -Sterling skidded against the dollar on Thursday to its lowest level since March 2020 as storm clouds gathered over the British economy and investors seek safety in the U.S currency.

The pound lost 4.6% against the dollar last month in its worst performance since October 2016, and has fallen by nearly 15% this year, fuelled by concerns about slowing growth in the British economy as inflation soars into double digits

Its closing price on Wednesday was its weakest monthly close since 1985, when it hit an all-time low of around $1.05.

Currencies globally have been falling sharply against the dollar, with the euro also down heavily on Thursday, but analysts say a combination of inflationary pressures, economic weakness and uncertainty about the policies of the new prime minister – who is due to be announced on Monday – has made the pound particularly vulnerable.

British inflation hit 10% in July, its highest in 40 years, and is predicted to climb higher, squeezing the pay packages of hard-hit consumers further. British government bonds are suffering, too, enduring their biggest monthly fall since 1994.

“It seems like a bit of a perfect storm now for the pound,” said Viraj Patel, global macro strategist at Vanda Research.

“There’s also a Liz Truss risk premium starting to get priced in. Clearly the market is not responding well to some of the policies Truss has announced, especially the funding of the twin deficit in the UK,” London-based Patel added.

August was also sterling’s worst month against the euro since May 2021. On Thursday it recovered 0.4% to 86.19 pence per euro, after earlier hitting its lowest in two months.

The pound’s problems have been compounded by a strengthening dollar. The U.S. dollar index which measures the greenback against a basket of currencies, was last up 0.9% at 109.74. It earlier reached a new two-decade high of 109.99.

The greenback also hit a 24-year high against the Japanese yen earlier on Thursday, boosted by the ever widening gap between the yields on U.S. and Japanese government debt.

“It’s not just sterling weakness – it’s a dollar strength story,” said Michael Hewson, chief markets analyst at CMC Markets. “Sterling has its problems, but they are not unique to it – high inflation, surging energy prices and falling disposable incomes.”

Still, analysts are forecasting more pain for the pound, and some predict it will test its all-time low in the months ahead.