Our website publishes news, press releases, opinion and advertorials on various financial organizations, products and services which are commissioned from various Companies, Organizations, PR agencies, Bloggers etc. These commissioned articles are commercial in nature. This is not to be considered as financial advice and should be considered only for information purposes. It does not reflect the views or opinion of our website and is not to be considered an endorsement or a recommendation. We cannot guarantee the accuracy or applicability of any information provided with respect to your individual or personal circumstances. Please seek Professional advice from a qualified professional before making any financial decisions. We link to various third-party websites, affiliate sales networks, and to our advertising partners websites. When you view or click on certain links available on our articles, our partners may compensate us for displaying the content to you or make a purchase or fill a form. This will not incur any additional charges to you. To make things simpler for you to identity or distinguish advertised or sponsored articles or links, you may consider all articles or links hosted on our site as a commercial article placement. We will not be responsible for any loss you may suffer as a result of any omission or inaccuracy on the website.
Home Headlines Russia’s Gazprom tightens squeeze on gas flow to Europe
Headlines 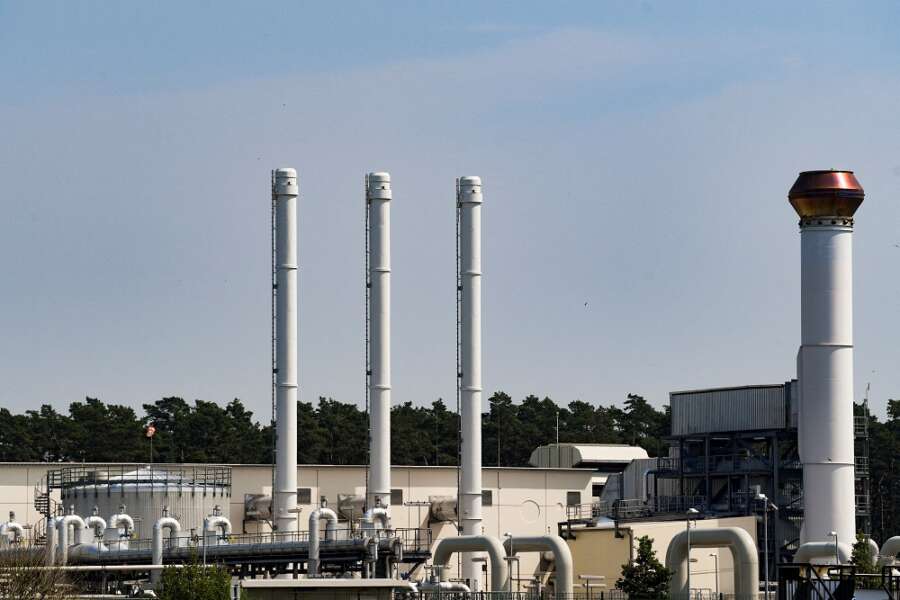 MOSCOW (Reuters) -Russia tightened its gas squeeze on Europe on Monday as Gazprom said supplies through the Nord Stream 1 pipeline to Germany would drop to just 20% of capacity.

Gazprom said flows would fall to 33 million cubic metres per day from 0400 GMT on Wednesday – a halving of the current, already reduced level – because it needed to halt the operation of a Siemens gas turbine at a compressor station on instructions from an industry watchdog.

Germany said it saw no technical reason for the latest reduction, which comes as Russia and the West exchange economic blows in response to what Moscow calls its special military operation in Ukraine.

The Dutch front-month gas contract, the European benchmark, closed 9.95% higher on news of the latest blow to Nord Stream 1. The pipeline, which has a capacity of 55 billion cubic metres a year, is the single biggest Russian gas link to Europe.

The European Union has repeatedly accused Russia of resorting to energy blackmail, while the Kremlin says the shortfalls have been caused by maintenance issues and the effect of Western sanctions.

Politicians in Europe have said Russia could cut off gas flows this winter, which would thrust Germany into recession and lead to soaring prices for consumers already grappling with higher prices for food and energy.

Germany was forced last week to announce a $15 billion bailout of Uniper, its biggest company importing gas from Russia.

Russia had already cut flows through Nord Stream 1 to 40% of capacity in June, citing the delayed return of a turbine that was being serviced by Siemens Energy in Canada – an explanation that Germany rejected as spurious.

It then shut Nord Stream 1 altogether for 10 days of annual maintenance this month, restarting it last Thursday still at 40% of normal levels.

The servicing of that first turbine is still a matter of dispute as it makes its way back to Russia through a tangle of paperwork and conflicting statements.

Gazprom said on Monday it had received documents from Siemens Energy and Canada but “they do not remove the previously identified risks and raise additional questions”.

It said there were also still questions over EU and UK sanctions, “the resolution of which is important for the delivery of the engine to Russia and the urgent overhaul of other gas turbine engines for the Portovaya compressor station.”

Siemens Energy said the transport of the serviced turbine to Russia could start immediately, and the ball was in Gazprom’s court.

“The German authorities provided Siemens Energy with all the necessary documents for the export of the turbine to Russia at the beginning of last week. Gazprom is aware of this,” it said.

“What is missing, however, are the customs documents for import to Russia. Gazprom, as the customer, is required to provide those.”

The German company said it saw no link between the turbine issue and the gas cuts implemented or announced by Gazprom. Gazprom did not immediately reply to a request for comment.

The Kremlin said earlier that Moscow was not interested in a complete stoppage of Russian gas supplies to Europe, which is straining to fill its underground storage before the peak demand winter season.

The disruption has raised the risk of gas rationing on the continent, with the European Union proposing to member states last week that they cut gas use by 15% between August and March compared with the same period of previous years.

Russia is the world’s second largest oil exporter after Saudi Arabia and the world’s largest exporter of natural gas. Europe imports about 40% of its gas and 30% of its oil from Russia.