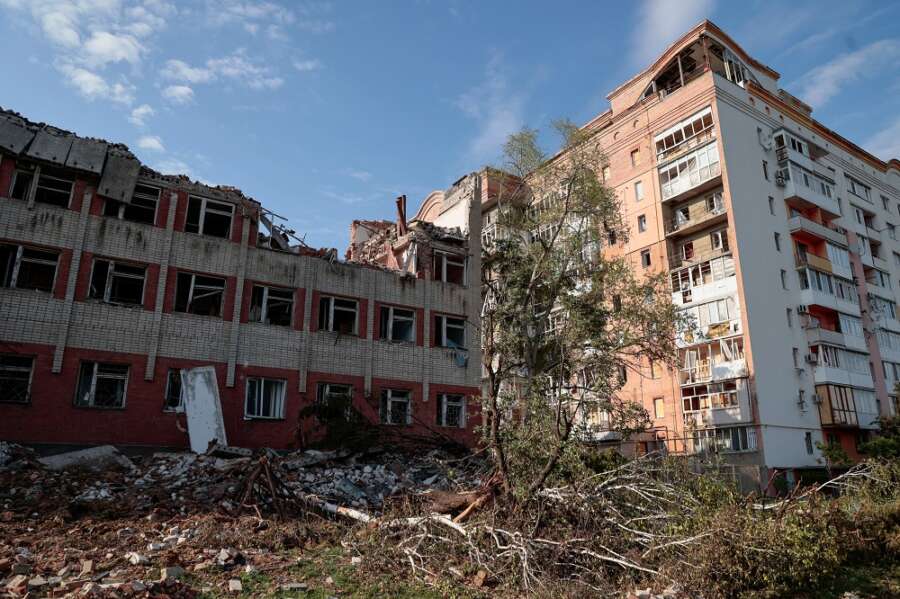 By Pavel Polityuk and Natalia Zinets

KYIV (Reuters) – Ukrainian and Russian forces battled on Monday on the outskirts of Sievierodonetsk, the last city still held by Kyiv in Ukraine’s Luhansk province and the focus of Moscow’s offensive in the country’s east.

Russian shelling has reduced much of the city to ruins but the Ukrainian defence has slowed the wider Russian campaign across the Donbas region.

“They use the same tactics over and over again. They shell for several hours – for three, four, five hours – in a row and then attack,” Gaidai said. “Those who attack die. Then shelling and attack follow again, and so on until they break through somewhere.”

He said that with temperatures rising, there was a “terrible smell of death” on the city outskirts.

But Ukrainian forces had driven the Russians out of the village of Toshkivka to the south, he said, potentially frustrating Moscow’s push to encircle the area.

As the battlefield struggle ground on, EU countries meeting in Brussels to discuss more sanctions on Moscow failed to agree on a ban of Russian oil imports, despite last-minute haggling before a summit.

The EU has rolled out five packages of sanctions against Russia since its troops invaded Ukraine on Feb. 24 but an agreement on oil sanctions has proved elusive because so many countries depend on Russian crude.

“There is no compromise for this moment at all,” said Hungarian Prime Minister Viktor Orban, whose country has been the main holdout for a deal.

Russian President Vladimir Putin meanwhile said that Moscow was ready to facilitate grain exports from Ukrainian ports – a possibility that could alleviate a food crisis as the war and the West’s attempt to isolate Russia have sent the price of grain and other commodities soaring.

After failing to capture the capital Kyiv in March, Russia said the focus of what it calls its “special military operation” was now to seize the entire Donbas region, consisting of two provinces, Luhansk and Donetsk, that Moscow claims on behalf of separatist proxies.

Russian Foreign Minister Sergei Lavrov said on Sunday the “liberation” of the Donbas was an “unconditional priority”.

Capturing Sievierodonetsk and its twin city Lysychansk on the opposite bank of the Siverskyi Donets river would give Russia effective control of Luhansk and would allow the Kremlin to declare some form of victory after more than three months of death and destruction.

But by focusing its effort on a battle for the single small city, Russia might be leaving other territory open to eventual Ukrainian counterstrikes.

The past few days have seen initial signs of a potential Ukrainian counter-offensive in the south, where Moscow is trying to consolidate its control of Kherson province.

Kyiv says its forces pushed back Russian troops in recent days to defensive positions in three villages – Andriyivka, Lozove and Bilohorka – all on the south bank of the Inhulets River that forms the border of Kherson.

A French journalist, Frederic Leclerc-Imhoff of television channel BFM, was killed near Sievierodonetsk on Monday when shelling hit the vehicle he was travelling in during an evacuation of civilians. French Foreign Minister Catherine Colonna, who was visiting Ukraine at the time, demanded an investigation.

PAYING WITH THEIR LIVES

As the EU leaders tried to thrash out agreement in Brussels, Latvian Prime Minister Krisjanis Karins told them they were forgetting the big picture.

“It’s only money. The Ukrainians are paying with their lives,” he said. “We can and we must support them, if only out of self-interest, because only when Russia is defeated can we in Europe feel safe.”

The failure to reach agreement has infuriated the Kyiv government and caused frustration among its biggest supporters within the EU. Ahead of the summit, German Economy Minister Robert Habeck expressed fears that EU unity was “starting to crumble”.

A draft of the summit conclusions showed that the leaders will agree in principle to an oil embargo but they will leave the practical details and hard decisions until later.

According to the text seen by Reuters – which could still be changed – the leaders would ban Russian oil first by sea and at some point later through pipelines. The package has been blocked by landlocked Hungary’s refusal to agree to a ban on imports of Russian oil, which it receives through the huge Soviet-era “Friendship” pipeline that runs across Ukraine.

There is broad agreement on the rest of the package, including cutting Russia’s biggest bank, Sberbank, from the SWIFT messaging system, banning Russian broadcasters from the EU, and adding people to a list whose assets are frozen.

Estonian Prime Minister Kaja Kallas said it was more realistic to expect an agreement on an oil embargo in a few weeks, hopefully at the EU’s next summit on June 23-24.

In the Netherlands, GasTerra, which buys and trades gas on behalf of the Dutch government, said it would no longer receive gas from Russia’s Gazprom from Tuesday after refusing to agree to Moscow’s demands for payment in roubles.

Western leaders have blamed Russia for holding the world to ransom by blockading Ukrainian ports and the United Nations, which says a global food crisis is deepening, is trying to broker a deal to unblock Ukraine’s grain exports.

Putin, in talks with Turkish President Tayyip Erdogan, said Russia was ready to facilitate the unhindered export of grain from Ukrainian ports in coordination with Turkey, the Kremlin said.

“Emphasis was placed on ensuring safe navigation in the Black and Azov seas and eliminating the mine threat in their waters,” the Kremlin said of Putin’s call with Erdogan.

Putin also said that if sanctions were lifted, then Russia could export significant volumes of fertilizers and agricultural products.

World stocks turn positive in May on Fed bets

How a cheap component could help kill off combustion cars