Russia promises to scale back Ukraine war but West sceptical 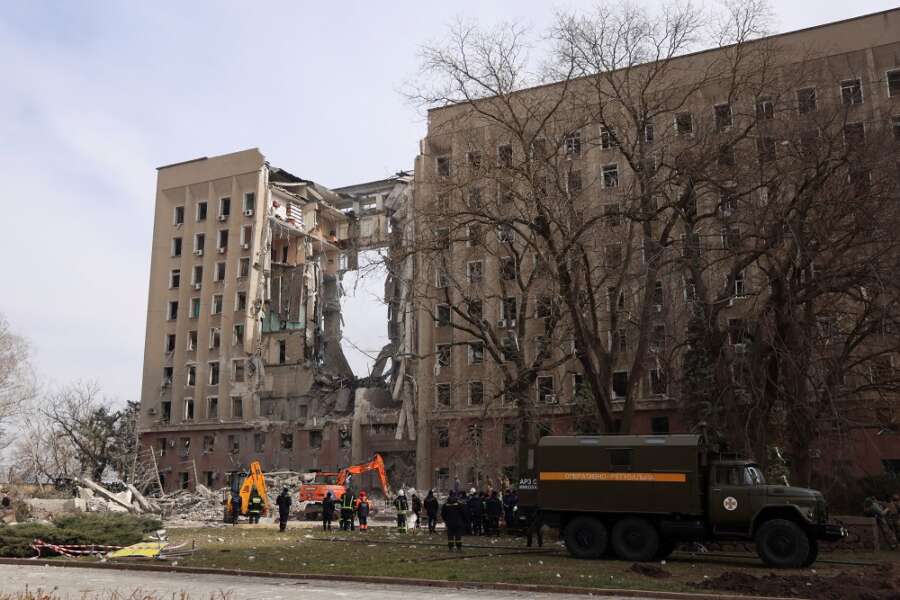 By Jonathan Spicer and Gleb Garanich

ISTANBUL/KYIV OUTSKIRTS/MARIUPOL, Ukraine (Reuters) – Russia promised on Tuesday to scale down military operations around Ukraine’s capital and north, while Kyiv proposed adopting neutral status, in confidence-building steps that were the first signs of progress towards negotiating peace.

Their talks took place in an Istanbul palace more than a month into the largest attack on a European nation since World War Two. Russia’s invasion has been halted on most fronts by stiff resistance from Ukrainian forces who have recaptured territory even as civilians are trapped in besieged cities.

Thousands of people have been killed or injured, nearly four million have fled Ukraine, and Russia’s economy has been pummelled by sanctions.

“In order to increase mutual trust and create the necessary conditions for further negotiations and achieving the ultimate goal of agreeing and signing (an) agreement, a decision was made to radically, by a large margin, reduce military activity in the Kyiv and Chernihiv directions,” Russian Deputy Defence Minister Alexander Fomin told reporters.

He made no mention of other areas that have seen heavy fighting, including around Mariupol in the southeast, Sumy and Kharkiv in the east and Kherson and Mykolaiv in the south.

Some analysts noted that Russia’s promise to reduce fighting mostly covered areas where it has been losing ground.

“We believe any movement of Russian forces from around Kyiv is a redeployment, not a withdrawal… They are shifting gears and probably because they failed with their initial offensive,” the official said.

Ukrainian negotiators said that under their proposals, Kyiv would agree not to join alliances or host bases of foreign troops, but would have security guaranteed in terms similar to “Article 5”, the collective defence clause of the transatlantic NATO military alliance.

They named Israel and NATO members Canada, Poland and Turkey as countries that may give such guarantees. Russia, the United States, Britain, Germany and Italy could also be involved.

The proposals, which would require a referendum in Ukraine, mentioned a 15-year consultation period on the status of Crimea, annexed by Russia in 2014. The fate of the southeastern Donbas region, which Russia demands Ukraine cede to separatists, would be discussed by the Ukrainian and Russian leaders.

To prepare a peace agreement, Medinsky later told the TASS news agency, “we still have a long way to go”.

The Ukrainian negotiators called for a meeting between Putin and President Volodymyr Zelenskiy. Medinsky said that could take place when foreign ministers were ready to initial an agreement.

“They agreed there could be no relaxation of western resolve until the horror inflicted on Ukraine has ended,” it said.

A source familiar with the situation told Reuters the allies discussed more financial aid of up to $500 million for Ukraine.

In Mariupol, besieged for weeks by Russian forces, nearly 5,000 people have been killed, according to figures from the mayor which cannot be verified.

One little girl played with a stick in ruins as explosions crackled in the distance. Two youths scavenged through rubble.

“We are eight people. We have two buckets of potatoes, one bucket of onions,” said Irina, an engineer, in her apartment where windows had been blasted out. Her group boiled soup on a makeshift stove in the stairwell.

Elsewhere, however, Ukrainian forces have made advances, recapturing territory from Russian troops on the outskirts of Kyiv, in the northeast, and in the south.

One recaptured area on a road towards the village of Rusaniv was littered with burnt-out tanks and bits of Russian uniforms. Surrounding houses were destroyed. A Ukrainian in uniform was digging a pit to bury charred remains of a Russian soldier.

In the southern city of Mykolaiv, a missile blasted a hole through the main administrative building. Authorities said at least 12 people were killed and 33 injured.

The Moscow-backed self-proclaimed Donetsk People’s Republic in eastern Ukraine may consider joining Russia once it controls all of Ukraine’s Donetsk region, its leader Denis Pushilin was quoted as saying on Tuesday.

Kyiv has said any such move would have no legal basis.

Russia calls its assault a “special operation” to disarm and “denazify” Ukraine. The West says it launched an unprovoked invasion.

Several European Union (EU) countries including Belgium, the Netherlands and Ireland on Tuesday expelled dozens of Russian diplomats, some for alleged spying, in what the Irish prime minister said was a coordinated move. Russia vowed retaliation.

(Reporting by Gleb Garaninch in the KYIV OUTSKIRTS, a Reuters journalist in MARIUPOL, Jonathan Spicer in ISTANBUL, Pavel Polityuk in LVIV, Steve Holland in Washington and Reuters bureaux; Writing by Peter Graff and Gareth Jones; Editing by Andrew Heavens and Andrew Cawthorne)

Russia promises to scale down operations in northern Ukraine

Romance fraud is on the rise: How can banks protect their customers?