Our website publishes news, press releases, opinion and advertorials on various financial organizations, products and services which are commissioned from various Companies, Organizations, PR agencies, Bloggers etc. These commissioned articles are commercial in nature. This is not to be considered as financial advice and should be considered only for information purposes. It does not reflect the views or opinion of our website and is not to be considered an endorsement or a recommendation. We cannot guarantee the accuracy or applicability of any information provided with respect to your individual or personal circumstances. Please seek Professional advice from a qualified professional before making any financial decisions. We link to various third-party websites, affiliate sales networks, and to our advertising partners websites. When you view or click on certain links available on our articles, our partners may compensate us for displaying the content to you or make a purchase or fill a form. This will not incur any additional charges to you. To make things simpler for you to identity or distinguish advertised or sponsored articles or links, you may consider all articles or links hosted on our site as a commercial article placement. We will not be responsible for any loss you may suffer as a result of any omission or inaccuracy on the website.
Home Headlines Rivian stock less bruised than Tesla as both miss EV targets
Headlines 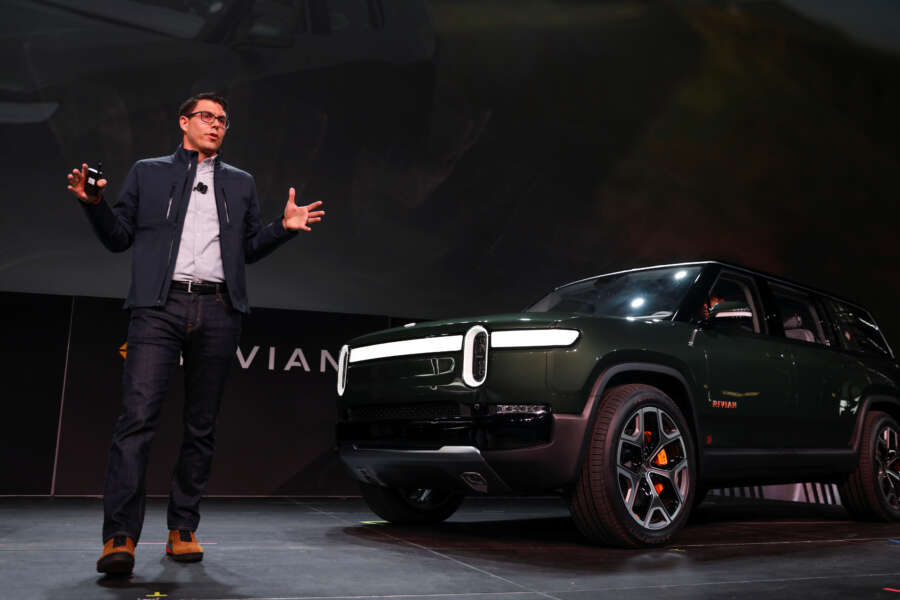 By Paul Lienert and Akash Sriram

Before the Securities and Exchange Commission released the filing, Rivian’s shares closed down nearly 6% to $17.34, but saw little movement in after-hours trade.

Rival Tesla, which also missed its production targets, had a rougher trading day, as its shares plunged more than 12% to $108.10, then limped along after hours.

The shortfall in expected production was the latest in a series of setbacks for the young company, which went public in November 2021.

Like other EV makers, supply-chain disruptions have pressured Rivian, which also shelved a plan in December to build delivery vans in Europe with Mercedes-Benz. Rivian earlier pushed back the production startup of its smaller R2 vehicle family to 2026 at the company’s planned $5 billion plant in Georgia.

In an email sent to employees on Tuesday, Chief Executive R.J. Scaringe said the company built 25,051 vehicles in Normal but counted only 24,337 as “factory gated” — that is, cleared for delivery to customers.

He described the final production tally as “an incredible achievement” while crediting “the commitment and passion of our entire team.” Scaringe cited supply-chain issues that closed the plant for 20 days and affected 50 other days, as well as bad weather that closed the factory five additional days.

Rivian’s stock has plummeted since it went public just 14 months ago. From a high of around $130 in early November 2021, the company’s shares closed Dec. 30 at $18.43 and continued to fall on Tuesday.

Rivian’s market value is now below $15 billion, from a high of well over $100 billion just after its IPO.

(Reporting by Paul Lienert in Detroit and Akash Sriram in Bengaluru; Editing by Lisa Shumaker)