Our website publishes news, press releases, opinion and advertorials on various financial organizations, products and services which are commissioned from various Companies, Organizations, PR agencies, Bloggers etc. These commissioned articles are commercial in nature. This is not to be considered as financial advice and should be considered only for information purposes. It does not reflect the views or opinion of our website and is not to be considered an endorsement or a recommendation. We cannot guarantee the accuracy or applicability of any information provided with respect to your individual or personal circumstances. Please seek Professional advice from a qualified professional before making any financial decisions. We link to various third-party websites, affiliate sales networks, and to our advertising partners websites. When you view or click on certain links available on our articles, our partners may compensate us for displaying the content to you or make a purchase or fill a form. This will not incur any additional charges to you. To make things simpler for you to identity or distinguish advertised or sponsored articles or links, you may consider all articles or links hosted on our site as a commercial article placement. We will not be responsible for any loss you may suffer as a result of any omission or inaccuracy on the website.
Home Headlines Rate fever propels dollar, wallops stocks and bonds
Headlines 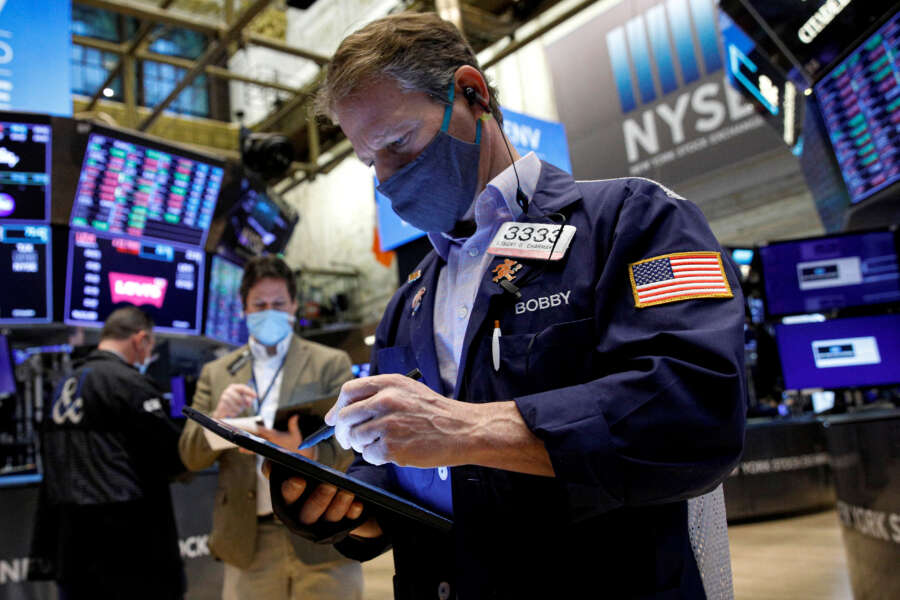 Federal Reserve Chair Jerome Powell said at the Jackson Hole symposium on Friday the Fed would raise rates as high as needed to restrict growth, and keep them there “for some time” to bring down inflation running well above its 2% target.

European Central Bank board member Isabel Schnabel added to market unease. She warned on Saturday that central banks risk losing public trust and must act forcefully to curb inflation, even if that drags their economies into a recession.

Investors waking up to the reality that rates would remain high even as recession risk grows sold off risky assets.

The S&P 500 index fell 0.66% to its lowest in a month after a day of choppy trade. The Dow Jones Industrial Average lost 0.6%, and the Nasdaq Composite dropped 1%.

European stocks fell 0.8% to their lowest in over five weeks, and Japan’s blue-chip Nikkei slid 2.7%.

London markets were closed for a holiday, while MSCI’s world equity index fell 1% to a one-month low.

“The message from Jackson Hole was loud and clear and not what markets were expecting,” said Nordea chief analyst Jan von Gerich.

“Central banks need convincing evidence that inflation is coming down. That is bad news for the economy and risk appetite and raises the risk of a deeper recession if we get more rapid rate hikes.”

Investors ramped up U.S. and euro zone rate hike bets, with markets pricing in a greater chance of 75 basis point hikes from the Fed and ECB in September.

“Markets are focusing on discussing the message of ‘coordinated tightening’ from Jackson Hole as ECB and Fed appear to have re-committed to creating price stability: yields are shooting higher and risk assets are quite a bit lower since last week,” said Lars Sparreso Lykke Merklin, senior analyst at Danske Bank.

Much might depend on what U.S. August payrolls figures show this Friday. Analysts are looking for a moderate rise of 285,000 following July’s blockbuster 528,000 gain.

As investors hunkered down for front-loaded rate hikes, key gauges of equity market volatility shot up.

“Chair Powell and the Fed make it crystal clear that their job fighting inflation remains unfinished,” researchers at Morgan Stanley said in a note to clients. “The path for stocks from here will be determined by earnings, where we still see material downside.”

This all benefited the safe-haven dollar, which briefly shot to a fresh two-decade peak at 109.48 against a basket of major currencies.

The Dutch September gas delivery contract dropped as much as 11% as Germany’s economy minister said he expected prices to fall soon as Germany is making progress on its storage targets, with facilities nearly 83% full and set to hit its 85% Oct. 1 goal in early September.

“I struggle to understand the sense of sharp (ECB) interest rate hikes. The big problem is energy supply, and right now it doesn’t look we can get out any time soon,” said Carlo Franchini, head of institutional clients at Banca Ifigest in Milan.

“Such a sharp rise in such a complicated economic picture will put companies and households in a very difficult situation. Trading volumes are really thin. I think it would be worth sell into any rally even though the word rally doesn’t seem appropriate.”

The rise of the dollar and yields has depressed gold, which was last flat at $1,737.45 an ounce.