Our website publishes news, press releases, opinion and advertorials on various financial organizations, products and services which are commissioned from various Companies, Organizations, PR agencies, Bloggers etc. These commissioned articles are commercial in nature. This is not to be considered as financial advice and should be considered only for information purposes. It does not reflect the views or opinion of our website and is not to be considered an endorsement or a recommendation. We cannot guarantee the accuracy or applicability of any information provided with respect to your individual or personal circumstances. Please seek Professional advice from a qualified professional before making any financial decisions. We link to various third-party websites, affiliate sales networks, and to our advertising partners websites. When you view or click on certain links available on our articles, our partners may compensate us for displaying the content to you or make a purchase or fill a form. This will not incur any additional charges to you. To make things simpler for you to identity or distinguish advertised or sponsored articles or links, you may consider all articles or links hosted on our site as a commercial article placement. We will not be responsible for any loss you may suffer as a result of any omission or inaccuracy on the website.
Home Headlines Pizza firm DP Eurasia considers divestment of Russian business
Headlines 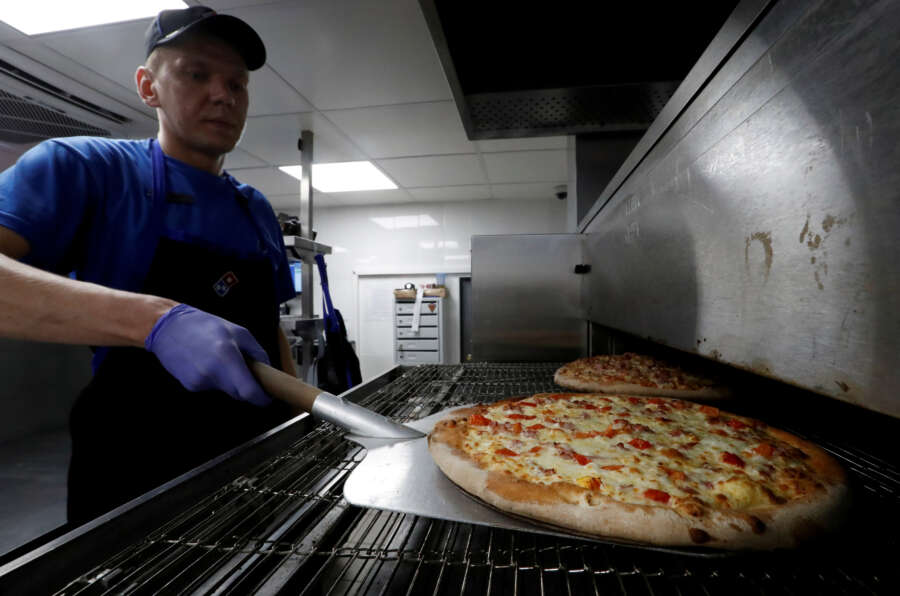 (Reuters) -DP Eurasia, which runs the Domino’s Pizza brand in Turkey and Russia, said on Wednesday it was considering options for its Russian operations, including a divestment.

It added the work on a potential transaction was ongoing and there could be no certainty as to the outcome.

“DP Eurasia is evaluating its presence in Russia, the impact of sanctions and its continuing ability to serve its customers in Russia,” it said, responding to market speculation regarding an exit from its Russian operations.

“Consequently, the company is considering various options which may include a divestment of its Russian operations,” it said.

While many Western companies exited Russia after Moscow’s invasion of Ukraine began on Feb. 24, DP Eurasia said in April it planned to stay, but would limit investment there.

The London-listed company said in October it would keep optimising its store count in Russia and that it had 171 stores in the country at the end of October, compared to 192 a year earlier.

Slipping over Mexico border, migrants get the jump on U.S. court ruling