Our website publishes news, press releases, opinion and advertorials on various financial organizations, products and services which are commissioned from various Companies, Organizations, PR agencies, Bloggers etc. These commissioned articles are commercial in nature. This is not to be considered as financial advice and should be considered only for information purposes. It does not reflect the views or opinion of our website and is not to be considered an endorsement or a recommendation. We cannot guarantee the accuracy or applicability of any information provided with respect to your individual or personal circumstances. Please seek Professional advice from a qualified professional before making any financial decisions. We link to various third-party websites, affiliate sales networks, and to our advertising partners websites. When you view or click on certain links available on our articles, our partners may compensate us for displaying the content to you or make a purchase or fill a form. This will not incur any additional charges to you. To make things simpler for you to identity or distinguish advertised or sponsored articles or links, you may consider all articles or links hosted on our site as a commercial article placement. We will not be responsible for any loss you may suffer as a result of any omission or inaccuracy on the website.
Home Headlines Nobel physics prize goes to sleuths of ‘spooky’ quantum science
Headlines 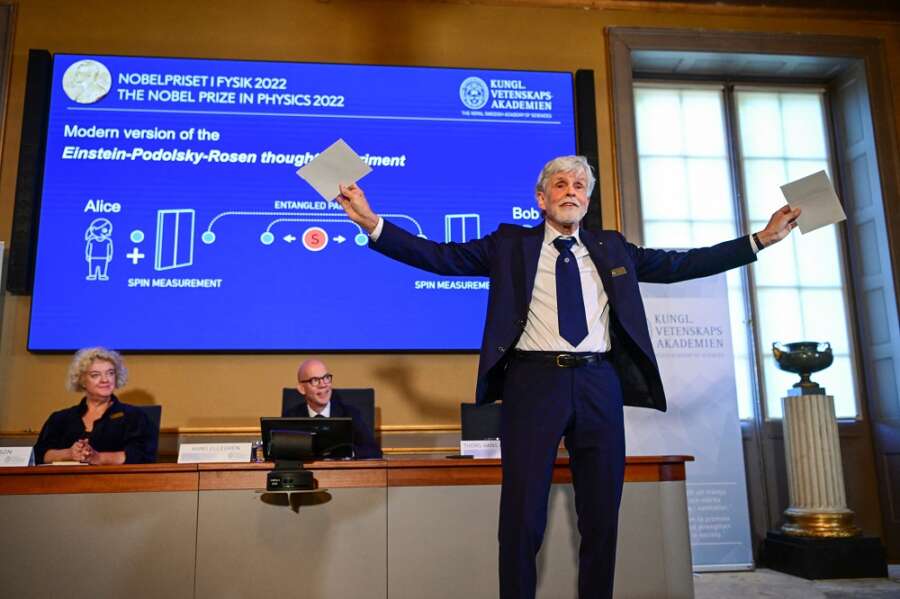 STOCKHOLM (Reuters) -Scientists Alain Aspect, John Clauser and Anton Zeilinger won the 2022 Nobel Prize in Physics for experiments in quantum mechanics that laid the groundwork for rapidly-developing new applications in computing and cryptography.

“Their results have cleared the way for new technology based upon quantum information,” the Royal Swedish Academy of Sciences said of the laureates — Aspect, who is French, Clauser, an American and Zeilinger, an Austrian.

The scientists all conducted experiments into quantum entanglement, where two particles are linked regardless of the space between them, a field that unsettled Albert Einstein himself, who once referred to it in a letter as “spooky action at a distance”.

“I’m very happy … I first started this work back in 1969 and I’m happy to still be alive to be able get the prize,” Clauser, 79, told Reuters by phone from his home in Walnut Creek, California.

He said he had witnessed his initial work snowball into much larger experiments. China’s Micius satellite, part of a quantum physics research project, was constructed in part on his findings, he said.

“The configuration of the satellite and the ground station is almost identical to my original experiment. Mine was about 30 feet long, theirs is thousands of kilometers for quantum communication.”

Asked to explain his work in layman’s terms, he joked he does not understand it himself but added that the interactions it describes permeate almost everything.

“Probably every particle in the universe is entangled with every other particle,” Clauser said, chuckling.

French President Emmanuel Macron tweeted his congratulations to the winners, adding “Einstein himself did not believe in quantum entanglement! Today, the promises of quantum computing are based on this phenomenon.”

Zeilinger, 77, told a press conference by phone after hearing the news that he was “shocked, but very positive.”

He said in an interview this year after being awarded an honorary doctorate that protected quantum communication over potentially thousands of kilometres via cables or satellite would soon be on the cards.

“It is quite clear that in the near future we will have quantum communication all over the world,” he said at the time.

Quantum physics is the study of matter and energy at a subatomic level involving the smallest building blocks of nature.

In background material explaining the prize, the academy said the laureates’ work involves “the mind-boggling insight that quantum mechanics allows a single quantum system to be divided up into parts that are separated from each other but which still act as a single unit.”

“This goes against all the usual ideas about cause and effect and the nature of reality.”

“Even though the … experimental techniques that these folks pioneered might not directly applicable, they’re laying the ground work for using quantum entanglement as a technological resource,” he told Reuters.

The laureates explored in ground-breaking experiments how two or more photons, or particles of light, that are “entangled” because they come from the same laser beam, interact even when they are separated far apart from each other.

The more than century-old prize, worth 10 million Swedish crowns ($902,315), is awarded by the Royal Swedish Academy of Sciences. Physics is the second Nobel to be awarded this week after Swedish geneticist Svante Paabo won the prize for Physiology or Medicine on Monday.

The physics prize has often taken centre stage among the awards, featuring household names of science such as Albert Einstein, Max Planck, Pierre Curie and Marie Curie, and rewarding breakthroughs that have reshaped how we see the world.