Home Wealth Creation Low capital calls set to insulate LBO funds from downturn
Our website publishes news, press releases, opinion and advertorials on various financial organizations, products and services which are commissioned from various Companies, Organizations, PR agencies, Bloggers etc. These commissioned articles are commercial in nature. This is not to be considered as financial advice and should be considered only for information purposes. It does not reflect the views or opinion of our website and is not to be considered an endorsement or a recommendation. We cannot guarantee the accuracy or applicability of any information provided with respect to your individual or personal circumstances. Please seek Professional advice from a qualified professional before making any financial decisions. We link to various third-party websites, affiliate sales networks, and to our advertising partners websites. When you view or click on certain links available on our articles, our partners may compensate us for displaying the content to you or make a purchase or fill a form. This will not incur any additional charges to you. To make things simpler for you to identity or distinguish advertised or sponsored articles or links, you may consider all articles or links hosted on our site as a commercial article placement. We will not be responsible for any loss you may suffer as a result of any omission or inaccuracy on the website.
Wealth Creation 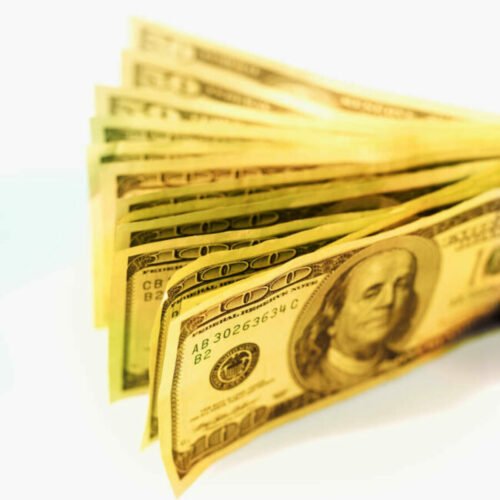 eFront’s latest research finds that recent historically low levels of capital calls from LBO funds could protect them as markets fall into recession
eFront, the leading financial software and solutions provider dedicated to Alternative Investments, has published its latest research on LBO and VC performance during crises: “Private Markets in Downturns: 3 Observations”.
Key findings:
Analysis
Our previous research provides evidence for private equity fund performance being significantly positively correlated with public equities. It reports the coefficient of correlation between US buyout market quarterly returns with S&P 500 of 0.64 for the period between 1992 and 2018 (Figure 1).
Private equity NAVs under-react to the evolution of market indexes of listed assets, both in terms of downside and during the subsequent recovery periods, for a number of reasons. First, the composition of the indexes and the portfolio of funds differs significantly. Second, fund managers tend to react faster, thanks to advanced and early KPIs, but also strong governance frameworks and through supporting portfolio companies during downturns. Third, listed markets tend to over-react to events and downturns, before reverting to the average.
Figure 1: Historical quarterly returns of S&P500 and the NAV of US LBO funds 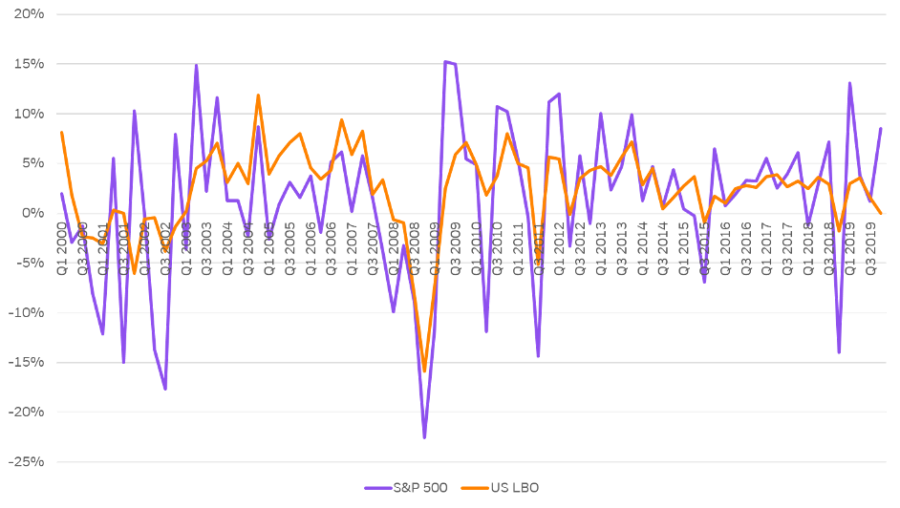 A close look at the private market returns shows that US and European LBO funds exhibited strong resilience in the early 2000s, with US LBO market declining by less than 13%. Figure 2 illustrates the under-reaction of the US and European NAVs relative to the evolution of public indexes during the global financial crisis. The S&P 500 suffered a quarterly drop of 23% in Q4 2008, followed by another massive loss in value in the subsequent quarter. However, LBO funds showed more stable evolution by recording lower losses during those quarters, but also by exhibiting relatively lower recovery rates during Q2 and Q3 in 2009, relative to S&P 500.
Figure 2: Quarterly evolution of major indexes and NAVS of US and LBO funds during GFR

The European private equity market showed more volatility than US funds, as its LBO funds experienced an actual NAV appreciation in Q3 2008 but corrected sharply in the next quarter. The correlation between FTSE 100 and the LBO market was at the very low level of 0.16. Overall, this gives a more positive hue for private equity funds as economies globally enter potentially very deep recessions.
A second factor that could significantly insulate LBO funds from the wider economic malaise is the dynamics of capital calls and distributions in recent years. In the run up to the global financial crisis, capital calls spiked, reaching well over 15% of total fund size in both the US and European buyout markets in 2006-07, indicating that funds were putting enormous sums of capital to work at the very peak of the market.
This time, the pattern is very different, with capital calls falling below 5% in both markets in 2018-19. This may indicate that funds of recent vintage years have not been rushing to deploy capital early in a highly priced market, potentially limiting the damage caused to portfolios and also meaning that investors have large pools of dry powder available to make new acquisitions.
Figure 3 shows the annual capital calls and distributions of US LBO funds. Towards the end of the downturns, LBO fund managers started snapping up good investment opportunities in difficult times, at attractive valuations, which gave an impulse to increase drawdowns.
Figure 3: Annual calls and distributions of US LBO funds 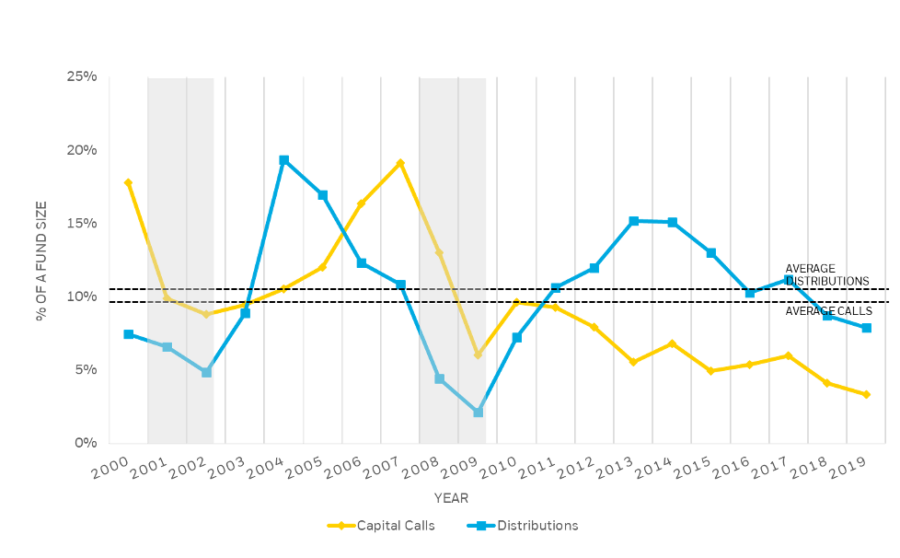 Figure 4 shows the annual capital calls and distributions of European LBO funds. The upward recovery trend over the years that followed both recessions in the LBO markets can be attributed to expansionary macro policies that were enacted in both US and European countries. Low interest rates gave rise to increasing company valuations and a stronger exit environment.
Figure 4: Annual calls and distributions of European LBO funds 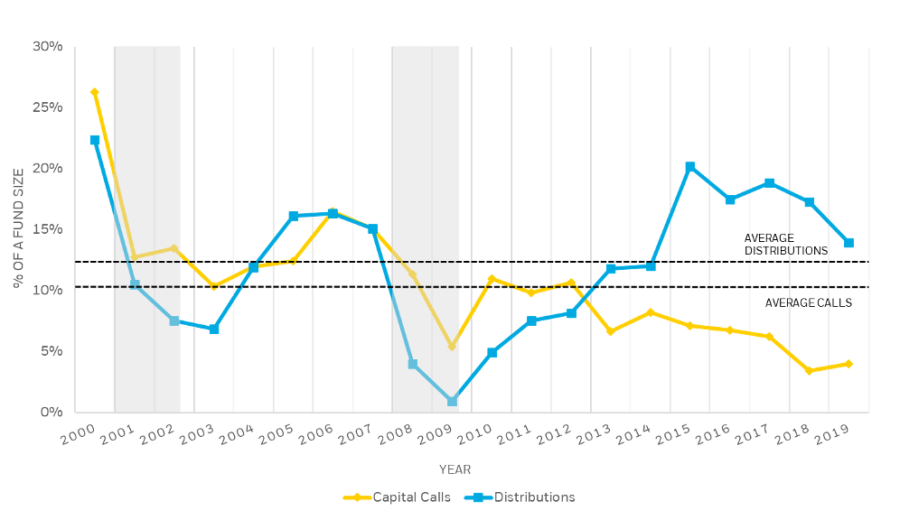 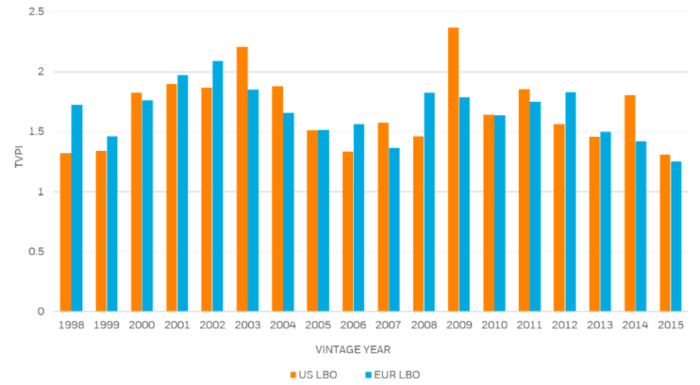 Given the unambiguous nature of this downturn, driven by deliberate economic shutdowns, it may be that GP write-downs this June and September will be more decisive than in other downturns. On the other hand, a different industry composition, more inclined toward pharmaceutical and IT companies may be a cause for private market under-reaction. Unlike the previous two downturns, however, private market managers had been radically reducing their deployment of capital in the run up to this recession, while raising unprecedented amounts of capital. Whether this was a result of luck, judgement or intuition, the industry appears exceptionally well placed to invest into any recovery. History suggests that those who start do so quickly, will reap the most benefit.