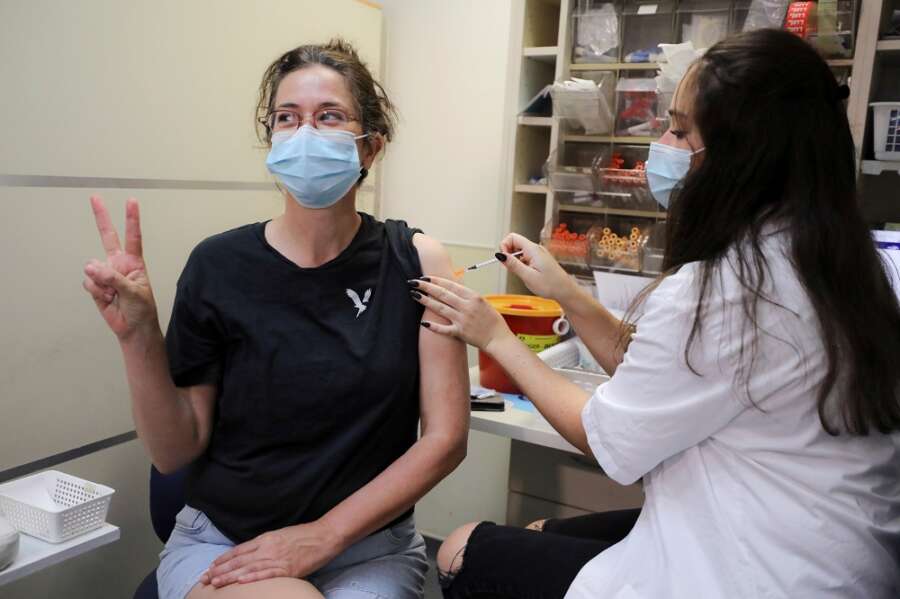 JERUSALEM (Reuters) -Less than a month into a COVID-19 vaccine booster drive, Israel is seeing signs of an impact on the country’s high infection and severe illness rates fuelled by the fast-spreading Delta variant, officials and scientists say.

Delta hit Israel in June, just as the country began to reap the benefits of one of the world’s fastest vaccine roll-outs.

With an open economy and most curbs scrapped, Israel went from single-digit daily infections and zero deaths to around 7,500 daily cases last week, 600 people hospitalized in serious condition and more than 150 people dying in that week alone.

On July 30, it began administering a third dose of the Pfizer/BioNtech vaccine to people over 60, the first country to do so. On Thursday it expanded eligibility to 30-year-olds and up whose second dose was given at least 5 months prior, saying the age may drop further.

In the past 10 days, the pandemic is abating among the first age group, more than a million of whom have received a third vaccine dose, according to Israeli health ministry data and scientists interviewed by Reuters.

The rate of disease spread among vaccinated people age 60 and over – known as the reproduction rate – began falling steadily around Aug. 13 and has dipped below 1, indicating that each infected person is transmitting the virus to fewer than one other person. A reproduction rate of less than 1 means an outbreak is subsiding. https://tmsnrt.rs/3grj7kv

Scientists said booster shots are having an impact on infections, but other factors are likely contributing to the decline as well.

“The numbers are still very high but what has changed is that the very high increase in the rate of infections and severe cases has diminished, as has the pace at which the pandemic is spreading,” said Eran Segal, data scientist at the Weizmann Institute of Science and an adviser to the government.

“This is likely due to the third booster shots, an uptake in people taking the first dose and the high number of people infected per week, possibly up to 100,000, who now have natural immunity,” Segal said.

After reaching one of the highest per-capita infection rates in the world this month, the question now is whether Israel can battle its way out of a fourth outbreak without imposing another lockdown that would damage its economy.

Evidence has emerged showing that while the vaccine is still highly effective in preventing serious illness, its protection diminishes with time. But there is no consensus among scientists and agencies that a third dose is necessary, and the World Health Organization has said more of the world should be vaccinated with a first dose before people receive a third dose.

About a million of Israel’s 9.3 million population have so far chosen not to vaccinate at all and children under 12 are still not eligible for the shots. On Thursday, health officials said they have identified waning immunity among people under 40, although relatively few have fallen seriously ill.

According to Doron Gazit, a member of the Hebrew University’s COVID-19 expert team which advises government, the rise in cases of severely ill vaccinated people in the 60 and older group has been steadily slowing to a halt in the last 10 days.

“We attribute this to the booster shots and to more cautious behaviour recently,” Gazit said.

More than half of those over 60 have received a third jab, according to the Health ministry.

The rate of new severe cases among unvaccinated patients 70 and older is now seven times that of vaccinated patients, and the gap will continue to grow as long as infections rise, according to Gazit. Among those over 50, that gap is four-fold.

“We are optimistic, but very cautious,” Israeli Health Minister Nitzan Horowitz told public broadcaster Kan on Sunday. “It gives us more time, slows the spread and we’re moving away from lockdown.”

But even if the boosters are slowing the pandemic’s pace, it is unlikely to fend Delta off entirely.

Dvir Aran, biomedical data scientist at Technion – Israel’s Institute of Technology, said that while cases are retreating, other measures are needed alongside boosters to stop the pandemic. “It will take a long time until enough people get a third dose and until then thousands more people will getting seriously ill.”

Its “living with COVID” policy will be tested come September, when schools reopen after summer break and when the Jewish holiday season starts, with families traditionally gathering to celebrate.