Home Headlines In troubled France, no honeymoon for re-elected Macron
Our website publishes news, press releases, opinion and advertorials on various financial organizations, products and services which are commissioned from various Companies, Organizations, PR agencies, Bloggers etc. These commissioned articles are commercial in nature. This is not to be considered as financial advice and should be considered only for information purposes. It does not reflect the views or opinion of our website and is not to be considered an endorsement or a recommendation. We cannot guarantee the accuracy or applicability of any information provided with respect to your individual or personal circumstances. Please seek Professional advice from a qualified professional before making any financial decisions. We link to various third-party websites, affiliate sales networks, and to our advertising partners websites. When you view or click on certain links available on our articles, our partners may compensate us for displaying the content to you or make a purchase or fill a form. This will not incur any additional charges to you. To make things simpler for you to identity or distinguish advertised or sponsored articles or links, you may consider all articles or links hosted on our site as a commercial article placement. We will not be responsible for any loss you may suffer as a result of any omission or inaccuracy on the website.
Headlines

In troubled France, no honeymoon for re-elected Macron 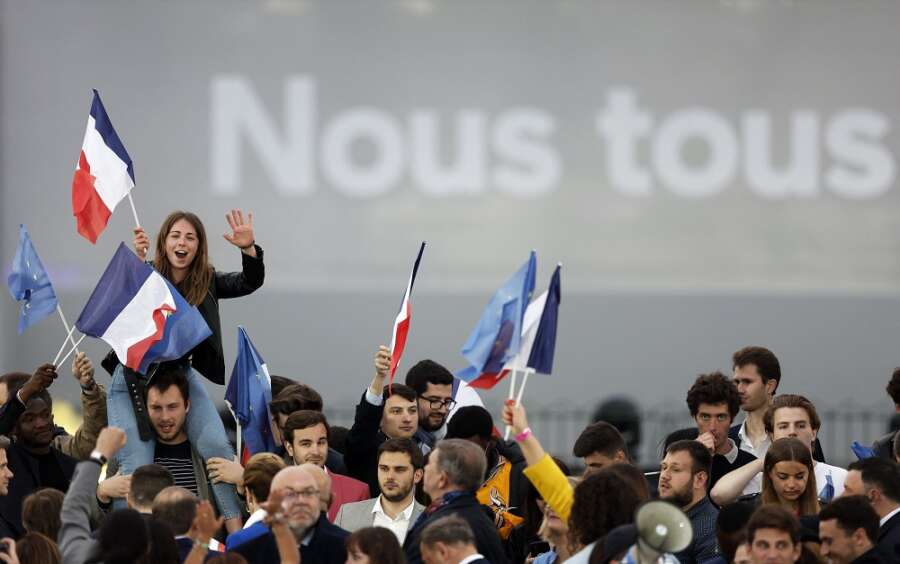 Emmanuel Macron may have seen off far-right leader Marine Le Pen, but his second term could be even rockier than the first with mounting political opposition and boiling social discontent.

As his supporters savoured a hard-earned re-election at a rally by the Eiffel Tower on Sunday, Macron acknowledged in his victory speech that many people who voted for him did so to block Le Pen and not because they support his ideas.

“No one will be left by the wayside,” Macron said, flanked by his wife Brigitte.

“This next era will not be the same as the last mandate, we will invent a new way of doing things together, for a better five years.”

The next hurdle is only a few weeks ahead. Parliamentary elections in June will define the make-up of the government Macron must rely on to see through reform plans that would be an unprecedented shake-up of France’s welfare state.

Newly elected presidents can usually expect to get a majority in parliament whenever legislative elections directly follow the presidential vote because of the generally low turnout among supporters of all the defeated candidates.

However, in her concession speech, Le Pen sounded defiant, promising a strong opposition bloc in parliament. While hard-left Jean-Luc Melenchon has his mind set on becoming prime minister after securing the bulk of the left-wing vote in the first round.

Melenchon hopes to carry that momentum into the parliamentary elections and force Macron into an awkward and stalemate-prone “cohabitation” with him in charge of a left-wing majority.

Even if Macron allies do get a majority or a workable coalition pact, he will also have to deal with resistance in the streets to his reform plans, notably a pension reform that would gradually raise the minimum age to 65 from 62.

Pensions are always a hot issue in France and Macron’s lower score against Le Pen compared to 2017 means he won’t have the same authority to implement reforms he had five years ago, despite becoming the only French president to be re-elected in two decades.

“His election is a choice by default. He risks being a lame duck faced with major social discontent if he wants to implement sensitive reforms such as for pensions,” Christopher Dembik, an economist for Saxo Bank, told Reuters.

In a possible sign of the trouble ahead, he was repeatedly admonished by angry voters about the pension reform on the campaign trail, forcing him to concede a possible cap at 64.

Philippe Martinez, the head of the Communist-backed CGT union, one of the biggest in France, has already warned Macron that there would be “no honeymoon” for him and he could expect demonstrations if he did not back down entirely.

Another volatile issue to deal with in the immediate aftermath of the election will be skyrocketing energy prices.

Macron’s government has capped electricity prices and offered discounts on prices at the pump until after the election. He said during the campaign he would shield voters for as long as necessary, but offered no timeline.

What is clear is that the costly measures will have to be lifted at some point. Meanwhile, lawmakers say constituents are already complaining about the soaring price of all sorts of staples, such as Ukraine-made sunflower oil or rice and bread.

In 2018, rising pump prices triggered France’s worst social unrest since the 1968 students revolt with the “yellow vest” rebellion that caused months of disruption in Paris and roundabouts across France.

Macron will therefore have to tread carefully if he doesn’t want the tinderbox to explode again.

His first term has been littered with PR gaffes that made him come across as arrogant or patronising. Many French detest him: one man on the campaign trail told him to his face he was “the worst president of the Fifth Republic.”

Political allies warn he will need to consult lawmakers, unions and civil society more and do away with the top-down governing style of his first term which he himself loftily described as “Jupiterian”.

“Emmanuel Macron got the message: You can’t decide about everything from on high, he’s not the head of a company,” lawmaker Patrick Vignal told Reuters. “He needs to accept this idea of negotiation, consultation.”

Will joining the Great Resignation to start your own business bring happiness?

Explainer-Why is Bank of England acting again? What...

What is known so far about the Nord...

Bank of England statement on purchase of long-dated...