Our website publishes news, press releases, opinion and advertorials on various financial organizations, products and services which are commissioned from various Companies, Organizations, PR agencies, Bloggers etc. These commissioned articles are commercial in nature. This is not to be considered as financial advice and should be considered only for information purposes. It does not reflect the views or opinion of our website and is not to be considered an endorsement or a recommendation. We cannot guarantee the accuracy or applicability of any information provided with respect to your individual or personal circumstances. Please seek Professional advice from a qualified professional before making any financial decisions. We link to various third-party websites, affiliate sales networks, and to our advertising partners websites. When you view or click on certain links available on our articles, our partners may compensate us for displaying the content to you or make a purchase or fill a form. This will not incur any additional charges to you. To make things simpler for you to identity or distinguish advertised or sponsored articles or links, you may consider all articles or links hosted on our site as a commercial article placement. We will not be responsible for any loss you may suffer as a result of any omission or inaccuracy on the website.
Home Headlines How 2022 shocked, rocked and rolled global markets
Headlines 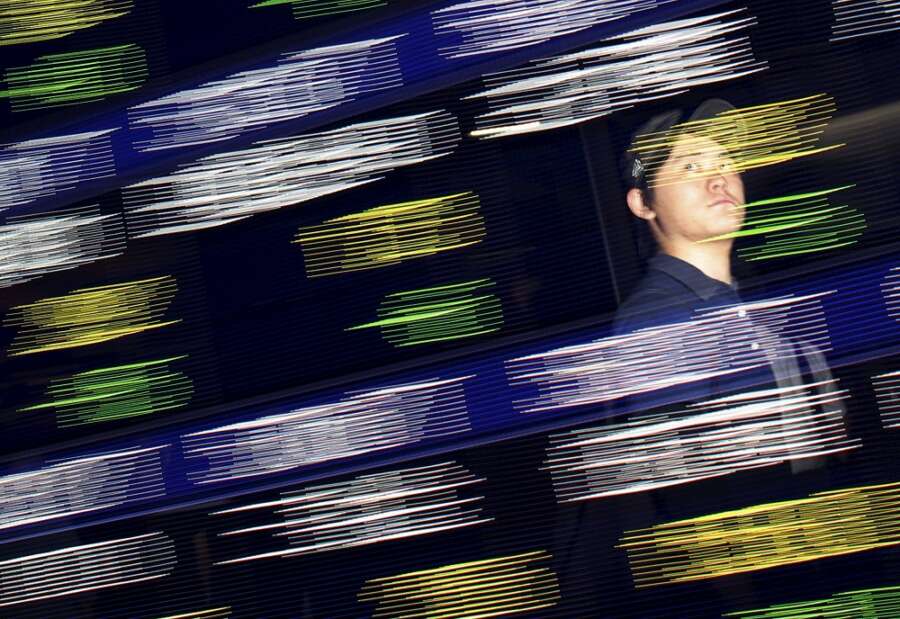 LONDON (Reuters) – Trillions of dollars wiped off world stocks, bond market tantrums, whip-sawing currency and commodities and the collapse of a few crypto empires – 2022 has been perhaps the most turbulent year investors have ever seen, and for good reason.

Tallying the final numbers is useful but doesn’t even come close to telling the whole story.

Yes, global equities are down $14 trillion and heading for their second worst year on record, but there have been nearly 300 interest rate hikes and a trio of 10%-plus rallies in that time making the volatility freakish.

The main drivers have been the war in Ukraine, combined with rampant inflation as global economies broke out of the pandemic, but China remained shackled by it.

DoubleLine Capital’s Jeffery Gundlach, dubbed the ‘Bond King’ in the markets, says conditions got so ugly at points that his team found it almost impossible to trade for days at a time.

“There has been a buyer’s strike,” he said. “And understandably so because prices have just been going down until recently.”

Drama kicked in as soon as it became clear that COVID was not going to shutter the global economy again and the world’s most influential central bank, the U.S. Federal Reserve, was serious about raising interest rates.

That yield is now at 3.68%, stocks are down 20% while oil prices surged 80% before giving it all up. The Fed has delivered 400bps of hikes and the European Central Bank a record 250bps, despite saying this time last year it was unlikely to budge.

The dollar has risen almost 9% against the main world currencies, and 12.5% against the Japanese yen even after a last minute Bank of Japan surprise this week gave the yen a lift.

In emerging markets, Turkey’s inflation and monetary policy problems have cost the lira another 28%, but its stock market is the best performer in the world.

Hard-pressed Egypt devalued its currency more than 36%. Ghana’s cedi crashed 60% as it has joined Sri Lanka in default. Despite being well down from its June highs, Russia’s rouble is still the world’s second-best performing currency supported by Moscow’s capital controls. It was initially smashed after the invasion of Ukraine. 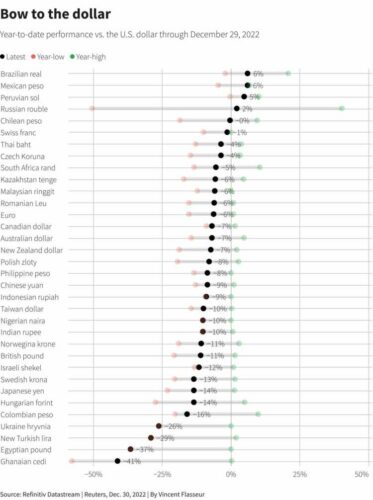 “If you ask me what will happen next year I really couldn’t tell you,” said Close Brothers Asset Management’s Chief Investment Officer Robert Alster, who, like many, also pointed to the pummeling the pound and British bond markets took when the short-lived government of Liz Truss flirted with an unfunded spending splurge.

Ten-year gilt yields soared over 100 bps and the pound lost 9% in a matter of days – moves the scale of which are rare in major markets.

“If you sell it wrong, don’t be surprised if it goes down like a cup of cold sick,” said veteran CMC Markets’ analyst Michael Hewson.

The surge in rates has also taken $3.6 trillion off the tech titans. Facebook and Tesla have both hemorrhaged more than 60% while Alphabet’s Google and Amazon are respectively down 40% and 50%.

Chinese stocks have staged a late rally thanks to signs that its zero-COVID policy’s days are numbered but they are still down 25% and emerging market ‘hard currency’ government debt will notch its first ever back-to-back loss. 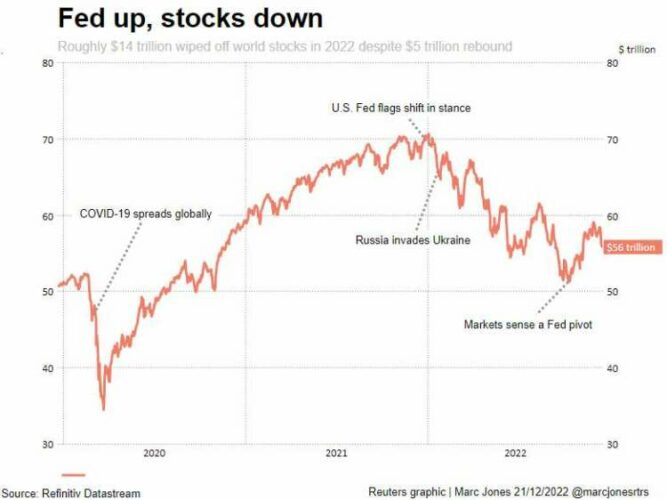 Initial public offerings and bond sales have also slumped almost everywhere apart from the Middle East, while commodities have been the best performing asset class for a second consecutive year.

Natural gas’ more than 50% rise is the best overall in that group, albeit largely due to the war in Ukraine which had hoisted prices 140% at one point.

Mounting recession worries along with the West’s plan to stop buying Russian oil mean Brent has given back the entire 80% it made in the first quarter, as have wheat and corn. 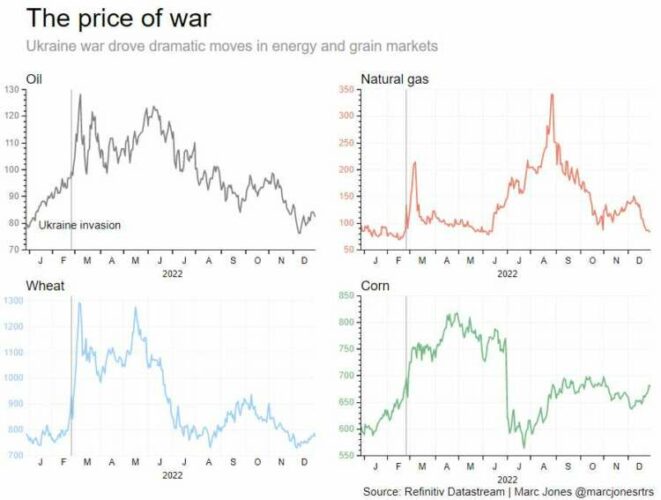 The cryptomarket has been even more chaotic. Bitcoin ends 2022 robbed of its cocktail of cheap money and leveraged bets.

The pre-eminent cryptocurrency has lost 60% of its value, while the wider crypto market has shrunk by $1.4 trillion, squashed by the collapse of Sam Bankman-Fried’s FTX empire, Celsius and supposed ‘stablecoins’ terraUSD and Luna.

“What has gone in global markets this year has been traumatic,” said EFG Bank Chief Economist and ex-Deputy Governor of Ireland’s central bank, Stefan Gerlach.

“But if central banks hadn’t underestimated the rise in inflation so dramatically and had to jack up interest rates, it wouldn’t have been so catastrophic”.