Our website publishes news, press releases, opinion and advertorials on various financial organizations, products and services which are commissioned from various Companies, Organizations, PR agencies, Bloggers etc. These commissioned articles are commercial in nature. This is not to be considered as financial advice and should be considered only for information purposes. It does not reflect the views or opinion of our website and is not to be considered an endorsement or a recommendation. We cannot guarantee the accuracy or applicability of any information provided with respect to your individual or personal circumstances. Please seek Professional advice from a qualified professional before making any financial decisions. We link to various third-party websites, affiliate sales networks, and to our advertising partners websites. When you view or click on certain links available on our articles, our partners may compensate us for displaying the content to you or make a purchase or fill a form. This will not incur any additional charges to you. To make things simpler for you to identity or distinguish advertised or sponsored articles or links, you may consider all articles or links hosted on our site as a commercial article placement. We will not be responsible for any loss you may suffer as a result of any omission or inaccuracy on the website.
Home Headlines Global growth headed down as inflation surge to endure
Headlines

Global growth headed down as inflation surge to endure 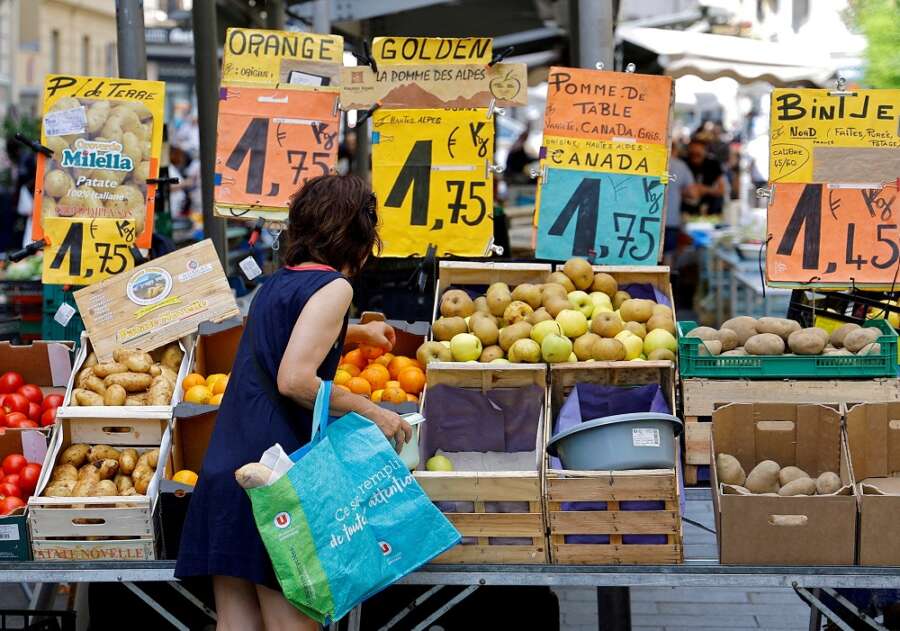 BENGALURU (Reuters) – The global economy is mired in a serious slowdown, with some key economies at high risk of recession and only sparse meaningful cooling in inflation likely over the coming year, according to Reuters polls of hundreds of economists worldwide.

Most central banks are only part-way through a still-urgent cycle of interest rate rises as many policymakers make up for a collective error in judgment last year thinking supply chain-related inflation pressures would not last.

That carries with it another risk – central banks moving too quickly without taking time to assess damage from the fastest interest rate rises in more than a generation following over a decade of near-zero rates.

Despite their aggressive response – in some cases, the most in several decades – inflation has yet to ease in most of the near-50 economies covered in the June 27-July 25 Reuters surveys of more than 500 forecasters around the world.

The U.S. Federal Reserve, due to hike rates by another 75 basis points later on Wednesday, is a case in point. U.S. inflation, now at a four-decade high of 9.1%, is not expected to cool to the Fed’s 2% target until at least 2024.

Galloping inflation has wrought an acute cost of living crisis in much of the world, pushing up recession risks.

There is already a median 40% chance of recession happening in the world’s largest economy over the coming year, up sharply from three months ago, and those chances have risen for the euro zone and Britain too.

“Recessionary dynamics are increasingly evident in our forecast. Notably, we now see several major economies – including the United States and the euro area – slipping into recession. Even so, the timing of these downturns varies, and they are expected to be relatively mild,” noted Nathan Sheets, chief global economist at Citi.

“By any metric, the global economy is slowing and prospects are deteriorating. Global recession is, indisputably, a clear and present danger.”

Global growth is forecast to slow to 3.0% this year followed by 2.8% next, both downgraded from 3.5% and 3.4% in the last quarterly poll in April. That compares with the International Monetary Fund’s latest forecasts of 3.2% and 2.9%.

Of the 48 economies covered, 77% of growth forecasts were downgraded for next year with only 13% left unchanged and 10% upgraded. 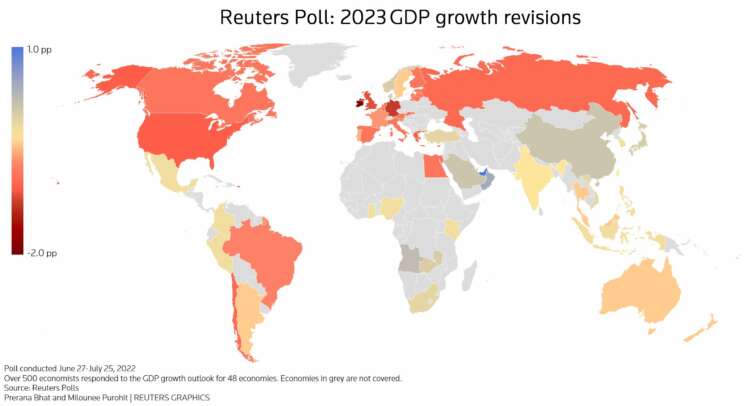 Similarly, inflation forecasts for nearly 90% of the 48 economies were upgraded for next year and over 45% for 2024. That means no quick respite from a cost of living crisis pinching households.

Indeed, the vast majority of respondents said it would be at least next year before the crisis eases significantly (86%) with more than a third (39%) saying over a year.

“There is still a lot of suffering to come, especially in the second half of the year. This crisis will only grow worse unless supply-driven inflation cools,” said Erik-Jan van Harn, macro strategist at Rabobank.

For example, Germany, Europe’s largest economy, is grappling with severe reductions in gas supply from Russia arising from Western sanctions imposed on Moscow over its invasion of Ukraine, and is bracing for a difficult winter.

Among the top 19 global central banks covered, a slight majority, 11, will see inflation returning to target next year.

The remaining eight will not, including some of the biggest ones like the Fed, the European Central Bank, the Bank of England and the Reserve Bank of India. 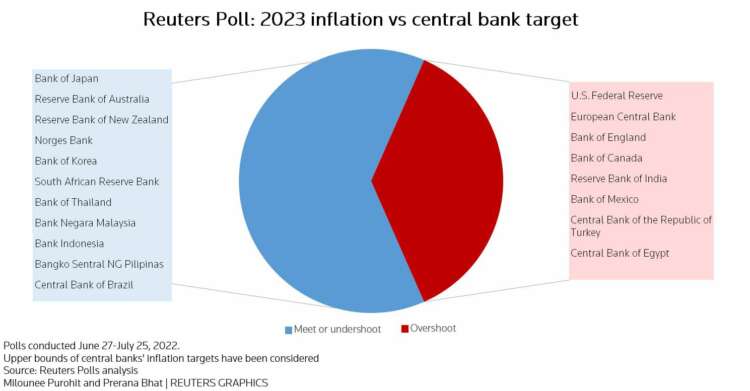 Emerging economy central banks covered by the polls are further through their expected hiking cycle, about three-quarters of the way, on average. This is skewed higher in part by the early and aggressive rate campaign by Brazil’s central bank, one of the first out of the gates.

Developed economy central banks, by contrast, are only on average about half-way through, held back in part by the European Central Bank, which only just began raising rates.

“We are particularly concerned about two developments. First, the shift to aggressive hikes at many central banks. This is an inevitable outcome of moving late. However, it greatly increases the risk of overkill, as there is not time to reassess the impact of the hikes,” noted Ethan Harris, global economist at Bank of America Securities.

“Second, we worry about feedback effects across regions. In particular, recessions in the U.S. tend to impact global confidence and growth even more than warranted by the size of the U.S. economy. Stay tuned.” 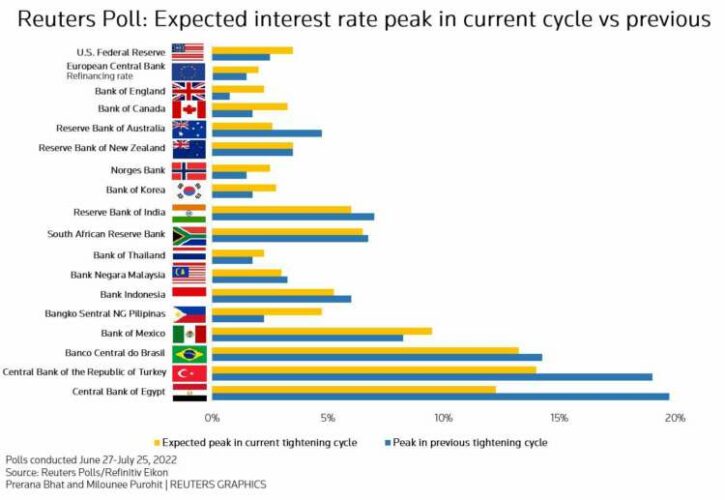 (Reporting by Hari Kishan; Polling, analysis and reporting by the Reuters Polls team in Bengaluru and bureaus in Buenos Aires, Johannesburg, London, Istanbul, Shanghai, and Tokyo; Editing by Ross Finley and Mark Heinrich)