Our website publishes news, press releases, opinion and advertorials on various financial organizations, products and services which are commissioned from various Companies, Organizations, PR agencies, Bloggers etc. These commissioned articles are commercial in nature. This is not to be considered as financial advice and should be considered only for information purposes. It does not reflect the views or opinion of our website and is not to be considered an endorsement or a recommendation. We cannot guarantee the accuracy or applicability of any information provided with respect to your individual or personal circumstances. Please seek Professional advice from a qualified professional before making any financial decisions. We link to various third-party websites, affiliate sales networks, and to our advertising partners websites. When you view or click on certain links available on our articles, our partners may compensate us for displaying the content to you or make a purchase or fill a form. This will not incur any additional charges to you. To make things simpler for you to identity or distinguish advertised or sponsored articles or links, you may consider all articles or links hosted on our site as a commercial article placement. We will not be responsible for any loss you may suffer as a result of any omission or inaccuracy on the website.
Home Headlines German inflation eased in November but too soon for ‘all-clear’
Headlines

German inflation eased in November but too soon for ‘all-clear’ 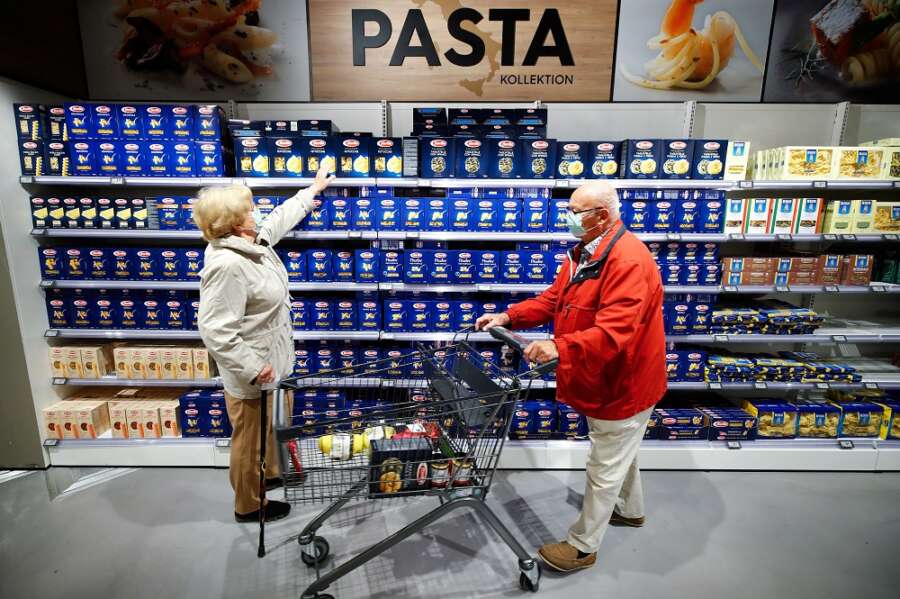 By Miranda Murray and Balazs Koranyi

BERLIN (Reuters) – Germany’s inflation cooled slightly in November, but remained near a record high, suggesting that while cost pressures have eased in Europe’s largest economy they are unlikely to weaken the European Central Bank’s resolve to tame prices.

German consumer prices, harmonised to compare with other European Union countries, rose by 11.3% on the year in November, preliminary data from the Federal Statistics Office showed on Tuesday, in line with forecasts by analysts polled by Reuters.

October saw the highest reading since comparable data going back to 1996, with harmonized inflation up 11.6% on the year.

Compared with October, prices were unchanged, the office added. Analysts had forecast a 0.1% month-on-month rise.

The annual increase was due to higher costs for food and energy, which have grown considerably since the war in Ukraine began and have had a substantial impact, the office said.

Energy prices eased slightly in November but were still up 38.4% compared with the same period last year, while food prices had increased by 21%, according to the office.

“It is too early to sound the all-clear because many utilities have announced significantly higher electricity and gas prices for January,” said Commerzbank chief economist Joerg Kraemer, who added that November inflation eased only because prices for fuel and heating oil had calmed down somewhat.

A one-off payment for household energy bills in December and a planned price cap on gas and electricity has helped stabilize consumer sentiment, but the Bundesbank has warned that these relief measures may not be enough to bring inflation down from the double digits. 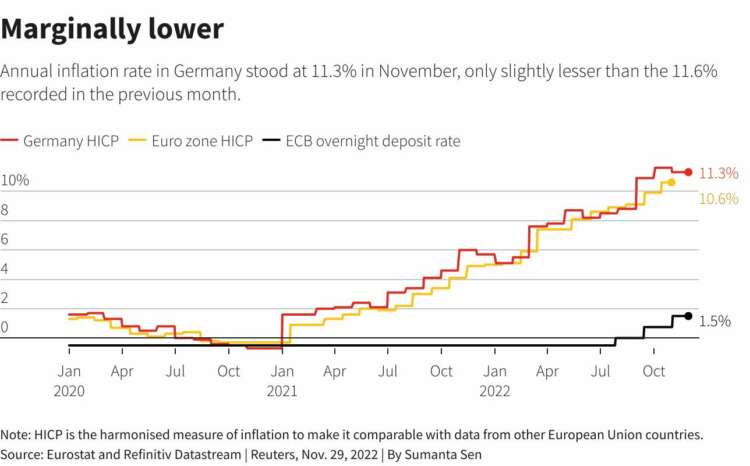 Lower inflation in Germany and Spain are likely be reflected in November euro zone inflation data to be published on Wednesday, with economists polled by Reuters expecting it to edge down to 10.4% in a flash reading after a record 10.6% on an annualised basis last month.

Such a small step down is unlikely to change ECB President Christine Lagarde’s assessment that euro zone inflation has not yet peaked, which likely dampened speculation that the ECB was about to take a gentler path with future rate increases.

The small drop, however, is likely to fuel the argument of dovish policymakers who argue that it is time for the ECB to slow down rate hikes and proceed more cautiously as it is getting to a point where it restricts growth.

The ECB has increased its rate on bank deposits by a record 200 basis points to 1.5% in three months to dampen demand in a bid to lower price growth.

Markets in recent weeks have been swinging back and forth between pricing a 50 and a 75 basis point hike from the ECB on Dec. 15, but the peak in the deposit rate is still seen at around 3%, suggesting another 150 basis points of hikes.

Adding to the case for caution at the ECB, euro zone economic sentiment rebounded more than expected in November, a separate indicator showed on Tuesday, suggesting that the bloc’s recession will be shallow and unlikely to significantly curb price pressures.

UK royals in U.S. spotlight as William and Kate visit

Economic headwinds set to push oil below $100 in 2023: Reuters Poll