Our website publishes news, press releases, opinion and advertorials on various financial organizations, products and services which are commissioned from various Companies, Organizations, PR agencies, Bloggers etc. These commissioned articles are commercial in nature. This is not to be considered as financial advice and should be considered only for information purposes. It does not reflect the views or opinion of our website and is not to be considered an endorsement or a recommendation. We cannot guarantee the accuracy or applicability of any information provided with respect to your individual or personal circumstances. Please seek Professional advice from a qualified professional before making any financial decisions. We link to various third-party websites, affiliate sales networks, and to our advertising partners websites. When you view or click on certain links available on our articles, our partners may compensate us for displaying the content to you or make a purchase or fill a form. This will not incur any additional charges to you. To make things simpler for you to identity or distinguish advertised or sponsored articles or links, you may consider all articles or links hosted on our site as a commercial article placement. We will not be responsible for any loss you may suffer as a result of any omission or inaccuracy on the website.
Home Headlines FTSE 100 slips on stronger pound; PM race takes focus
Headlines 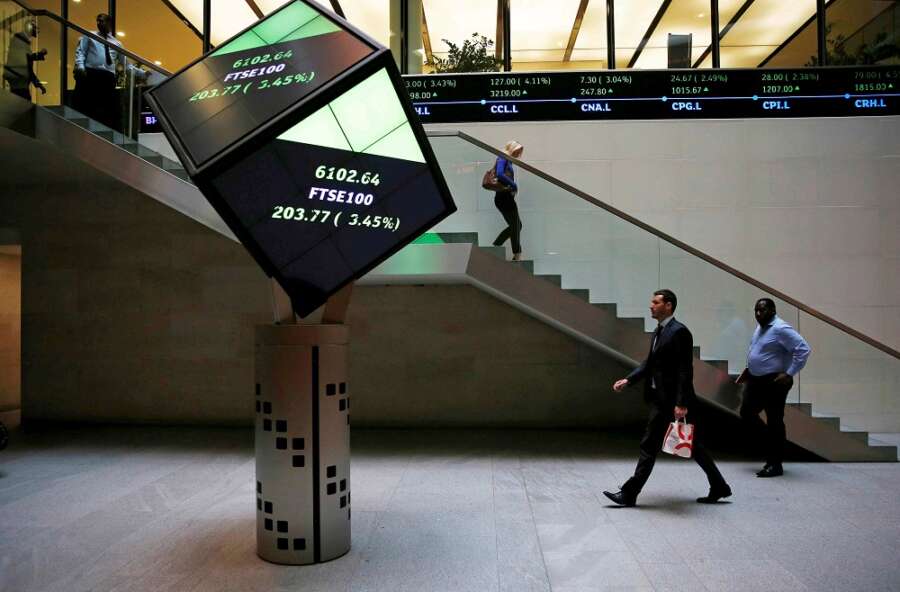 (Reuters) -UK’s FTSE 100 fell on Monday as a stronger pound and weaker oil prices weighed on the blue-chip index, while investors kept a close watch on the race for Britain’s next prime minister.

The exporter-heavy FTSE 100 fell 0.7% as the pound gained, with Rishi Sunak set to become Britain’s next prime minister after his rival Boris Johnson quit the race.

“He (Sunak) is not going to reduce taxes until they can be funded, so it’s going to be nothing that’s going to lead to a supply-driven growth that Truss tried to engineer,” said Patrick Armstrong, chief investment officer at Plurimi Wealth.

“There’s not going to be anything in terms of major changes, but the stability he will create will be a welcome news for UK investors.”

It has now been a month since the Truss government unveiled unfunded tax cut plans that battered investment confidence and put the government at loggerheads with the Bank of England.

However, the FTSE 100 is set to end the month higher as a historic reversal of the tax plans and hopes that former finance minister Sunak, the market’s preferred candidate, could win power instilled some confidence.

Ratings agency Moody’s on Friday cut its outlook for the UK to “negative” from “stable” over the ongoing political turmoil, weaker growth prospects and high inflation.

Meanwhile, a survey showed British businesses in October are suffering their worst month since January 2021, when they were under a COVID-19 lockdown.

Shares of other China-exposed stocks such as Prudential, HSBC and Standard Chartered dropped after Chinese President Xi Jinping’s newly unveiled leadership team heightened fears that economic growth will be sacrificed for ideology-driven policies.

Among single stocks, Mike Ashley’s Frasers Group edged up 0.6% after it said that it has increased its maximum exposure to German fashion house Hugo Boss to 840 million pounds ($954 million).

Pearson climbed higher by 4.1% after the education company said it was on track to meet its expectations for the year after nine months of strong trading, led by an “outstanding” result in English language learning.

No messing around with red-hot inflation: Five questions for the ECB