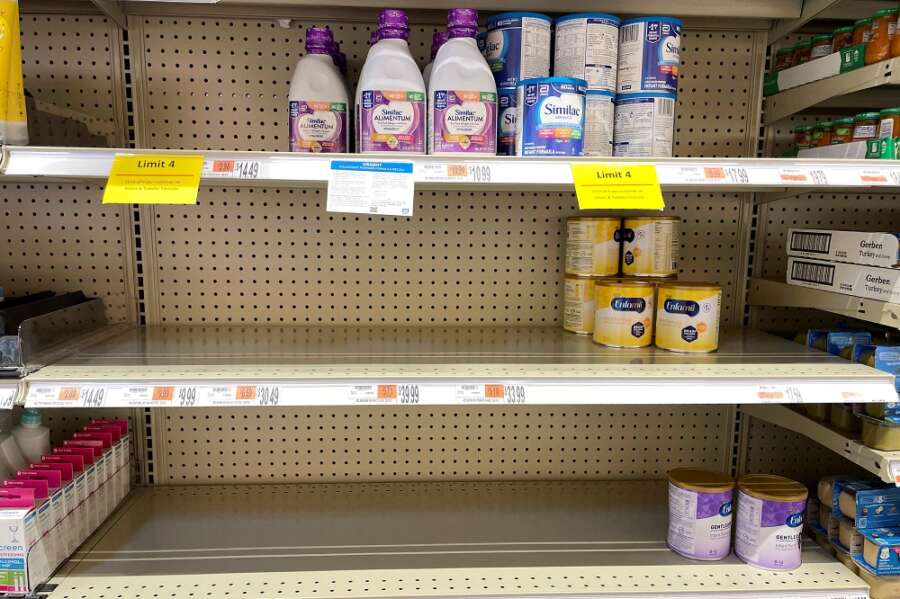 By Richa Naidu and Lisa Baertlein

LONDON/LOS ANGELES (Reuters) – Aptamil maker Danone SA has stepped up shipments of infant formula from Europe to address a shortage in the United States, according to U.S customs data and an analysis of ocean cargo data by shipping consultancy Ocean Audit for Reuters.

Danone, the world’s second biggest baby milk formula maker but a relatively small player in the United States, shipped much of the product from Britain and the Netherlands by ocean freight through its Nutricia North America arm.

This followed a Feb. 17 recall by top manufacturer Abbott Laboratories which recalled dozens of types of its Similac, Alimentum and EleCare formulas, creating one of the most urgent food shortages in recent history for U.S. families.

Between January and May, Danone’s Nutricia division more than tripled its ocean imports to North America, and more than 90% was delivered to the United States, said Steve Ferreira, CEO of Ocean Audit, which analysed the data exclusively for Reuters.

“We understand how important it is for families to access these specialized formulas which is why our absolute priority has been to increase production and supply of these medical formulas to serve the most vulnerable babies since the shortages arose in February,” a Danone spokesperson told Reuters.

On May 10, three days before U.S. President Joe Biden took to the airwaves with his plan for addressing the baby formula shortage, the Independent Quest sailed into the Port of Philadelphia to deliver 42,000 cans of Danone formula.

It was rapidly dispatched to Jeffersonville, Indiana to be distributed to retailers that for weeks had to limit how much infant formula mothers could buy.

“If it comes into the port on a Monday, I’m almost certain that they would have it out by Tuesday or Wednesday because the product’s so hot,” Ferreira said.

Ferreira said his data showed that from Jan. 1 to May 1 2021 Danone Nutricia sent nearly 770,000 cans of infant formula, filling roughly 100 cargo containers, to the North America. During the comparable period this year, the number skyrocketed to more than 2.4 million cans, he said.

Of that product, 93% went to East Coast U.S. ports, while 7% went to ocean gateways in Mexico, Ferreira said.

Separate U.S. customs data analyzed by Reuters shows that on Feb. 22, five days after the Abbott recall, nearly 38,000 kilograms (83,775.66 pounds) of Danone Nutricia cargo arrived in the United States from Britain and the Netherlands.

The customs data did not specify the exact nature of the cargo, but described some of it as “clinical nutrition powder” and “medical nutrition”. On March 9, roughly 34,000 kilograms more arrived, followed by nearly 30,000 kilograms on March 30.

Danone’s shares were up 1.6% in early afternooon trade on Paris’ blue-chip CAC 40 index.

The deliveries show how the suspension of Abbott’s factory and shortages are shaking up the market, giving some players an opportunity to get a share of the lucrative $4.8 billion U.S. baby formula industry.

“Abbott looks to have lost around 2000 basis points of share, going from 40% share to 20%,” Barclays analyst Warren Ackerman estimated on Friday referring to the U.S. market.

Reckitt Benckiser, the long-time No.2 player in the United States, told Reuters on Tuesday that it now accounts for more than 50% of total baby formula supply in the country.

The British company said it supplied just over a third of U.S. baby formula prior to Abbott’s recall.

It has boosted Enfamil production by about 30% and is making more frequent deliveries to stores as it looks to counter a nationwide shortage in U.S. supermarkets.

(Reporting by Richa Naidu in London and Lisa Baertlein in Los Angeles; Editing by David Gregorio in New York, Josephine Mason and Alexander Smith in London)