Our website publishes news, press releases, opinion and advertorials on various financial organizations, products and services which are commissioned from various Companies, Organizations, PR agencies, Bloggers etc. These commissioned articles are commercial in nature. This is not to be considered as financial advice and should be considered only for information purposes. It does not reflect the views or opinion of our website and is not to be considered an endorsement or a recommendation. We cannot guarantee the accuracy or applicability of any information provided with respect to your individual or personal circumstances. Please seek Professional advice from a qualified professional before making any financial decisions. We link to various third-party websites, affiliate sales networks, and to our advertising partners websites. When you view or click on certain links available on our articles, our partners may compensate us for displaying the content to you or make a purchase or fill a form. This will not incur any additional charges to you. To make things simpler for you to identity or distinguish advertised or sponsored articles or links, you may consider all articles or links hosted on our site as a commercial article placement. We will not be responsible for any loss you may suffer as a result of any omission or inaccuracy on the website.
Home Headlines Europe’s Wizz Air considering a Saudi operating license
Headlines 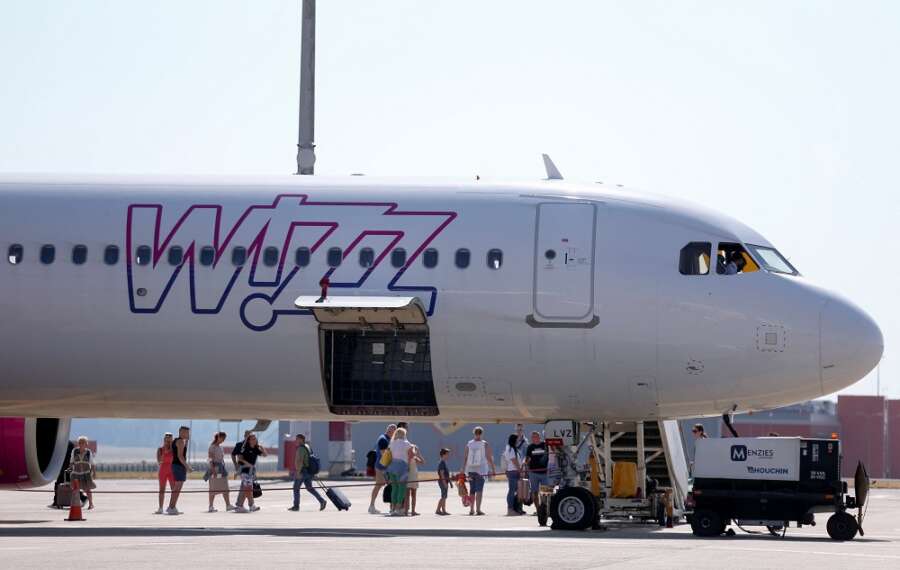 RIYADH (Reuters) -European budget carrier Wizz Air is considering basing an airline in Saudi Arabia as part an agreement signed with the government this year to develop the kingdom’s aviation sector, its chief executive said in an interview on Thursday.

Wizz Air, which said in May it would explore opportunities in Saudi Arabia, announced on Thursday it was launching direct flights to Riyadh, Jeddah and Dammam from 11 European cities starting early next year, including from Rome, Milan and Vienna.

“The scope of … exploring opportunities in the country may go beyond being an inbound carrier and may also involve making direct investments,” CEO Jozsef Varadi told Reuters from Riyadh.

He said that included considering applying for an Air Operator’s Certificate (AOC) in Saudi Arabia to base an airline there, without saying when a decision could be made on the AOC.

A Saudi license could allow a subsidiary or joint venture to operate domestic services in the kingdom, which has a population of about 36 million. It could also operate international flights that start in Saudi Arabia, opening up access to new markets.

Wizz Air, whose main operations are in central and eastern Europe, has AOCs in Hungary and the United Kingdom. Wizz Air Abu Dhabi, a branded joint venture between the airline and an Abu Dhabi sovereign wealth fund, has a United Arab Emirates AOC.

Saudi Arabia liberalised its tourism industry in 2019, aiming to make it significantly easier for foreigners to visit the kingdom, which had been relatively closed off for many decades.

The move to open up the country is part of a push under its de facto ruler, Crown Prince Mohammed bin Salman, to develop the economy into a regional trade hub and lessen its dependence on oil.

“This country is on the move. The country is transforming itself. It’s very ambitious … we want to be part of it,” Varadi said.

He also said despite there being a significant commercial risk in launching the flights, he believed there would be strong demand for travel from Europe to Saudi Arabia, and from the kingdom to Europe.