Our website publishes news, press releases, opinion and advertorials on various financial organizations, products and services which are commissioned from various Companies, Organizations, PR agencies, Bloggers etc. These commissioned articles are commercial in nature. This is not to be considered as financial advice and should be considered only for information purposes. It does not reflect the views or opinion of our website and is not to be considered an endorsement or a recommendation. We cannot guarantee the accuracy or applicability of any information provided with respect to your individual or personal circumstances. Please seek Professional advice from a qualified professional before making any financial decisions. We link to various third-party websites, affiliate sales networks, and to our advertising partners websites. When you view or click on certain links available on our articles, our partners may compensate us for displaying the content to you or make a purchase or fill a form. This will not incur any additional charges to you. To make things simpler for you to identity or distinguish advertised or sponsored articles or links, you may consider all articles or links hosted on our site as a commercial article placement. We will not be responsible for any loss you may suffer as a result of any omission or inaccuracy on the website.
Home Headlines European shares kick off November on bright note
Headlines 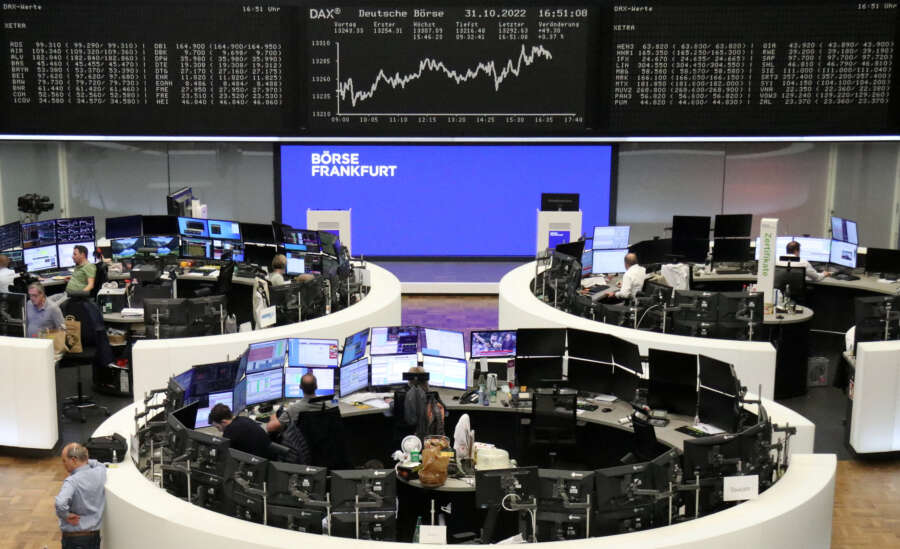 By Shreyashi Sanyal and Ankika Biswas

(Reuters) -European shares gained on Tuesday, starting November on an upbeat note amid growing hopes that the U.S. Federal Reserve would slow down the pace of its interest rate hikes.

The pan-European STOXX 600 index rose 0.6% to hit a near seven-week closing high, with miners and retailers leading the gains.

Investors expect the U.S. central bank to raise its interest rates by 75 basis points on Wednesday, but hopes remain the central bank will deliver a smaller 50-bp increase in December.

“All eyes are on the Fed, so I am expecting markets to cage up today … If the Fed surprises with a more dovish stance, I’m expecting a strong move higher in risk assets and the dollar to move much lower,” said Giles Coghlan, chief market analyst at HYCM.

Further, rumours based on an unverified note circulating on social media that China was planning a reopening from strict COVID curbs in March triggered a rush to luxury names, which have major exposure to China.

Luxury giants including LVMH, Kering, Pernod Ricard and Hermes International advanced between 1.9% and 3.0%.

“There are social media reports on China easing its zero-COVID policy and look at how much relief it has brought to markets starved for some good news out of China,” Coghlan added.

The earnings season has also been largely supportive for markets. Out of the 163 STOXX 600 companies that have reported results so far, 58.3% exceeded analyst estimates, Refintiv data showed. In a typical quarter, 53% companies beat estimates.

Prosus NV jumped 9.3% after the technology investment firm denied a press report on a potential sale of its 28% stake in Chinese software and gaming giant Tencent.

(Reporting by Shreyashi Sanyal in Bengaluru; Editing by Subhranshu Sahu and David Evans)

Elon Musk, who runs four other companies, will now be Twitter CEO