Our website publishes news, press releases, opinion and advertorials on various financial organizations, products and services which are commissioned from various Companies, Organizations, PR agencies, Bloggers etc. These commissioned articles are commercial in nature. This is not to be considered as financial advice and should be considered only for information purposes. It does not reflect the views or opinion of our website and is not to be considered an endorsement or a recommendation. We cannot guarantee the accuracy or applicability of any information provided with respect to your individual or personal circumstances. Please seek Professional advice from a qualified professional before making any financial decisions. We link to various third-party websites, affiliate sales networks, and to our advertising partners websites. When you view or click on certain links available on our articles, our partners may compensate us for displaying the content to you or make a purchase or fill a form. This will not incur any additional charges to you. To make things simpler for you to identity or distinguish advertised or sponsored articles or links, you may consider all articles or links hosted on our site as a commercial article placement. We will not be responsible for any loss you may suffer as a result of any omission or inaccuracy on the website.
Home Headlines Cryptoverse: After Merge, ether heads for a $20 billion Shanghai splurge
Headlines

Cryptoverse: After Merge, ether heads for a $20 billion Shanghai splurge 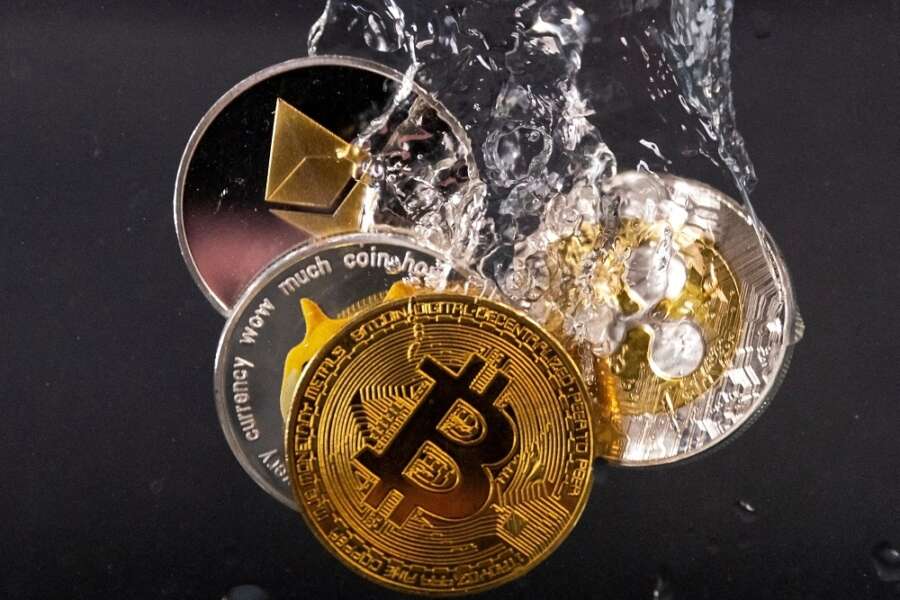 (Reuters) – The Merge came, saw and conquered. Not that you’d guess from crypto prices.

The Ethereum blockchain’s mega-upgrade finally went live on Sept. 15, moving it to a less energy-intensive “proof of stake” (PoS) system with hardly a hiccup.

Even though anticipation of the event had seen ether rise about 85% from its June doldrums, it has since sunk 19%, hit along with bitcoin and other risky assets by investor angst over inflation and central-bank policy.

Nonetheless, many market players are bullish about the long-term prospects of Ethereum and its native cryptocurrency.

“Previously, we have talked to sovereign wealth funds and central banks to help build their digital asset allocations… but direct investment has been voted down due to energy concerns,” said Markus Thielen, chief investment officer at asset manager IDEG Limited.

“With Ethereum moving to PoS, this clearly solves this last pillar of concern.”

Some crypto investors are now turning their attention to the next event that could shake up prices.

The next significant upgrade for Ethereum is the “Shanghai”, expected by market participants in around six months’ time, which is aimed at reducing its high transaction costs.

It would allow validators, who have deposited ether tokens on the blockchain in exchange for a yield, to withdraw their staked coins, to hold or sell.

There’s a lot at stake: over $20 billion of ether deposits are currently locked up, according to data provider Glassnode.

The staked ether crypto coin – viewed as a bet on Ethereum’s long-term success as it cannot be redeemed until Shanghai happens – is trading at nearly parity with ether at 0.989 ether, according to CoinMarketCap data, indicating confidence in future upgrades.

Beyond Shanghai, a slew of other upgrades are planned for Ethereum, which co-founder Vitalik Buterin has nicknamed “the surge”, “verge”, “purge” and “splurge”.

The primary focus of future upgrades is likely to be on the blockchain’s ability to process more transactions.

“Because the Merge was delayed for several years, investors, traders, and end-users have a great deal of trepidation around when Ethereum will meaningfully scale,” said Alex Thorn, head of firmwide research at blockchain-focused bank Galaxy Digital.

Paul Brody, global blockchain leader at EY, said: “Ethereum’s future needs to, and will, scale to hundreds of millions of transactions a day.” 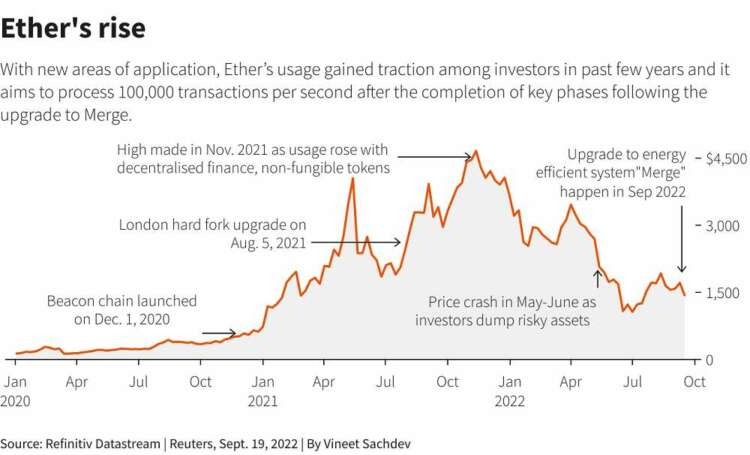 The Merge’s primary goal was to reduce Ethereum’s energy usage as cryptocurrencies come under fire for their massive carbon footprint. The blockchain’s energy consumption was cut by an estimated 99.95%, the developers claim, which could tempt powerful institutional investors, formerly constrained by environmental, social and governance (ESG) concerns.

However, institutional investors aren’t jumping in just yet, as a fearsome macro environment chills the waters of risk appetite.

Longer-term, though, the switch to PoS is expected to decrease the rate at which ether tokens are issued – potentially by up to 90% – which should drive up prices.

Additionally, annual yields of 4.1% for staking ether tokens to validate transactions could prove tempting for investors.

However, while the proof-of-stake method allows for these lucrative yields, many crypto purists point out that it moves Ethereum away from a purely decentralized model as the biggest validators could exercise greater influence over the blockchain.

For the time being, however, the Ethereum world might be advised to enjoy the Merge moment.

“There may be volatility in the days to come,” said analysts at Kaiko Research. “But for now the community can take a well-earned victory lap.”