Our website publishes news, press releases, opinion and advertorials on various financial organizations, products and services which are commissioned from various Companies, Organizations, PR agencies, Bloggers etc. These commissioned articles are commercial in nature. This is not to be considered as financial advice and should be considered only for information purposes. It does not reflect the views or opinion of our website and is not to be considered an endorsement or a recommendation. We cannot guarantee the accuracy or applicability of any information provided with respect to your individual or personal circumstances. Please seek Professional advice from a qualified professional before making any financial decisions. We link to various third-party websites, affiliate sales networks, and to our advertising partners websites. When you view or click on certain links available on our articles, our partners may compensate us for displaying the content to you or make a purchase or fill a form. This will not incur any additional charges to you. To make things simpler for you to identity or distinguish advertised or sponsored articles or links, you may consider all articles or links hosted on our site as a commercial article placement. We will not be responsible for any loss you may suffer as a result of any omission or inaccuracy on the website.
Home Headlines Climate activists plan daily protests after blocking 10 UK oil terminals
Headlines 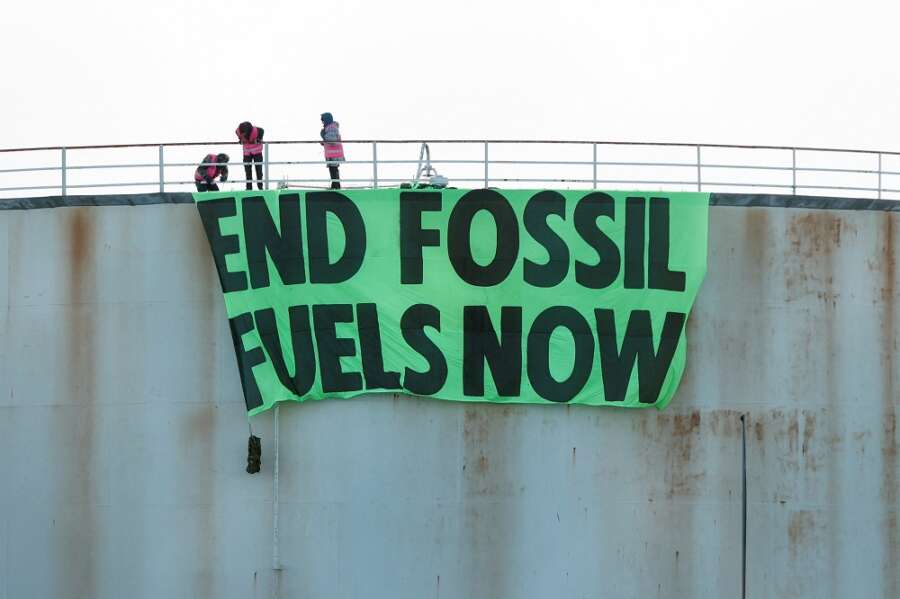 By Andrew MacAskill and Muvija M

LONDON (Reuters) -Hundreds of climate change protesters blocked oil terminals across Britain on Friday with some supporters climbing on top of oil tankers as part of their campaign to force the government to end its reliance on fossil fuels.

Exxon Mobil said work should resume at its oil terminals soon after temporarily suspending operations at four sites because of the protests.

Police in Essex, just east of London, said they were dealing with three incidents and 13 people had been arrested.

The protests began on the same day that people in Britain saw the largest hike in the cost of energy in decades due to record global gas prices, and as the government prepares to outline new ways to meet the country’s energy needs.

Extinction Rebellion said it plans to increase the pressure on the government with daily protests in London, which are due to begin on April 9. The group said it aims to cause enough disruption “to create a tipping point moment”.

“We will be more disruptive than ever, and we will be impossible to ignore,” Andrew Smith, a spokesman for the group, told journalists.

Extinction Rebellion wants an emergency response from governments and a mass move away from polluting industries to avert the worst scenarios of global warming devastation outlined by scientists.

Prime Minister Boris Johnson’s government plans to publish its new energy strategy next week. It is expected to boost its domestic supplies in an effort to shield Britain from a surge in prices caused by Russia’s invasion of Ukraine.

Britain has committed to reaching a net zero goal for carbon emissions by 2050.

But those plans have come under pressure following the Ukraine crisis, with the government saying it would step up domestic production of oil and gas after announcing it would phase out imports of Russian oil by the end of 2022.

The protests on Friday saw the involvement of Just Stop Oil, which describes itself as a coalition of groups working together to bring an end to the exploration, development, and production of fossil fuels.

Last month, an Everton-Newcastle Premier League soccer match was held up for several minutes after a protestor wearing a t-shirt with the words “Just Stop Oil” tied himself to a goal post.