Our website publishes news, press releases, opinion and advertorials on various financial organizations, products and services which are commissioned from various Companies, Organizations, PR agencies, Bloggers etc. These commissioned articles are commercial in nature. This is not to be considered as financial advice and should be considered only for information purposes. It does not reflect the views or opinion of our website and is not to be considered an endorsement or a recommendation. We cannot guarantee the accuracy or applicability of any information provided with respect to your individual or personal circumstances. Please seek Professional advice from a qualified professional before making any financial decisions. We link to various third-party websites, affiliate sales networks, and to our advertising partners websites. When you view or click on certain links available on our articles, our partners may compensate us for displaying the content to you or make a purchase or fill a form. This will not incur any additional charges to you. To make things simpler for you to identity or distinguish advertised or sponsored articles or links, you may consider all articles or links hosted on our site as a commercial article placement. We will not be responsible for any loss you may suffer as a result of any omission or inaccuracy on the website.
Home Headlines Carrefour upbeat on turnaround after Brazil bolsters sales
Headlines 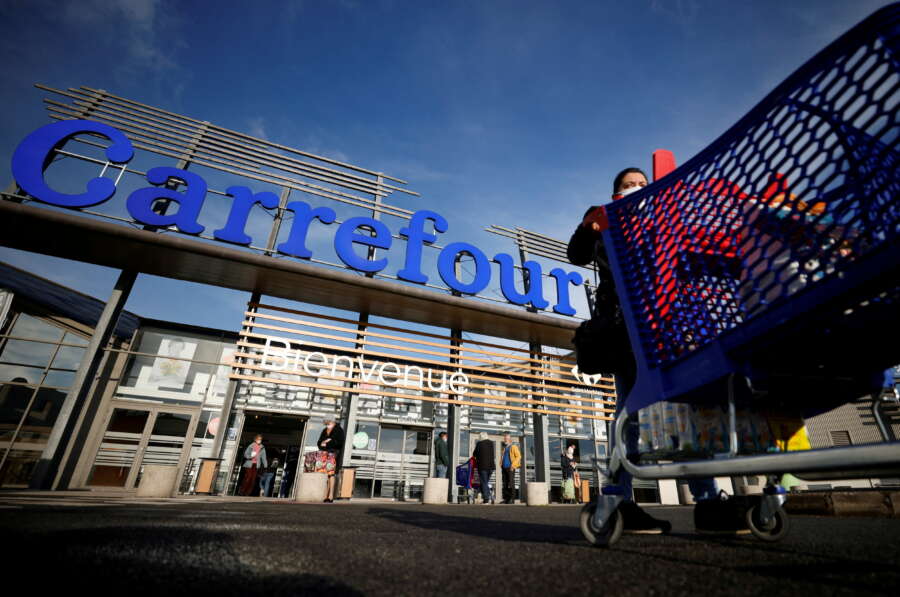 PARIS (Reuters) – Carrefour said on Wednesday it was confident it would achieve the strategic goals set under its turnaround plan after its sales growth accelerated in the first quarter, thanks notably to strong growth in Brazil.

Europe’s largest food retailer reiterated a target to generate free cash flow above 1 billion euros ($1.1 billion) in 2022 and with cost inflation accelerating, said it now aimed for more than 900 million euros in cost savings this year.

Carrefour also said that having achieved 400 million euros on the 750 million euros share buyback programme it announced in February, it would launch the second tranche in the coming days.

Carrefour reported that its first quarter sales reached 20.239 billion euros ($22 billion), marking like-for-like growth of 3.4%, driven by solid growth in Brazil and Spain while in the core French market sales were flat.

This was an acceleration from 0.7% sales growth for the group in the fourth quarter 2021.

Carrefour is in the last leg of a five-year plan begun in January 2018 to cut costs and boost e-commerce investment to improve profit and sales, as it battles online rivals such as Amazon and discounters like Lidl and unlisted Leclerc.

Chairman and CEO Alexandre Bompard, whom Carrefour reappointed in May 2021 for another three years, is working on a new strategic plan and an asset review as part of the process.

Carrefour shares have gained 27% so far this year, but still trade 7% below their level when Bompard took over in July 2017.