Home Headlines Bolivian boy turns photographer on iconic salt flats – with help from a dinosaur
Our website publishes news, press releases, opinion and advertorials on various financial organizations, products and services which are commissioned from various Companies, Organizations, PR agencies, Bloggers etc. These commissioned articles are commercial in nature. This is not to be considered as financial advice and should be considered only for information purposes. It does not reflect the views or opinion of our website and is not to be considered an endorsement or a recommendation. We cannot guarantee the accuracy or applicability of any information provided with respect to your individual or personal circumstances. Please seek Professional advice from a qualified professional before making any financial decisions. We link to various third-party websites, affiliate sales networks, and to our advertising partners websites. When you view or click on certain links available on our articles, our partners may compensate us for displaying the content to you or make a purchase or fill a form. This will not incur any additional charges to you. To make things simpler for you to identity or distinguish advertised or sponsored articles or links, you may consider all articles or links hosted on our site as a commercial article placement. We will not be responsible for any loss you may suffer as a result of any omission or inaccuracy on the website.
Headlines 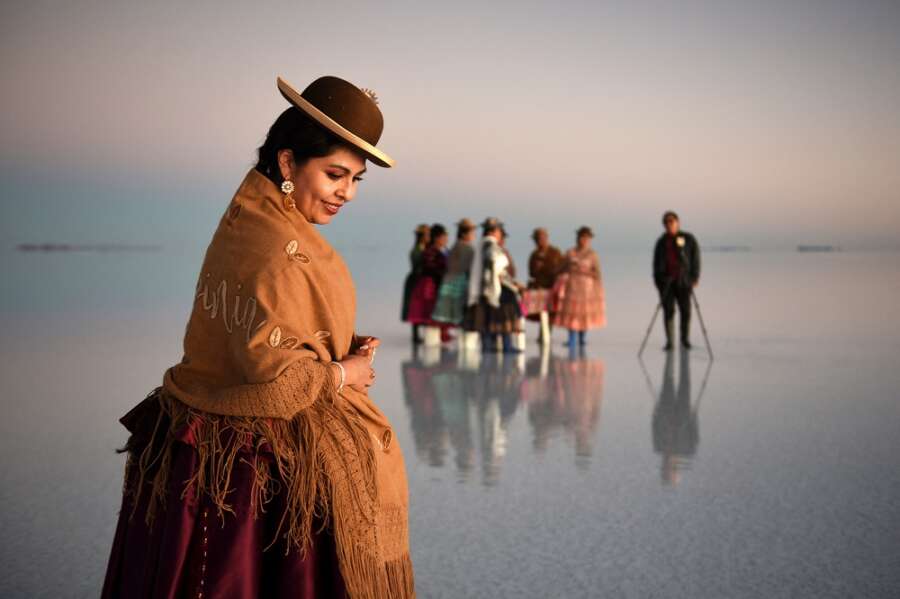 By Santiago Limachi and Marcelo Rochabrun

Piter Condori makes use of an unusual trick of perspective on the iconic salt flats, where the even white ground stretches to the horizon, allowing skillful snappers to make small objects close to the camera appear to be much larger and further away.

In his free time on the weekend, he takes photos of the Spinosaurus appearing to chase and attack tourists across the white plains. In others he uses an empty beer bottle from which his subjects appear to be being poured out of or climbing into.

Condori said this helps get him extra pocket money and to help his parents buy food, which has got pricier amid high inflation. Tourism meanwhile has declined in recent years due to the impact of the coronavirus pandemic.

“I help to buy onions, potatoes, and lettuce. I buy clothes for my brothers and toys. When they need school supplies. I give them money for playtime so they can buy things,” said Condori, who can earn between $9-15 each day he takes photos.

The Uyuni salt flats in southern Bolivia is one of the Andean country’s top tourist attractions. The vast area is also a trove of electric vehicle battery metal lithium, though there is little production and few economic benefits so far.

The pandemic has hit locals hard.

Two thousand Bolivian tourism operators nationwide are pushing the government to relax restrictions on international tourism. The Bolivian Chamber of Hotels and Tourism says the pandemic has cut tourism in the country by 90%.

“With the pandemic, we were in crisis. We didn’t even have enough money to eat,” said Diego Condori, Piter’s father, who works in the salt business. Piter’s mother sells handicrafts on the salt flat and five other siblings sometimes help out too.

“We had small savings, and they ran out. We have dedicated ourselves to working in tourism as a family. Our children help us to take photos,” the father added.