Our website publishes news, press releases, opinion and advertorials on various financial organizations, products and services which are commissioned from various Companies, Organizations, PR agencies, Bloggers etc. These commissioned articles are commercial in nature. This is not to be considered as financial advice and should be considered only for information purposes. It does not reflect the views or opinion of our website and is not to be considered an endorsement or a recommendation. We cannot guarantee the accuracy or applicability of any information provided with respect to your individual or personal circumstances. Please seek Professional advice from a qualified professional before making any financial decisions. We link to various third-party websites, affiliate sales networks, and to our advertising partners websites. When you view or click on certain links available on our articles, our partners may compensate us for displaying the content to you or make a purchase or fill a form. This will not incur any additional charges to you. To make things simpler for you to identity or distinguish advertised or sponsored articles or links, you may consider all articles or links hosted on our site as a commercial article placement. We will not be responsible for any loss you may suffer as a result of any omission or inaccuracy on the website.
Home Headlines Bill Gates, South Korea expand global health partnership
Headlines 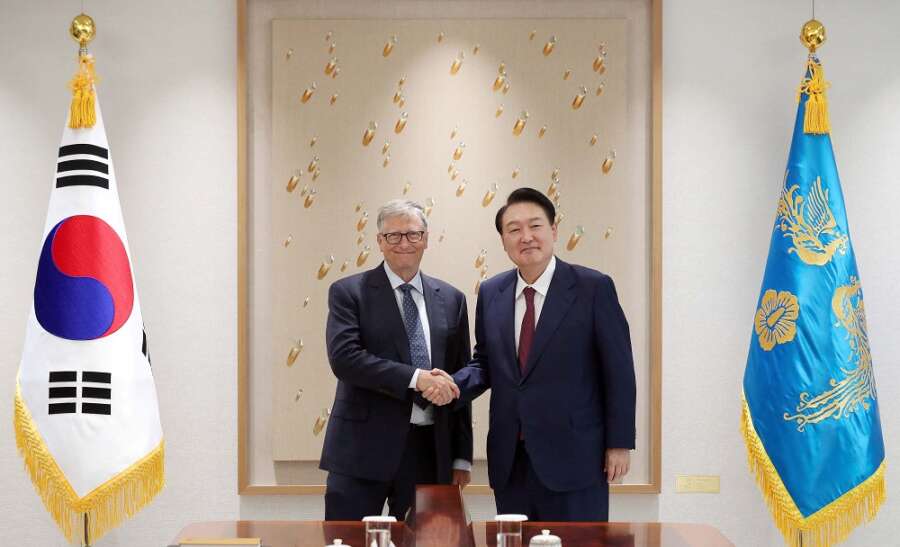 By Joori Roh and Joyce Lee

SEOUL (Reuters) – South Korea agreed on Tuesday to expand its global health partnership with the foundation set up by Microsoft Corp co-founder and philanthropist Bill Gates.

The deal came after Gates arrived in South Korea late on Monday, calling for Seoul to play a bigger role in global health and to increase aid.

The agreement includes strengthening private and public sector cooperation between the Bill & Melinda Gates Foundation and South Korea in projects such as a global health research fund, and stepping up cooperation with health organisations including CEPI, South Korea’s foreign and health ministries said in a statement.

South Korea will also help to train 370 people from lower-income countries in vaccine production this year, which will be expanded to 2,000 people per year starting 2026, the ministries said.

“This is a crisis moment for global health. This is also a fantastic time for our foundation to strengthen partnership with Korea, providing great ideas for new tools and more resources to help those in need,” Gates said in a speech at the National Assembly earlier on Tuesday.

While meeting with South Korean National Assembly Speaker Kim Jin-pyo and other lawmakers, Gates called for increasing funding for groups that help improve health conditions in poor countries and prevent pandemics, and asked if South Korea would be able to scale up its international aid to 0.3% of GDP.

Gates also met with leaders at SK Bioscience which received $10 million in funding from CEPI to develop its COVID-19 vaccine.

(This story has been refiled to reflect the National Assembly’s official correction of figure of aid to 0.3% of GDP, not 1.3%, in paragraph 7)