Our website publishes news, press releases, opinion and advertorials on various financial organizations, products and services which are commissioned from various Companies, Organizations, PR agencies, Bloggers etc. These commissioned articles are commercial in nature. This is not to be considered as financial advice and should be considered only for information purposes. It does not reflect the views or opinion of our website and is not to be considered an endorsement or a recommendation. We cannot guarantee the accuracy or applicability of any information provided with respect to your individual or personal circumstances. Please seek Professional advice from a qualified professional before making any financial decisions. We link to various third-party websites, affiliate sales networks, and to our advertising partners websites. When you view or click on certain links available on our articles, our partners may compensate us for displaying the content to you or make a purchase or fill a form. This will not incur any additional charges to you. To make things simpler for you to identity or distinguish advertised or sponsored articles or links, you may consider all articles or links hosted on our site as a commercial article placement. We will not be responsible for any loss you may suffer as a result of any omission or inaccuracy on the website.
Home Headlines Bezos’ Blue Origin suffers rocket failure during uncrewed mission
Headlines 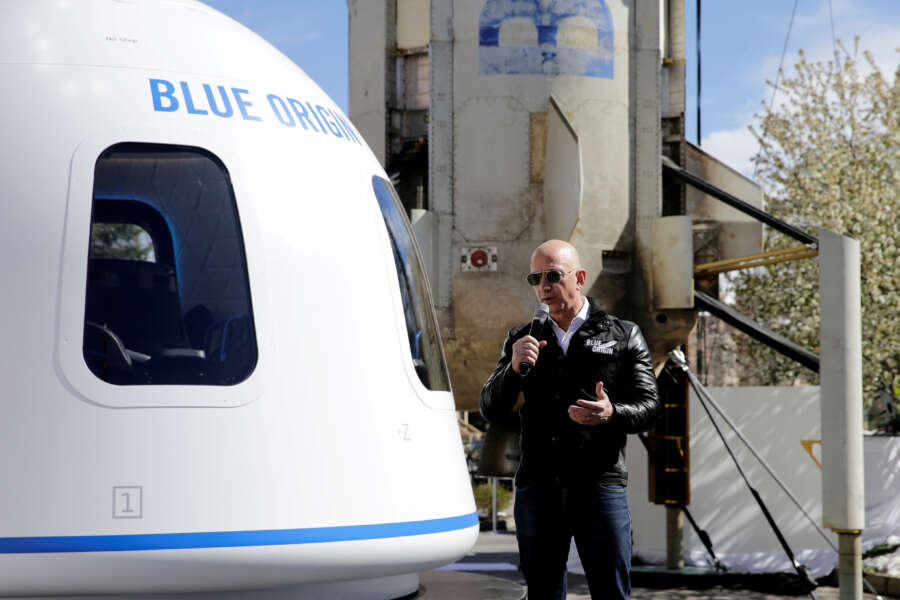 WASHINGTON (Reuters) -A rocket from Jeff Bezos’ space company Blue Origin failed mid-flight shortly after liftoff on Monday, aborting its cargo capsule to safety before crashing into the Texas desert, according to the company and a live video stream of the mission.

Without any humans on board, the rocket lifted off from Blue Origin’s West Texas launch site Monday morning as the company’s 23rd New Shepard mission, aiming to send NASA-funded experiments and other payloads to the edge of space to float for a few minutes in microgravity.

But just over a minute after liftoff, and roughly 5 miles (8.05 km) above ground, the New Shepard booster’s engines flared unexpectedly during ascent. The capsule’s abort motor system triggered almost immediately, jetting the craft away from the faulty rocket before parachuting back to land intact.

The booster crashed within a designated hazard area, according to the U.S. Federal Aviation Administration, which oversees and regulates launchsite safety. Blue Origin’s fleet of New Shepard rockets is grounded until the FAA signs off on the outcome of a company-led investigation into the mishap, the agency added.

“During today’s flight, the capsule escape system successfully separated the capsule from the booster,” Blue Origin tweeted after the mishap. “The booster impacted the ground. There are no reported injuries; all personnel have been accounted for.”

The mission, called NS-23, was the first New Shepard launch without humans aboard in over a year, and the fourth mission in 2022. The rocket-capsule system has flown 31 people in all under Blue Origin’s suborbital space tourism business, in which paying customers are launched some 62 miles high for a few minutes of microgravity at the edge of space before their capsule returns to land under parachutes.

Billionaire Bezos, the Amazon.com Inc founder who started Blue Origin in 2000, was among the first passengers to fly New Shepard during its debut crewed mission in 2021.

The rocket that crashed on Monday had flown eight times before, but it was not immediately clear whether those past missions included humans. Blue Origin flew New Shepard 15 times before its first crewed flight.

Most Twitter shareholders vote in favor of sale to Musk-sources