Our website publishes news, press releases, opinion and advertorials on various financial organizations, products and services which are commissioned from various Companies, Organizations, PR agencies, Bloggers etc. These commissioned articles are commercial in nature. This is not to be considered as financial advice and should be considered only for information purposes. It does not reflect the views or opinion of our website and is not to be considered an endorsement or a recommendation. We cannot guarantee the accuracy or applicability of any information provided with respect to your individual or personal circumstances. Please seek Professional advice from a qualified professional before making any financial decisions. We link to various third-party websites, affiliate sales networks, and to our advertising partners websites. When you view or click on certain links available on our articles, our partners may compensate us for displaying the content to you or make a purchase or fill a form. This will not incur any additional charges to you. To make things simpler for you to identity or distinguish advertised or sponsored articles or links, you may consider all articles or links hosted on our site as a commercial article placement. We will not be responsible for any loss you may suffer as a result of any omission or inaccuracy on the website.
Home News Australia COVID numbers hit a peak as Omicron outbreak strains domestic politics
News 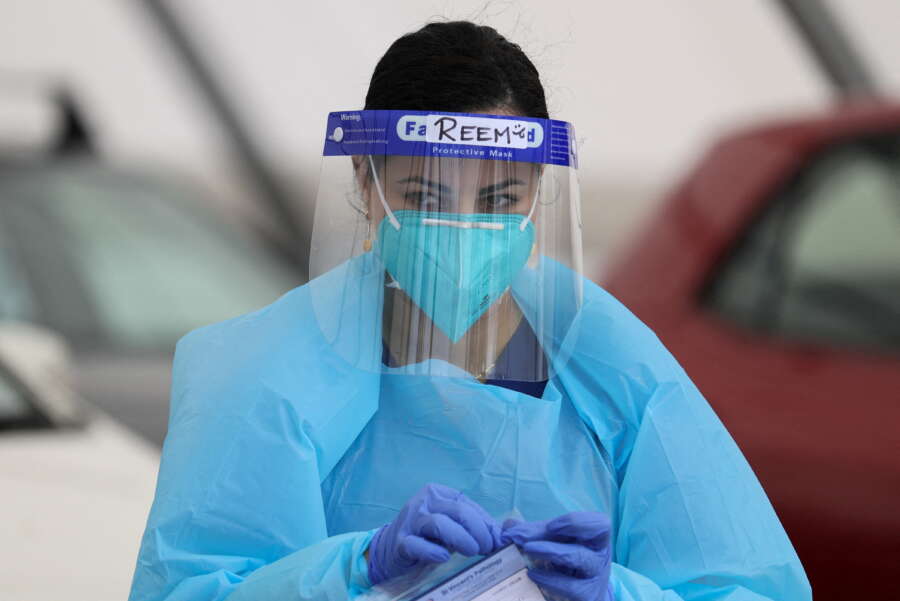 SYDNEY (Reuters) – Australia recorded another record surge in COVID-19 infections on Tuesday as an outbreak of the highly infectious Omicron variant disrupted reopening of the economy, while state leaders argued over domestic border controls.

The country reported 10,269 new cases of the coronavirus in the previous day, according to a Reuters calculation of state figures, once again surpassing its peak of a day earlier, as it grapples with a planned reopening while the new variant rages.

The state of South Australia, which has been experiencing a flare-up, was yet to report its latest numbers.

There were five COVID-19 deaths reported, taking the total fatalities to just over 2,200 since the start of the pandemic. Authorities did not specify whether any of the new deaths were related to the Omicron variant.

The Omicron variant, which medical experts say is more transmissible but less virulent than previous strains, began to spread in Australia just as the country got underway with plans to reopen for good after nearly two years of stop-start lockdowns.

With the resumption of rising case numbers – despite a vaccination rate of more than 90% for Australians aged over 16 – the country’s state leaders have brought back some containment measures like mandatory mask-wearing and QR code check-ins at public venues.

The rising case numbers have also led to mandatory self-isolation for thousands of workers in the hospitality, entertainment and airline sectors – the sectors worst hit by lockdowns – resulting in cancelled theatre shows, closed restaurants and postponed flights.

The outbreak has also fuelled a resumption of fractious domestic politics which defined much of the pandemic as some states resist calls to remove internal border controls.

New South Wales (NSW), home to Sydney and a third of Australia’s 25 million population, called on neighbouring Queensland to shift from mandatory clinical testing at the point of origin to on-the-spot rapid antigen testing for people travelling there.

In one case, a Sydney testing clinic sent incorrect negative test results to 400 COVID-positive people, then prematurely sent 950 people negative results when 486 were actually positive. The bungle was the result of “human error, and when people are under pressure, human errors are more frequent”, said Hazzard.

He called on Queensland to scrap mandatory clinical tests immediately, rather than after Jan. 1 as planned, but the Queensland authorities said the policy was working.

Queensland Health Minister Yvette D’Ath instead said the state would remove another testing rule for interstate arrivals: people arriving in the state would no longer have to take a virus test five days after arriving.

Australia’s international border remains effectively closed, but Australian nationals may return without mandatory hotel quarantine and the country has said it would allow certain skilled workers and foreign students in.