Our website publishes news, press releases, opinion and advertorials on various financial organizations, products and services which are commissioned from various Companies, Organizations, PR agencies, Bloggers etc. These commissioned articles are commercial in nature. This is not to be considered as financial advice and should be considered only for information purposes. It does not reflect the views or opinion of our website and is not to be considered an endorsement or a recommendation. We cannot guarantee the accuracy or applicability of any information provided with respect to your individual or personal circumstances. Please seek Professional advice from a qualified professional before making any financial decisions. We link to various third-party websites, affiliate sales networks, and to our advertising partners websites. When you view or click on certain links available on our articles, our partners may compensate us for displaying the content to you or make a purchase or fill a form. This will not incur any additional charges to you. To make things simpler for you to identity or distinguish advertised or sponsored articles or links, you may consider all articles or links hosted on our site as a commercial article placement. We will not be responsible for any loss you may suffer as a result of any omission or inaccuracy on the website.
Home Business Asian shares slump as Powell warns on inflation
Business 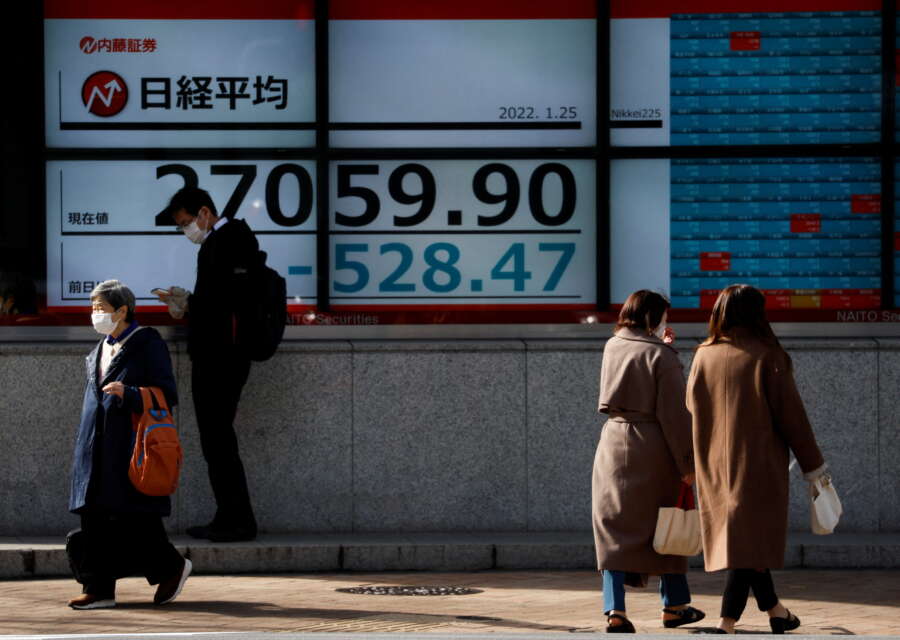 SHANGHAI (Reuters) – Asian shares fell to their lowest in more than 14 months, short-term U.S. yields rose to 23-month highs and the dollar strengthened on Thursday after the Federal Reserve’s chairman signaled plans to steadily tighten policy.

In its latest policy update on Wednesday, the Fed indicated it is likely to raise U.S. interest rates in March, as has been widely expected, and reaffirmed plans to end its bond purchases that month before launching a significant reduction in its asset holdings.

But in the follow-up press conference, Powell warned that inflation remains above the Fed’s long-run goal and supply chain issues may be more persistent than previously thought.

“There was a marked shift in terms of a relatively dovish statement and then a relatively hawkish press conference,” said David Chao, global market strategist, Asia Pacific (ex-Japan) at Invesco.

“Powell (is) not committing to the size or the frequency of rate hikes and also the timing of the balance sheet reduction. I think that buys him a bit of wiggle room as to how quickly and with what velocity he wants to normalise monetary policy in the U.S. … it’s very data dependent and so we’re certainly watching other economic data that’s going to be released especially inflation data, inflation expectations data, which I think could trigger more aggressive monetary policy tightening.”

Asian shares also tumbled, with MSCI’s broad gauge of regional markets outside Japan down 1.6% in early trade on Thursday at its lowest level since early November 2020.

In Tokyo, the Nikkei fell 1.9%, touching its lowest point since December 2020.

The policy-sensitive U.S. 2-year yield jumped amid expectations of Fed tightening, rising to a top of 1.1780% in morning trade in Asia, a level last reached in February 2020. The benchmark 10-year yield also ticked up from Wednesday’s close, rising to 1.8548% from 1.846%.

The dollar rose on the back of higher yields, lifting the U.S. dollar index, which measures the greenback against major peers, to 96.557.

Adding to global investor concerns, the United States said on Wednesday it had set out a diplomatic path to address sweeping Russian demands in eastern Europe, as Moscow held security talks with Western countries and intensified its military build-up near Ukraine with new drills.

Worries over tensions between Russia and Ukraine had lifted crude prices above $90 per barrel a day earlier, a level last seen in October 2014.

U.S. officials say they are in talks with major energy-producing countries and companies worldwide over a potential diversion of supplies to Europe if Russia invades Ukraine, although the White House said it faces challenges finding alternative sources of energy supplies.