Home Headlines Analysis: U.S. banks face trillion-dollar reverse repo headache
Our website publishes news, press releases, opinion and advertorials on various financial organizations, products and services which are commissioned from various Companies, Organizations, PR agencies, Bloggers etc. These commissioned articles are commercial in nature. This is not to be considered as financial advice and should be considered only for information purposes. It does not reflect the views or opinion of our website and is not to be considered an endorsement or a recommendation. We cannot guarantee the accuracy or applicability of any information provided with respect to your individual or personal circumstances. Please seek Professional advice from a qualified professional before making any financial decisions. We link to various third-party websites, affiliate sales networks, and to our advertising partners websites. When you view or click on certain links available on our articles, our partners may compensate us for displaying the content to you or make a purchase or fill a form. This will not incur any additional charges to you. To make things simpler for you to identity or distinguish advertised or sponsored articles or links, you may consider all articles or links hosted on our site as a commercial article placement. We will not be responsible for any loss you may suffer as a result of any omission or inaccuracy on the website.
Headlines 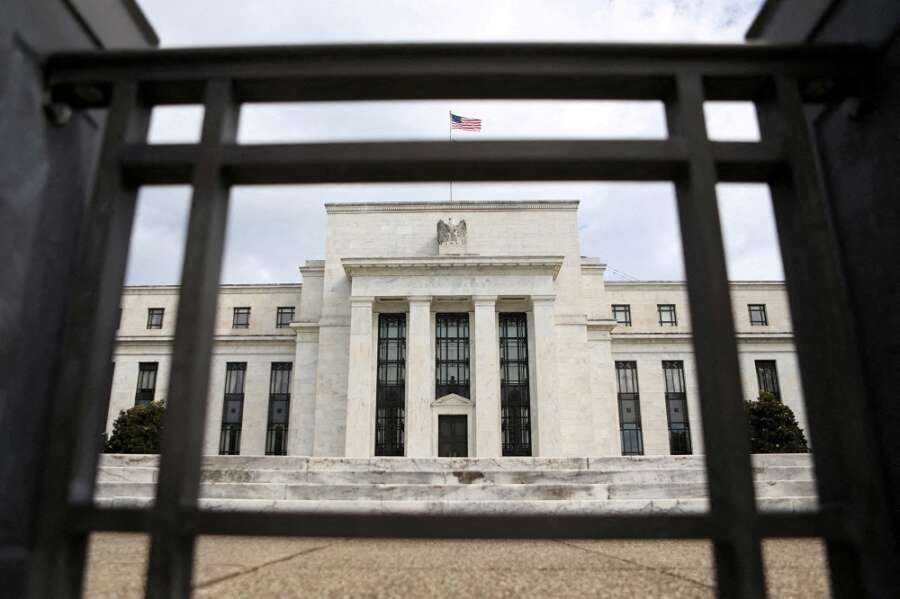 NEW YORK (Reuters) – The trillions of dollars in overnight cash tucked away daily at the Federal Reserve could turn into a major headache for banks that could squeeze their balance sheets and impair their ability to lend.

The Fed’s reverse repurchase facility (RRP) has attracted a wide array of market participants, helping mop up excess liquidity in the financial system. Led by money market funds, volume at the reverse repo window has topped $2 trillion for 39 straight days.

The Fed is paying a record reverse repo rate of 2.3% following its 75-basis-point interest rate hike last week. Barclays expects daily reverse repo levels to hit between $2.8 trillion and $3.0 trillion by the end of the year.

Investors are effectively taking deposits away from banks and putting them into government money market funds, which invest mainly in Treasuries and repos. These money funds, in turn, funnel the cash to the Fed’s overnight window.

Repo allocations from government money market funds have increased to nearly 40% of their assets currently, from around 30% at the start of the year, Barclays said.

The Fed will shrink its balance sheet by $95 billion per month from September, accelerating “quantitative tightening,” which started in June. The concern is that the outflow of deposits from banks into money market funds could reduce bank reserves at a rapid pace that could hinder lending activities to financial markets and the broader economy. 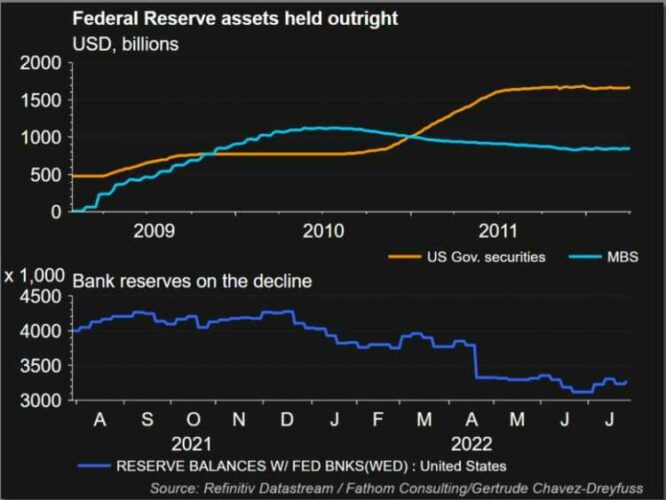 The decline in bank reserves could also lead to a spike in the repo and effective fed funds rate similar to what happened in September 2019 when bank reserves dwindled due to heavy withdrawals for tax payments and settlement of Treasury purchases at auctions. That forced the Fed to provide additional reserves to the banking system.

“The drift of reserves into money market funds and away from banks constitute movement of money away from financial markets,” said Matt Smith, investment director at asset manager Ruffer in London, which has $31 billion in assets under management.

For now, bank reserves are still considered abundant at $3.3 trillion, but the decline has been rapid, some market participants said. From a peak of nearly $4.3 trillion in December last year, bank reserves have declined about 23%. In the Fed’s previous quantitative tightening (QT), $1.3 trillion in liquidity was withdrawn in five years.

To be sure, there are other factors that have contributed to the decline in bank reserves, such as asset re-allocations and loan demand, analysts said.

Government money market fund assets have been fairly steady as of July 27, at $4.025 trillion, up about 0.1% from a week earlier, data from the Investment Company Institute showed. The shift of deposits to money funds has been a slow process.

“The Fed’s QT will shrink its balance sheet quickly. But bank reserves are set to fall much faster as cash shifts out of bank deposits to government-only money funds. We expect money funds to put this cash in the RRP,” wrote Joseph Abate, managing director at Barclays, in a research note.

Expectations that the U.S. Treasury will increase bill issuance for fiscal year 2023, which starts in October, could help ease the surfeit of inflows into the reverse repo window, analysts said.

Abate estimated that bank reserves will fall to $2.3 trillion this year, perilously near what he termed banks’ “minimally ample level” of $2 trillion, as the exit of deposits starts to weigh on their balance sheets.

Yet for many big banks, those deposits are unwanted anyway.

As the Fed’s balance sheet increased with quantitative easing during the pandemic, so did bank reserves deposited at the central bank. Once reserves reached a level at which banks were not willing to absorb the regulatory costs on their balance sheets, they started turning deposits away.

The Fed in April 2020 temporarily excluded Treasuries and central bank deposits from the supplementary leverage ratio (SLR), a capital adequacy measure, as an excess of bank deposits and Treasury bonds raised bank capital requirements on what are viewed as safe assets.

But the Fed let that SLR exclusion expire and big banks had to resume holding an extra layer of loss-absorbing capital against Treasuries and central bank deposits.

“Banks are still not keen to increase deposits due to regulatory costs in the absence of SLR relief and want to free up their balance sheet,” said Imran Siddiqui, portfolio manager at Mosaic Capital. “In a subtle way, they are sending a message to the Fed to provide some form of permanent SLR relief.”

Should the Fed tweak the SLR and give banks breathing room on regulatory costs, that should push these financial institutions to accept more deposits and help stabilize reserves. The Fed earlier this year said it would review this leverage ratio, but has yet to publish a proposal.

‘Living with COVID’: Where the pandemic could go next

Historic crown to be modified for King Charles’s...