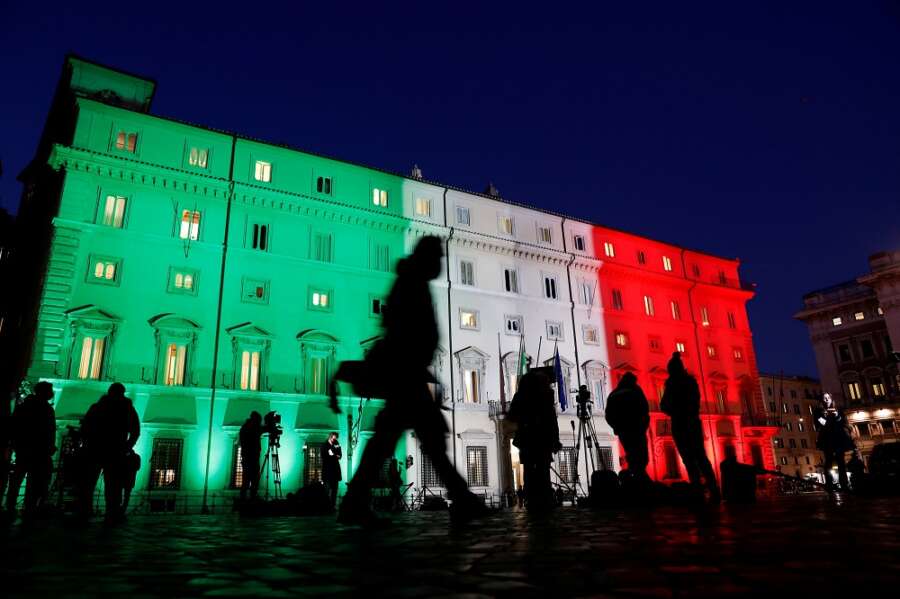 By Dhara Ranasinghe and Stefano Rebaudo

LONDON (Reuters) – A calming down of Italian government bonds, typically among the most volatile in the euro zone, suggests a sea change in the way foreign investors perceive the 2.3-trillion-euro ($2.7 trillion)market — the bloc’s biggest.

Volatility, the propensity of an asset to display wild and unpredictable price swings, is generally a negative for bond returns over time. So the message from one volatility indicator on BTPs, as Italian government bonds are known, will be welcomed by investors.

That indicator is an index of 30-day option-implied volatility on BTPs, which has fallen to around 50 basis points, around half its level a year ago and approaching levels seen for higher-rated French and German government bonds.

The BTP volatility index, based on a working paper from the European Stability Mechanism, is also the lowest since more than three years ago, when options on BTP futures first started trading.

“What we’re seeing in Italian bonds is a little bit of a replay of the convergence trade that we’ve seen in the past, when euro zone bond markets started to trade on this idea that over time every member state could issue (debt) at the same level,” said David Arnaud, a senior fund manager at Canada Life Asset Management.

He was referring to the period before the 2011-2012 crisis when weaker states such as Italy and Greece enjoyed borrowing costs only marginally above those of financially robust Germany or the Netherlands.

The yield gap ballooned during the crisis and then during periodic market selloffs, including last year, but has since snapped in. The steep volatility decline has followed and this time some believe it may last longer than before.

Several factors are driving the change in investor perceptions towards Italy. First is the European Central Bank’s bond-buying programme which has pinned down borrowing costs across the euro area.

Second is the European Union’s 800-billion-euro post-pandemic recovery fund, of which Italy is a major beneficiary, standing to receive some 200 billion euros in grants and loans in the coming years. Since then, Italy’s anti-euro parties, including the far-right League, have become much less vocal in their opposition to the EU.

All this has squeezed Italian yields lower, even as the COVID-19 crisis is projected to send Italy’s debt-to-GDP ratio — Europe’s second-highest — towards 180%.

“We think that the market has underestimated the impact of the recovery plan, particularly in Italy, and Draghi has under-promised and will over-deliver,” said Jacob Nell, Morgan Stanley’s head of European economics.

Last week the Italian government agreed amendments to a law overhauling the criminal justice system, a key reform plank included in the Recovery and Resilience Plan.

It’s not just volatility gauges showing Italian bonds converging with higher-rated peers. Italian and German yields have moved in lock-step over recent months, suggesting investors view Italy as less risky than before, at least for now.

Unicredit analysts estimate that 75-day correlations between Italian and German bonds have risen to 0.8 from around 0.4 just before Draghi’s appointment. Back in 2018, just after an election in Italy that boosted anti-euro parties, the correlation was -0.4, they said.

Correlations between Spanish and German debt are broadly steady this year.

“The increase in the correlation between BTP and Bund yields indicates that the market is dealing with Italian debt as an asset driven more by the general macro fundamentals than by country-specific factors,” Luca Cazzulani, UniCredit’s co-head of strategy research, said.

He forecast the correlation at current high levels for a “prolonged period.”

“These two factors (a Draghi-led government and a dovish ECB stance) need to stay in play. If there was a hawkish turn by the European Central Bank, it would be challenging for Italian debt,” Cazzulani added.

(Reporting by Dhara Ranasinghe in London and Stefano Rebaudo in Milan; Editing by Sujata Rao and Timothy Heritage)

Investing in Luxury: Watches That Increase in Value